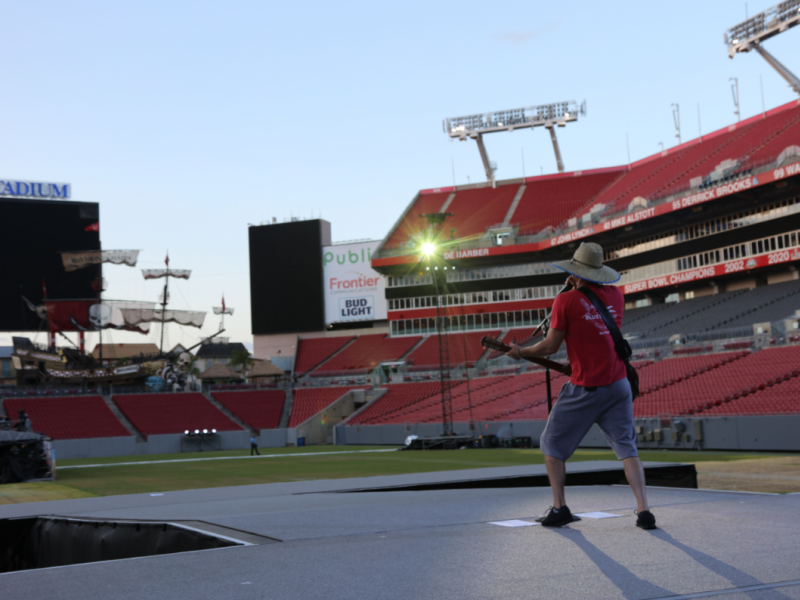 TAMPA, Fla. – Earlier in the week, Tampa Bay alternative weekly Creative Loafing noted you could hear the music pouring out of Raymond James Stadium on N. Dale Mabry Highway. Four years since walking offstage at Gillette Stadium, Kenny Chesney and his band are on the verge of kicking off the Here And Now 2022 Tour – and the fans are evidently as excited as he is.

Having moved the stage as far back into the end zone as possible, shaving the sightlines and selling every obstructed view ticket – creating new seats at least five times – the available ticket count is down to 20 single seats. Those will most likely be gone before this release arrives.

“It has been absolutely the best few days,” Chesney says. “Loading in, seeing my road family all coming together to raise a stage, laughing in catering, getting the videos and lights dialed in! It’s a certain kind of person who loves the music as much as we do – No Shoes Nation is counted in that – and it feels so good to be back together, playing music and just looking in each other’s eyes.”

With the stage loaded in, flooring going down and chairs set up, Chesney made sure there was a place for every possible fan. Talking to USA TODAY for a feature headlined “Kenny Chesney wants fans to know ‘I gave every cell of my body’ as he embarks on stadium tour,” the only country artist on Billboard’s Top 10 Touring Acts of the Past 25 Years for the last 13 years admitted to writer Melissa Ruggieri, “A lot of life has happened since we were last on stage. It’s going to be pretty emotional. We didn’t take this time off because we wanted to; it was taken from us. There were moments during the first year of COVID that I was wondering if this moment would ever come. This is what we do.”

Online now – and in print top of week – it’s a reflective conversation that measures his life, the power of music and why rocking stadiums is in his veins. For the songwriter/superstar from East Tennessee, it’s not just about how it feels when 50,000+ people are in the moment; it’s what is taken away from the coming together and embracing the songs.

“Some of these people, the ones who make No Shoes Nation what it is, they remind you how much of their life exists in these songs. You know, you look out, see someone singing and you can almost get lost – because you can just tell: this isn’t a song, this is something that’s personal, that’s marked their life. To be able to share that again, well, that’s why every single one of us standing on that stage does this...”

The Here And Now 2022 Tour is presented by Blue Chair Bay and fueled by MARATHON. Get ready for a long hot summer – and a whole lot of music. Tampa may be already gone, but there’s plenty of music ahead.