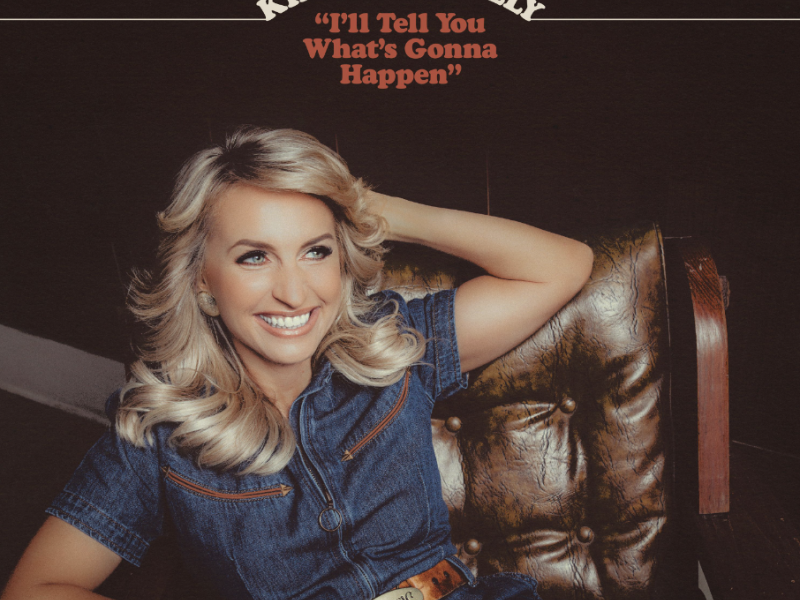 NASHVILLE, Tenn. – On the heels of announcing of her label debut, I’ll Tell You What’s Gonna Happen, arriving July 8 via Show Dog Nashville in partnership with Thirty Tigers, singer/songwriter Kimberly Kelly releases another taste from the forthcoming album with her take on “Black Rose.” Listen HERE.

Produced by Brett Tyler, Kelly’s husband a hit songwriter himself with No. 1s like “Cold Beer Calling My Name” under his belt and written by Kelly’s friend and mentor Country Music Hall of Famer Billy Joe Shaver, her powerful take on the track closes out an album that unintentionally became a tribute to the late country music legend.

“Billy Joe was such an important part of my journey into music, and since we used his quote as the title of the album, it just seemed like we should end with one of his songs,” shares Kelly. “We listened to his entire catalog and just couldn’t decide what to cut. We landed on this one thinking we could tell it from Billy Joe's point of view. He was strong in his faith, but also an outlaw. ‘The second time I done it on my own.’ I can relate to that line. Sometimes you do something again just because you want to.”

Kelly continues, “We put the voicemail he left me on the end of the track to bring it all the way around. When we started recording, I didn't set out to make a tribute record to Billy Joe, but I love how this whole project came out and I will always love him.”

Fans can catch Kelly this Tuesday, June 28, at 7 pm CT as she concludes her 3-week residency at Nashville’s legendary venue, The Basement. For more information visit, thebasementnashville.com.

A native of Lorena, Texas, Kelly spent years in both the Texas and Nashville music scenes earning an education in experiences that have made her both fearless in her approach to creating and unafraid to defy convention when it comes to industry expectations. Those years of hard work, all while also earning a Master’s degree and working fulltime, culminated last summer in a long-awaited record deal with Show Dog Nashville. Now she is set to make her label debut. Pre-order or pre-save I'll Tell You What's Gonna Happen, HERE.

The album is already earning kudos including praise from legendary singer/songwriter and fellow Texan, Radney Foster, who shared, “If you like your Country music with fiddles and steel guitars, melodies that soar and a singer who unapologetically sings with a twang, you will love Kimberly Kelly. She’s a great songwriter and her timeless voice delivers power and emotion on this fun but often poignant collection. Don’t try to drive while you’re listening to ‘Person That You Marry.’ Don’t ask me how I know.”

Off stage Kelly possesses an inviting warmth mixed with sly self-deprecation, a winsome combo only earned with some life experience, self-awareness and nothing to prove on stage just the goods to stop a listener in their tracks. “This is not my first rodeo,” Kelly says of her Show Dog Nashville label debut. “I worked really hard in Texas before I came to Nashville. I wrote songs, put out records, did a radio tour, and played every weekend while going to school and working full-time.”

The album’s title, I’ll Tell You What’s Gonna Happen, is a clever nod to her friend and fellow Texas musician, the late Country Music Hall of Famer, Billy Joe Shaver. The abbreviated quote comes from the better-than-fiction-true story of Shaver forcing his way into a Waylon Jennings recording session after the star tried to renege on recording some of his songs. Brushing off a $100 bill to go away, Shaver said to Jennings, “I'll tell you what's gonna happen. You're gonna either listen to these songs or I'm gonna whip your ass.” Waylon agreed to listen to one. The rest is history in the form of Jennings' 1973 Honky Tonk Heroes album, on which every song but one was written by Shaver.

“I landed on this album title on a dare,” Kelly says. “I was like, ‘Sure. What do I care?’ I did the Texas music scene, I’ve done time in Nashville, and I thought my time had passed when I got offered my record deal. My husband could keep writing songs and I’d just be a speech therapist. So I made this album like it's the last one I’ll ever get to make and the title is my mantra so to speak. I love good songs, and I let the best ones win whether I wrote them or not. It’s a compilation I’m proud of, and I’m thrilled for people to hear them!”