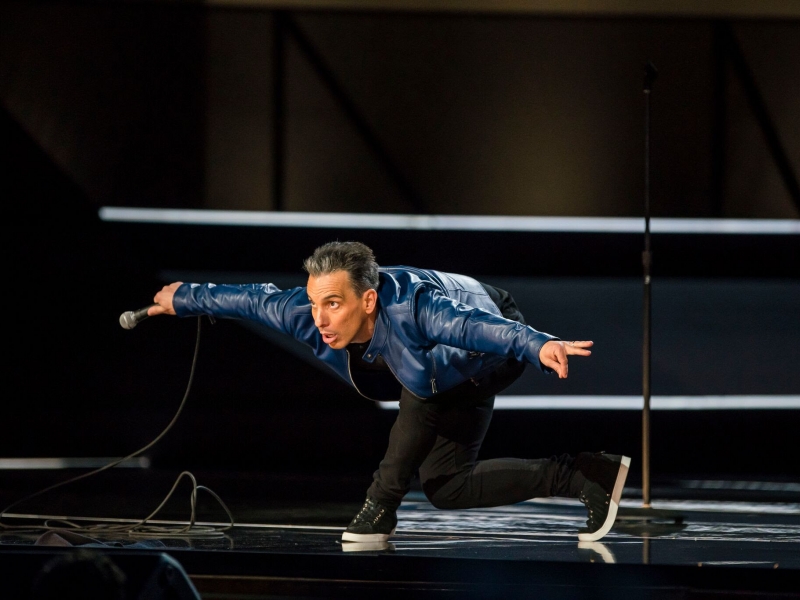 Comedian, actor and best-selling author Sebastian Maniscalco is having “the biggest week of his career” to-date according to Entertainment Weekly. The Green Book star will be taking the Madison Square Garden stage not once but four times this weekend, January 19-20. Dubbed “comedy’s new superstar” in a profile Friday by “NBC Nightly News with Lester Holt,” Maniscalco stopped by SiriusXM’s “The Howard Stern Show” for a 90-minute interview with the King of All Media today to discuss his new Netflix special, “Stay Hungry” (filmed at the Legendary Radio City Music Hall) streaming now, acting with Viggo Mortensen in the award-winning film Green Book, his blockbuster tour and more.
During the 90-minute conversation Stern shared a clip of his show from 11 years ago when he first mentioned Sebastian and his comedy. He had trouble pronouncing Sebastian’s last name. But not today. Over a decade later Stern shared with listeners, “Sebastian Maniscalco, that is a name you should know.”

Stern continued, “I’ve seen your special. There is some very funny stuff in there,” extolling to Sebastian, “you are highly relatable.”
Additional media appearances for Maniscalco this week include stops on the 8 a.m. hour of NBC’s “TODAY Show” on Wednesday, Jan. 16, ABC’s “GMA Day” on Thursday, Jan. 17 and NBC’s “Tonight Show Starring Jimmy Fallon” on Friday, Jan. 18. Check local listings for times.

Distinguished by The New York Times as having his “own kind of panache,” Maniscalco’s live performances have become critically-acclaimed events “embraced with thundering applause and tear-inducing laughter,” according to a recent Billboard review which described his Sept. 8, sold-out Greek Theatre performance as “devastatingly full-force comedy.”

With a string of record-breaking sold-out comedy appearances, a best-selling memoir Stay Hungry and a role in the Golden Globe-winning Green Book, 2018 was a milestone year, culminating in Maniscalco receiving Billboard’s inaugural Comedian of the Year award. And 2019 is already shaping up to be another landmark year for one of Forbes’ Highest Paid Comedians. With a role in Martin Scorsese’s upcoming picture The Irishman as well as a just released Netflix special streaming now, Maniscalco can also add playing FOUR shows at ‘The Garden’ to his list of accomplishments.

Maniscalco’s wildly successful Stay Hungry Tour will continue through May 18, 2019 with over 30 stops across the U.S. Tickets and VIP packages are on sale now.