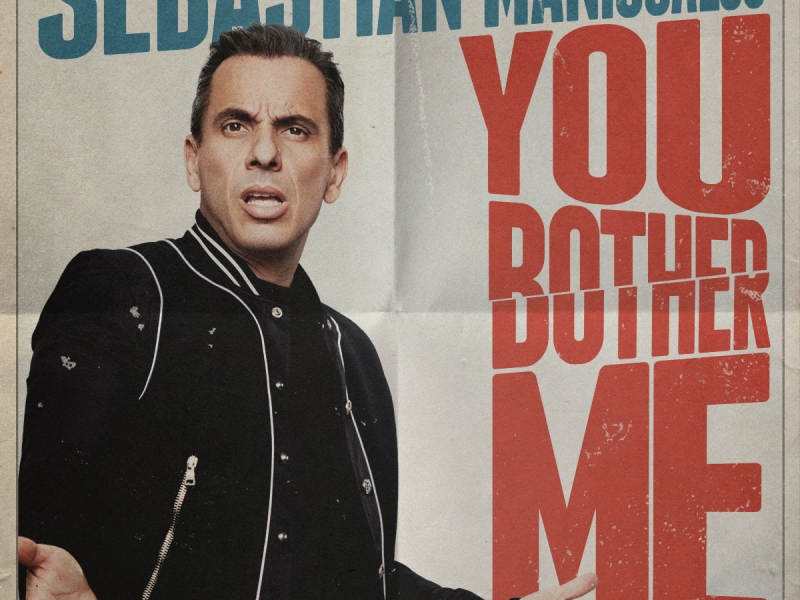 Tickets On Sale Beginning Friday, Sept. 27, at 10 am Local Time

Fresh off a wildly successful, two-year-plus run on his Stay Hungry Tour, Billboard’s 2018 Comedian of the Year Sebastian Maniscalco returned this month with his new You Bother Me tour. Now comes word the man the New York Times calls “America’s hottest comic” has extended the initial run adding 20 more dates in 2020 across the U.S. and Canada. Tickets go on sale beginning this Friday, Sept. 27, at 10 am local time. American Express® Card Members can purchase tickets for many dates before the general public beginning Wednesday, Sept. 25 at 10am local time through Thursday, Sept. 26 at 10pm local time. To purchase tickets visit sebastianlive.com.Maniscalco will appear on NBC's "The Tonight Show Starring Jimmy Fallon" this Friday, Sept. 27 to discuss his new tour as well as his role in Martin Scorsese’s forthcoming film, The Irishman. Touted as ‘the comedian’s comedian” by People, Maniscalco finds himself “at the vanguard of a live comedy revolution” according to Pollstar. And the man “NBC Nightly News” called “comedy’s new superstar” is showing no signs of slowing down.

With stops in high-profile cities and arenas such as Boston’s TD Garden, Los Angeles’s The Forum and Montreal’s Bell Centre, the new tour will also have the Chicago native returning to the Windy City for a performance at the famed United Center in Chicago Nov. 2.

“There’s nothing like going to a live show and seeing it in real life,” Maniscalco says in a recent interview with Forbes, who named him as one of the Top 10 highest-grossing stand-up comedians in the world in 2019. “Is there a comedy bubble that’s going to pop soon? Yet to be seen, but as I’ve been in this business, it has gotten progressively better each year and I don’t see it slowing down.”

Not only has the star power of Maniscalco rocketed upward in the past few years thanks to shows described by Billboard as ‘devastatingly full force comedy,” but also due to his high energy Netflix Original special – “Stay Hungry”- streaming now. The special, which was taped over a span of five sold-out shows at the legendary Radio City Music Hall, had Maniscalco playing for a total of 28,312 long-time fans and early believers in his unique comedic voice.

Vulture recently said of the entertainer’s journey to success, “Maniscalco, without a breakout TV or film role, built a tremendous fan base the old-fashioned way: one joke at a time, one audience at a time." Although he may not have started his career in film, Maniscalco’s loyal fans will continue to see more acting roles from him like his performance opposite Robert DeNiro, Al Pacino and Joe Pesci in Scorsese’s The Irishman. The film arrives in select theaters on Nov. 1 and premieres on Netflix Nov. 27. Maniscalco is set to attend the world premiere of the film with the star-studded cast at this year’s New York Film Festival on Sept. 27.

About Sebastian Maniscalco:
With a string of record-breaking sold-out comedy appearances, a best-selling memoir Stay Hungry and a role in the award-winning Green Book, 2018 was a milestone year that culminated in comedian, actor and best-selling author Sebastian Maniscalco receiving Billboard’s inaugural Comedian of the Year award. The always “hungry” multi-hyphenate followed up that success with arguably “the biggest week of his career” to-date according to Entertainment Weekly by kicking off 2019 with a week that included performing four shows at “The World’s Most Famous Arena,” Madison Square Garden, and releasing his new Netflix Original special– “Stay Hungry” – streaming now. He also served as host of the 2019 MTV VMAs.

Fans will continue to see more serious film roles from Maniscalco with a performance opposite Robert DeNiro, Al Pacino and Joe Pesci in Martin Scorsese’s The Irishman on Netflix Nov. 27. Maniscalco continues an already remarkable year wrapping his blockbuster Stay Hungry Tour and kicking off his new You Bother Me Tour. To purchase tickets, visit sebastianlive.com.