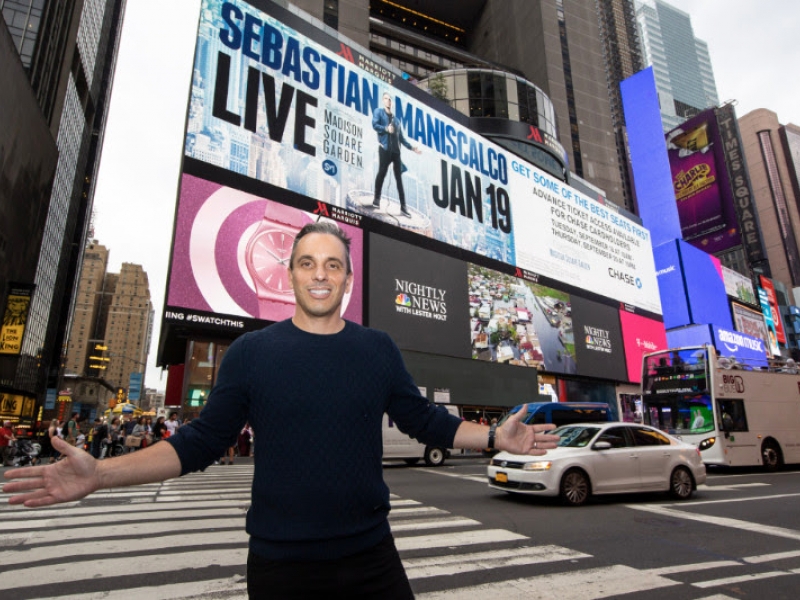 Billboard opined earlier this week, comedian, actor and best-selling author Sebastian Maniscalco “is starting the new year at the top of the comedy game,” announcing on Monday he would be taking the Madison Square Garden stage on Saturday, January 19, 2019 at 7:00PM. Dubbed “one of standup comedy's breakthrough performers” in a recent CBS Sunday Morning profile, and “the comedian’s comedian” by PEOPLE, Maniscalco made appearances Tuesday on NBC’s “Megyn Kelly TODAY” and “Late Night with Seth Meyers” where he revealed that after only 24 hours since announcing his next performance in New York City at Madison Square Garden on January 19, a second show would be added for Sunday, January 20, 2019 due to overwhelming demand.

Distinguished by the New York Times as having his “own kind of panache,” Maniscalco’s live performances have become critically-acclaimed events “embraced with thundering applause and tear-inducing laughter,” according to a recent Billboard review which described his Sept. 8, sold-out Greek Theatre performance as “devastatingly full-force comedy.”

With a string of record-breaking sold-out comedy appearances, a best-selling memoir Stay Hungry, five sold-out shows at Radio City Music Hall earlier this year, an appearance in the summer film TAG as well as appearances in upcoming fall films Cruise and Green Book (winner of Toronto Film Fest’s 2018 People’s Choice Award), 2018 has been a milestone year, culminating in Maniscalco receiving Billboard’s inaugural Comedian of the Year award this November. And 2019 is already shaping up to be another banner year for one of Forbes’ Highest Paid Comedians. With a role in Martin Scorsese’s 2019 picture The Irishman as well as a new Netflix special coming early next year, Maniscalco can also add playing TWO nights at ‘The Garden’ to his list of accomplishments.

Chase cardholders will have advance access to tickets to the newly added show now through Thursday, September 20 at 10:00PM ET. Tickets and VIP packages for both nights go on sale to the general public on Friday, September 21 at 10:00AM ET and will be available through Ticketmaster Charge by Phone (1-866-858-0008), ticketmaster.comand all Ticketmaster Outlets. Tickets are also available in person starting on Saturday, September 22 at the Madison Square Garden, Beacon Theatre and Radio City Music Hall box offices.