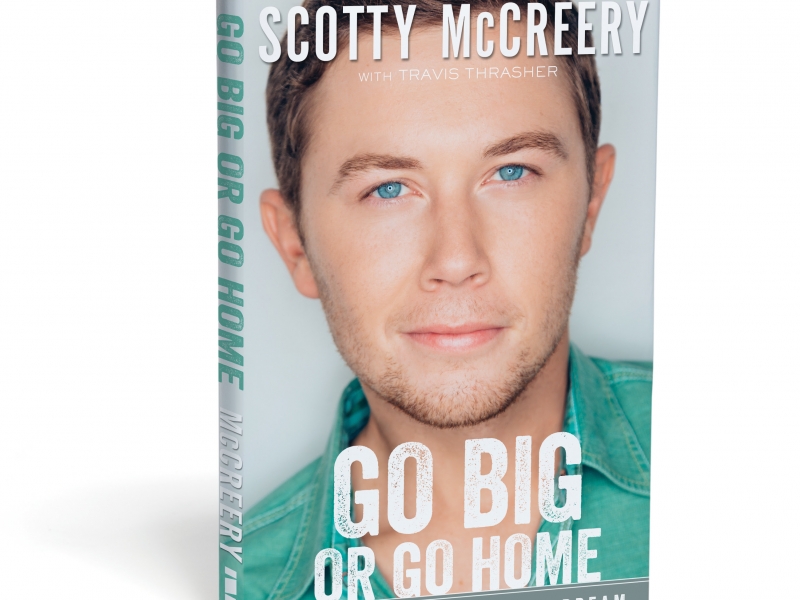 Go Big or Go Home is now available for fans to pre-order on Amazon.

Go Big or Go Home narrates McCreery's journey from a kid imitating Elvis on the school bus to 30 million across America tuning in to see him win season ten of "American Idol” to building a successful country music career. Now just following his 22ndbirthday as he completes his eagerly awaited fourth album and was recently named Nash Country Weekly’s 2015 “Sexiest Man,” McCreery shares a glimpse of where he came from and the impact his faith, family and friends have had on a humble guy who keeps asking “why me?” This is his journey from his North Carolina roots to winning America’s most popular singing competition and moving on to launch the musical career he had always dreamt about.

McCreery captured the hearts of millions of viewers nationwide after winning season ten of “American Idol” in 2011 at the age of 17. Subsequently, the talented vocalist released his debut break-out album,Clear As Day, which was the best-selling solo album released by a country artist in 2011. He also became the youngest man in history to have his first album debut atop the all-genre Billboard Top 200 Albums chart. McCreery has sold more than 2.5 million albums and received both Platinum and Gold album certifications. He has earned three Platinum singles (“I Love You This Big,” “The Trouble With Girls” and the Top Ten hit “See You Tonight”) and one Gold single (the Top Ten hit “Feelin’ It”). McCreery earned the Academy of Country Music Award for New Artist of the Year in 2011; CMT Music Award for Breakthrough Video of the Year (for “The Trouble With Girls”) in 2012; and two American Country Awards: New Artist of the Year in 2011 and Breakthrough Artist of the Year in 2013.

McCreery toured with Rascal Flatts as the Special Guest on their RIOT TOUR 2015 this summer in addition to performing solo dates throughout the year. In-between concerts, he has been writing and recording songs for his highly anticipated new studio album, due out in 2016. The first single from the album, “Southern Belle” can be heard on country radio now and can be previewed and purchased online at http://umgn.us/southernbelle. The recently released music video for “Southern Belle” can be viewed here: http://bit.ly/1kuiBDe.

Scotty McCreery burst onto the national music scene in 2011 at age 17, quickly establishing himself as one of country music’s hottest new stars. Now 22 years old, the talented singer/songwriter has sold more than 2.5 million albums and received both Platinum and Gold album certifications, debuted three consecutive albums at No. 1 on a Billboard chart, achieved one Gold and three Platinum-certified singles and two Top Ten hits, toured with Brad Paisley, The Band Perry and Rascal Flatts, headlined his own tours, earned industry and fan accolades, amassed more than three million followers on Facebook and Twitter, received more than 150 million YouTube views…and he’s just getting started! For tour schedules and more information, visit www.ScottyMcCreery.com. Follow McCreery on social media at Facebook, Twitter, and Instagram.


Book Details:
Go Big or Go Home: The Journey Toward the Dream
By Scotty McCreery with Travis Thrasher
Zondervan
ON SALE: May 3, 2016
NOW AVAILABLE FOR PRE-ORDER
#GoBigOrGoHomeBook
$24.99 hardcover
ISBN: 9780310345220