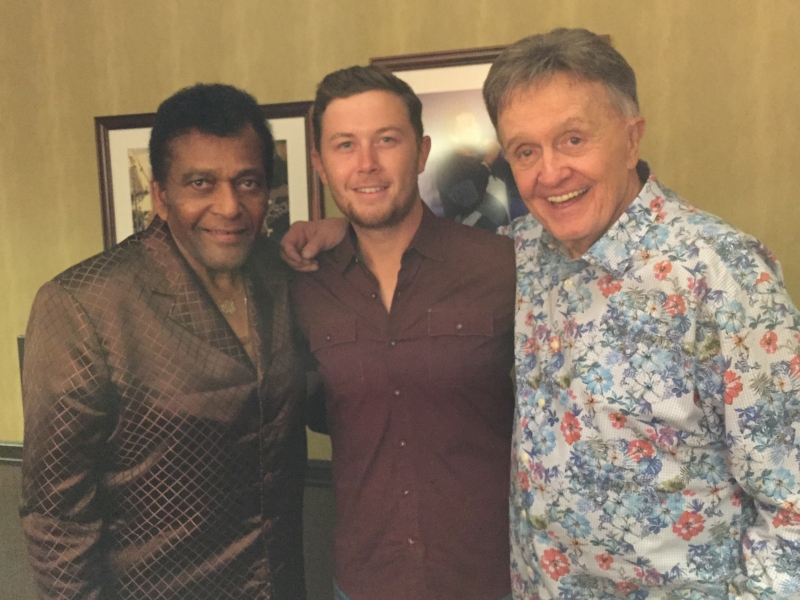 Sunday, June 12, 2016 - 8:15am
Related Client:
Scotty McCreery
NASHVILLE, Tenn. – (June 12, 2016) – On Friday night June 10, Scotty McCreery returned to the Grand Ole Opry to perform during the 2016 CMA Music Festival, where he received a standing ovation from the sold-out crowd after performing a new and not yet released song, "Five More Minutes." Backstage after his show, he spent time with two of his musical heroes, Country Music Hall of Fame members Charley Pride and Bill Anderson.

"My favorite place to perform is at the Grand Ole Opry," said McCreery. "Being on the stage where legends have stood is an awesome feeling. Being able to hang out with legends like Charley Pride and Bill Anderson backstage is beyond imaginable to me. A little earlier in the evening I was talking with Jeannie Seely and Larry Gatlin. It's such a privilege to get to know these amazing and talented entertainers who paved the way for all of us. This could only happen at the Opry. What a great night!"

Earlier in the day, McCreery held his Fifth Annual Fan Club Party in the Opry's Studio A. During the photo line where he meets with each attendee, a group of his fan club members surprised him with a donation of $1,200 to the Opry Trust Fund in his honor. The Opry Trust Fund's mission is to help those in the country music industry when they need it most by offering financial assistance during their time of need.

"I have the greatest fans in the world, and I love getting to spend time with them at my fan club party," said the ACM and CMT Award winner. "Having them make a donation in my name to the Opry Trust Fund shows how generous and thoughtful my fans are. I'm so pleased they chose such a great cause to support as the Opry Trust Fund."

During the week of CMA Music Festival, McCreery also performed to a packed, near-capacity crowd on the Chevrolet Riverfront Stage. Now an author, he met hundreds of his fans while signing copies of his new book, Go Big or Go Home: The Journey Toward The Dream, at the Country Music Hall of Fame and Museum. He played first base for Team Opry during the City of Hope Celebrity Softball Game, performed as part of the Seventh Annual Darius & Friends Benefit Concert for St. Jude Children's Research Hospital, and served as a judge for the Eckrich Music City Sing-Off on the Honky Tonk Alley Stage.

McCreery returns to the road on June 18 in Saginaw, Michigan when he performs on the 2016 KCQ Country Music Fest.

Scotty McCreery burst onto the national music scene in 2011 at age 17 as the winner of “American Idol” Season 10, quickly establishing himself as one of country music’s hottest new stars. Now 22 years old, the talented singer/songwriter has sold more than 2.5 million albums. He made history as both the youngest artist and the first male country artist to debut his first studio album atop the all-genre Billboard Top 200 chart with his Platinum-certified album Clear as Day.  All three of his albums have debuted at No. 1 on a Billboard chart including the Gold-certified Christmas with Scotty McCreery and his most recent album, See You Tonight.  He has achieved one Gold (the Top Ten hit “Feelin’ It”) and three Platinum-certified singles (“The Trouble with Girls,” “I Love You This Big,” and the Top Ten hit “See You Tonight”). McCreery has earned the Academy of Country Music's New Artist of the Year Award (2011), CMT Music Award for Breakthrough Video of the Year (for "The Trouble with Girls" in 2012), American Country Award for New Artist of the Year (2011) and Breakthrough Artist of the Year (2013), and a BMI Award for writing one of the Top 50 Country Songs of 2015 ("See You Tonight"). The readers of NASH Country Weekly Magazine voted him “Country Music’s Sexiest Man 2015” and “Country Music’s Hottest Bachlor 2016,” and the readers of the Los Angeles Times named him the “Best American Idol.” For more information, please visit www.ScottyMcCreery.com. Follow him on Facebook, Twitter, and Instagram.
# # #
Media Contact: