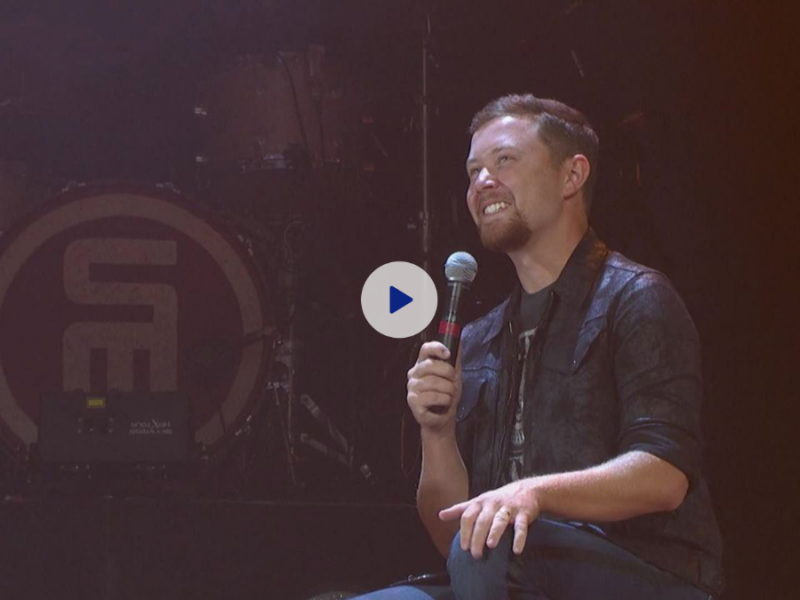 Triple Tigers multi-Platinum selling recording artist Scotty McCreery returned to Ryman Auditorium Friday, Sept. 4, performing in the ‘LIVE AT THE RYMAN’ series to a sold-out limited in-venue audience and via livestream. Prior to taking the stage that evening, he was surprised during an interview on HLN’s “Morning Express” with a plaque commemorating the RIAA-Gold Certification of the most recent of his three consecutive No. 1’s “In Between.”

“It was a fun surprise to receive a gold plaque for ‘In Between’ during ‘Morning Express,’” shares McCreery. “The fans are the reason why the song was certified gold, so I wanted to share the moment with them again on my livestream Q&A moderated by my friend Bill Cody.”

Last week, the North Carolina native announced the first taste of new music from a forthcoming album with upcoming single “You Time,” set for release Sept. 23, and gave the debut performance on the historic Ryman stage.
“Performing at the Ryman is always an honor,” says McCreery. “Giving my debut performance of ‘You Time’ on that stage is something I’ll always treasure.”
Written by McCreery with Frank Rogers and Aaron Eshuis, the up-tempo track is a bouncy love letter to wife Gabi with McCreery reflecting on both their busy work schedules and just wanting her all to himself. The song (and the upcoming album) was produced by Rogers, Eshuis and Derek Wells, who all produced Seasons Change. Fans can pre-save “You Time” HERE.

McCreery’s return to the Ryman stage marks his second appearance this year. His sold-out performance on March 11 was just two days before the venue paused all shows with a live audience, where he was presented with a Gold album for RIAA Gold-certified Seasons Change.

“In Between” follows the RIAA Platinum-Certified “This Is It” and Double-Platinum Certified “Five More Minutes.”

About Scotty McCreery
McCreery achieved new heights by earning three back-to-back No. 1 hits from his most recent album Seasons Change, the RIAA Gold-certified project which debuted at No. 1 on the Billboard Country Album chart: the RIAA Double Platinum-certified “Five More Minutes,” the RIAA Platinum-certified “This is It,” which stayed at the top of the charts for two weeks, and RIAA Gold-certified “In Between.” His upcoming single “You Time” from the forthcoming follow-up to Seasons Change is set for release Sept. 23. He co-wrote all 11 songs on Seasons Change. All four of his albums have debuted at No. 1 on a Billboard Albums chart, with current combined sales surpassing 3 million copies. He’s earned one Double Platinum, four Platinum and one Gold singles; won the 10th season of “American Idol” in 2011; was named the ACM New Artist of the Year in 2011; won the CMT Music Award for Breakthrough Video of the Year (“The Trouble with Girls”) in 2012; American Country Awards for New Artist of the Year in 2011 and Breakthrough Artist of the Year in 2013; BMI Awards for writing One of the Top 50 Country Songs of the Year three times (in 2015 for “See You Tonight,” in 2018 for “Five More Minutes,” and in 2019 for “This is It”); a Carolina Beach Music Award for National Dance/Shag Song of the Year (“Barefootin’”) in 2018; and the NSAI Nashville Songwriter Award for One of the Top Ten Songs I Wish I’d Written (“Five More Minutes”) in 2018. The North Carolina native released his first book, Go Big or Go Home: The Journey Toward the Dream, in 2016; it was recently re-released in paperback in 2020. McCreery launched his recording career by making history in 2011 as both the first country artist and the youngest male artist of any genre to debut his first studio album, the Platinum-certified Clear as Day, at No. 1 on the all-genre Billboard Top 200 Albums chart. For more information, visit  ScottyMcCreery.com.