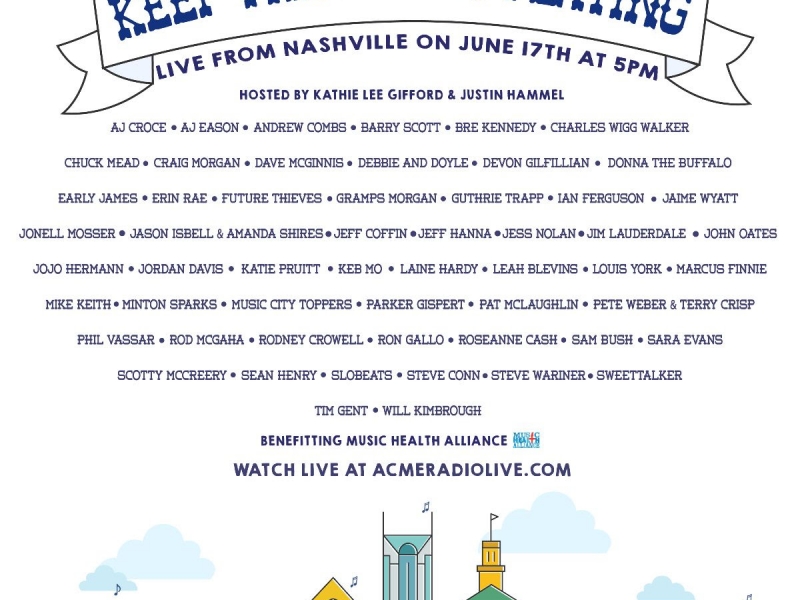 With his current single “In Between” climbing the charts reaching the Top 5 on the Mediabase/Country Aircheck Country Singles Chart and No. 7 on the Billboard Country Airplay Chart, Scotty McCreery is set to take over American Songwriter’s Instagram on Monday, June 15 at 6 p.m. CT. He will also take part in the “Keep The Music Playing” live stream event benefiting Music Health Alliance on Wednesday, June 17 at 5 p.m. CT.

Kicking off the week, the singer/songwriter will first appear on Instagram Live via American Songwriter to perform songs from his RIAA Gold-Certified Seasons Change as well as host a Q&A session with some of his favorite songwriting partners. McCreery co-wrote all 11 tracks on the album, including his two back-to-back No. 1’s, the RIAA Double Platinum-certified “Five More Minutes” and the RIAA Platinum-certified “This Is It” as well as his current smash “In Between.”

Wednesday, McCreery is also set to join Rosanne Cash, Rodney Crowell, Jordan Davis, Sara Evans, Jason Isbell & Amanda Shires, Keb Mo, Craig Morgan, John Oates, Steve Wariner and more for “Keep The Music Playing,” a live stream fundraiser hosted by Acme Radio Live and sponsored by Jack Daniel’s benefiting Music Health Alliance on June 17 at 5 p.m. CT. Through the Spotify COVID-19 Music Relief Project, Spotify will match all donations to Music Health Alliance, dollar for dollar, up to a collective total of $10 million. “Keep The Music Playing” will air on AcmeRadioLive.com, Facebook and YouTube. Donations can be made HERE.Speaking of Spotify, McCreery is the current cover and lead track on Spotify’s “Hot Country” Playlist. The playlist, which features today’s top country hits of the week, has more than 5.8 million followers. Listen to the playlist HERE.

While following “safer at home” guidelines since mid-March, McCreery has already given more than 80 live-stream performances ranging from Twitch Stream Aid, “Circle Sessions,” “Feed the Front Line Live, Presented by CMT” and numerous Facebook and Instagram Live events with country radio stations across the nation and media outlets, which he has dubbed his “Somewhere in Quarantine Tour.”

Hard at work on the follow up to his Seasons Change, McCreery continues to reach new career milestones. Last month he hit 100 million views on YouTube for “Five More Minutes”– making it one of only eight official music videos for country songs that have reached No. 1 on the Mediabase / Country Aircheck Country Singles Chart in the last two years to achieve this distinction. In April, McCreery became the first country music artist to present a virtual concert in an online gaming world on Club Cooee, performing for two consecutive weekends.