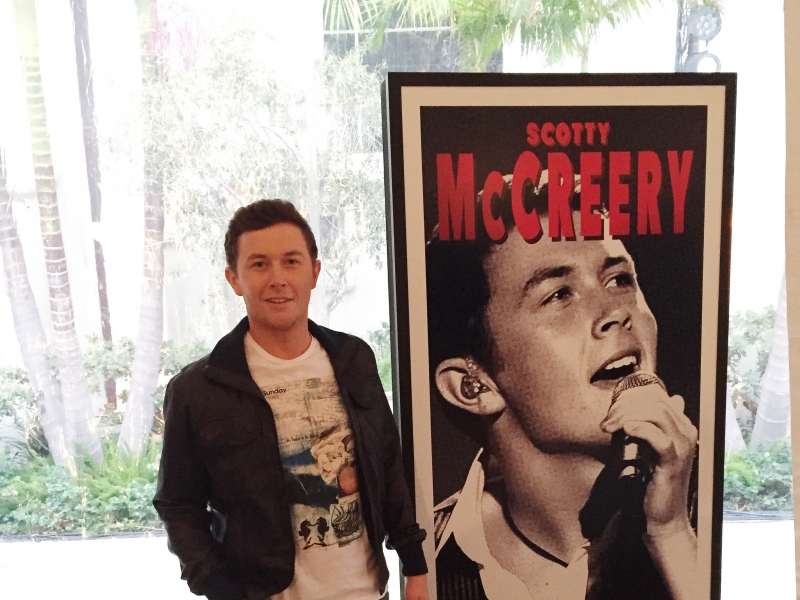 NASHVILLE, Tenn. – (Feb. 5, 2015) – Multi-Platinum-selling country music sensation Scotty McCreery returned to his roots earlier this week when he taped an episode of the Farewell Season of “American Idol.” For three days, the Season Ten champion mentored two of the Top 24 contestants (their names cannot be revealed at this time) and shared lessons learned from both his experience on the iconic television show and in his ACM and CMT Award-winning career. Much to the excitement of the studio audience, the entertainer also performed duets with both singers. “American Idol,” featuring McCreery, along with five other returning Idols, will air nextThursday, February 11 at 8:00 PM ET (7:00 PM CT) on the FOX Television Network.

"I remember how important it was to me during my time on 'Idol' to meet and learn from all the great artists who visited the set and offered their advice," said McCreery. "I was proud to be able to come back and offer whatever guidance I could to my two talented contestants. This is their season and their show. I was there to help them shine...and I believe they both did!"

McCreery is on the road next week performing concerts onFeb. 12 at the Canton Palace Theater in Canton, Ohio; Feb. 13at the Secrest in Zanesville, Ohio; and Feb. 14 at the River City Casino in St. Louis, Missouri. He will release his first book, Go Big or Go Home: The Journey Toward the Dream, on May 3. The book is available now for pre-sale at Amazon, Barnes and Noble, and ChristianBook.com.

At age 17, McCreery burst onto the national music scene in 2011 as the winner of “American Idol” Season Ten and quickly established himself as one of country music’s hottest new stars. Now 22 years old, the talented singer/songwriter has sold more than 2.5 million albums. He made history as both the youngest artist and the first male country artist to debut his first studio album atop the all-genre Billboard Top 200 chart with the Platinum-certified Clear as Day. All three of his albums debuted at No. 1 on a Billboard chart including the Gold-certified Christmas with Scotty McCreery and his most recent album, See You Tonight. He has achieved one Gold (the Top Ten hit “Feelin’ It”) and three Platinum-certified singles (“The Trouble with Girls,” “I Love You This Big,” and the Top Ten hit “See You Tonight”) and toured with Brad Paisley and Rascal Flatts, among other artists. McCreery has earned the Academy of Country Music's New Artist of the Year Award (2011), CMT Music Award for Breakthrough Video of the Year (for "The Trouble with Girls" in 2012), American Country Award for New Artist of the Year (2011) and Breakthrough Artist of the Year (2013), and a BMI Award for writing one of the Top 50 Country Songs of 2015 ("See You Tonight"). The readers of NASH Country Weekly Magazine voted him “Country Music’s Sexiest Man 2015.” Tour dates and more information on the North Carolina native can be found at www.ScottyMcCreery.com.