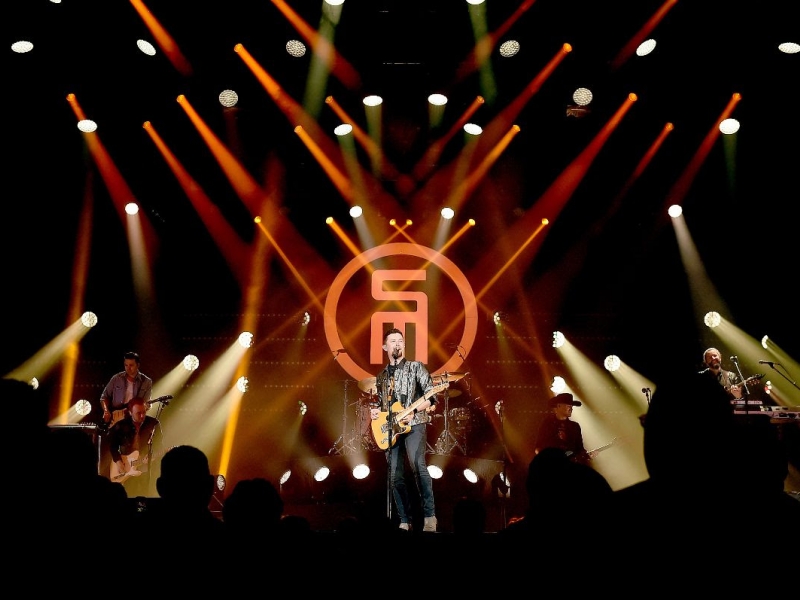 Triple Tigers recording artist Scotty McCreery returned to Nashville’s historic Ryman Auditorium last night, March 11. The sold-out performance marked his first concert appearance at the Mother Church of Country in over six years. Although a native of North Carolina, the evening was a special homecoming of sorts for the singer/songwriter who has seen major changes in his life both personally and professionally since his last show at the famous venue. Not only did he marry his high school sweetheart Gabi but he scored two back-to-back No. 1 hits with the Double Platinum-certified “Five More Minutes” and Platinum-certified “This Is It.” And the career milestones continued Wednesday evening for the country music hitmaker. Prior to taking the Ryman stage at a reception filled with journalists and industry executives, McCreery learned his album Seasons Change had been certified Gold by the RIAA for sales of more than 500,00 units.

“It’s always an honor to perform at the historic Ryman Auditorium,” said McCreery. “I’ve performed here several times on the Grand Ole Opry and have always loved it, but there’s something special about performing your own concert in this place. It’s been six years since I have done my own show here. To come back here now and once again sell it out is a moment I won’t forget.”

McCreery’s career-spanning set pulled from his extensive catalog of music including hits from his most recent album. The ACM and CMT Award winner co-wrote all 11 songs on the Gold-certified Seasons Change, which debuted at No. 1 on the Billboard Top Country Albums Chart upon release. His current single from the album, “In Between,” just entered the Top 20 on the Mediabase/Country Aircheck chart.

“I don’t know where to even begin to say how much Seasons Change means to me or how proud I am of this album. The success of this album changed my life,” said McCreery. “If you listen to all the lyrics, then you should have a strong idea of who I am. It’s that personal. The fact that the fans and country radio loved the music means everything to me. I want to thank Triple 8 Management and Triple Tigers Records for their belief in me and for working with me every step of the way. I want to thank my band and crew for all their hard work through the years. This is a team accomplishment and a true highlight of my career.”

“Scotty’s brand and great songs were the impetus for teaming up with Triple Tigers Records,” said Norbert Nix, GM/Partner, Triple Tigers Records. “Huge chart success and brilliant teamwork provided the opportunity for gold consumption. We are so proud to represent this great artist.”

McCreery triumphantly took the Ryman stage after opening performances from Heather Morgan and Adam Doleac. The crowd responded in kind, often singing along loudly with both his hits and album tracks, while also frequently dancing in the aisles.

In addition to his hits, McCreery debuted two new songs that he recently recorded for his upcoming new album, “Fallin’ For a Stranger” and the emotional “Twice a Child,” which brought the audience to their feet, giving the singer a lengthy standing ovation.  “I can’t think of a better place to give the audience a preview of the new album than on the stage of the Ryman,” said the entertainer, overwhelmed by the reaction of the crowd.

As always, McCreery performed a selection of classic country covers. Last night’s selections included “Hello Darlin’,” “Always and Forever, ““Folsom Prison Blues,” “Chattahoochie,” “SOLD (The Grundy County Auction Incident),” and “If Tomorrow Never Comes” to the delight of the crowd. Performing classic songs has always been a favorite part of the show for the young singer, but it took on even more significance for him to be able to sing them on the stage where his musical heroes once performed them.

To help his second home recover from the devastating tornados in the Nashville area last week, McCreery donated all profits from his merchandise sales at the Ryman to The Community Foundation of Middle Tennessee for its Emergency Response Fund.

After touring with Old Dominion at the end of last year and performing at Luke Bryan’s Crash My Playa event in Cancun, Mexico in January, McCreery joins Chris Young on the road this spring and summer for the “Town Ain’t Big Enough Tour,” beginning April 30 in Columbus Ohio.  In May the multi-Platinum singer/songwriter will return for shows in England and will also perform for the first time in Ireland, Northern Ireland, and Scotland due to strong fan demand.

McCreery recently released his first digital-only EP, The Soundcheck Sessions (listen here), which features acoustic renditions of his hits “Five More Minutes,” “This is It,” “In Between” and the fan-favorite “Still.” Check out the new acoustic video for ‘Five More Minutes” here: https://www.youtube.com/watch?v=QK0QynGn8ds.

About Scotty McCreery
McCreery achieved new heights, earning two back-to-back No. 1 hits from his RIAA Gold-certified album Seasons Change, which debuted at No. 1 on the Billboard Country Album chart: the RIAA Double Platinum-certified “Five More Minutes” and the RIAA Platinum-certified “This is It,” which stayed at the top of the charts for two weeks. His current single is “In Between.” He co-wrote all 11 songs on Seasons Change. All four of his albums have debuted at No. 1 on a Billboard Albums chart, with current combined sales surpassing 3 million copies. He’s earned one Double Platinum, four Platinum and one Gold singles; won the 10th season of “American Idol” in 2011; was named the ACM New Artist of the Year in 2011; won the CMT Music Award for Breakthrough Video of the Year (“The Trouble with Girls”) in 2012; American Country Awards for New Artist of the Year in 2011 and Breakthrough Artist of the Year in 2013; BMI Awards for writing One of the Top 50 Country Songs of the Year three times (in 2015 for “See You Tonight,” in 2018 for “Five More Minutes,” and in 2019 for “This is It”); a Carolina Beach Music Award for National Dance/Shag Song of the Year (“Barefootin’”) in 2018; and the NSAI Nashville Songwriter Award for One of the Top Ten Songs I Wish I’d Written (“Five More Minutes”) in 2018. The North Carolina native released his first book, Go Big or Go Home: The Journey Toward the Dream, in 2016 which was re-released in paperback in 2020. McCreery launched his recording career by making history in 2011 as both the first country artist and the youngest male artist of any genre to debut his first studio album, the Platinum-certified Clear as Day, at No. 1 on the all-genre Billboard Top 200 Albums chart. For more information and his current tour schedule, visit ScottyMcCreery.com.