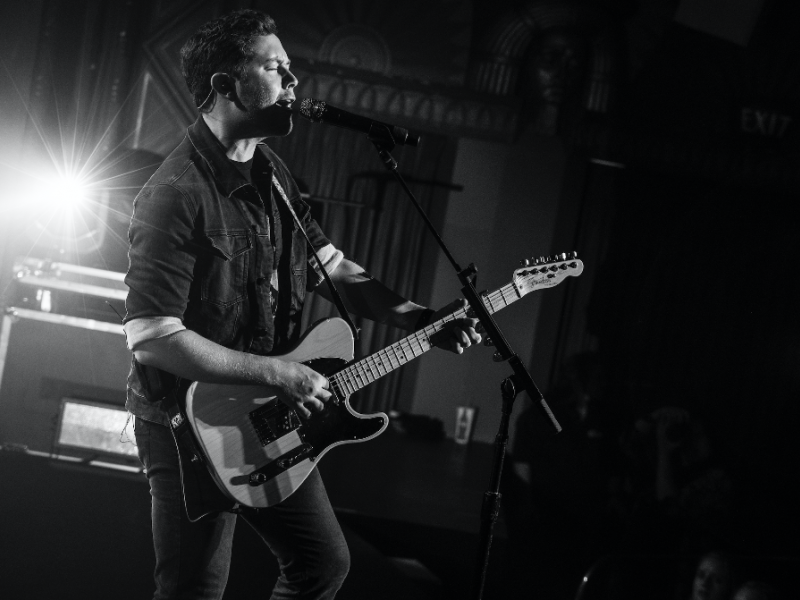 “In Between” was written by McCreery, Frank Rogers, Jessi Alexander, and Jonathan Singleton and produced by Rogers. It is the North Carolina native’s third single from his Seasons Change album on Triple Tigers Records, which debuted at No. 1 on the Billboard Country Albums Chart. Rolling Stone named Seasons Change as one of the “40 Best Country and Americana Albums of 2018” and Whiskey Riff named it as one of the “30 Top Albums of 2018.” Taste of Country said Seasons Change “showcased [McCreery’s] growth as a songwriter and storyteller and his understanding of how and when to share parts of his own story.”

The lyrics of the song define the North Carolina native at his core: “I can see your pretty eyes reading me like a map. Wondering who I am and where I'm at. I'm in between Friday night wild and quiet Sunday morning. Between done after one and keep on pourin’. Ain't too high, ain't too low, just holding down the middle, steady as I go. I ain't all holy water and I ain't all Jim Beam. I'm somewhere in between.”

“One of the things I’ve learned through traveling around the country is that people are a lot more alike than we are different,” said McCreery. “We’re all rarely 100% one thing or the other. We usually are somewhere in between. Using that as the theme, I think this video gives viewers a good idea of what the different aspects of my life are like.”

The “In Between” music video presents all sides of McCreery from high-energy performances on stage, to quiet moments at home with his wife Gabi and yellow Labrador puppy Moose, from late nights drinking with friends, to golfing with his buddies and more. The video also includes never-before-seen footage from the McCreerys’ honeymoon in Bora Bora last year.

“In Between” is currently 46 on Mediabase/Country Aircheck Country Singles chart and 51 on the Billboard Country Airplay charts. McCreery is performing across the country all summer and will tour with Old Dominion in the fall.  Check out his tour dates at ScottyMcCreery.com.

About Scotty McCreery
McCreery achieved new heights this year, earning two back-to-back No. 1 hits from his current album Seasons Change, which debuted at No. 1 on the Billboard Country Album chart: the RIAA Platinum-certified “Five More Minutes” and the RIAA Gold-certified “This is It,” which stayed at the top of the charts for two weeks. He co-wrote all 11 songs on Seasons Change. All four of his albums have debuted at No. 1 on a Billboard Albums chart, with current combined sales surpassing 3 million copies. He’s earned four Platinum and two Gold singles; won the 10th season of “American Idol” in 2011; was named the ACM New Artist of the Year in 2011; won the CMT Music Award for Breakthrough Video of the Year (“The Trouble with Girls”) in 2012; American Country Awards for New Artist of the Year in 2011 and Breakthrough Artist of the Year in 2013; BMI Awards for writing One of the Top 50 Country Songs of the Year twice (in 2015 for “See You Tonight” and in 2018 for “Five More Minutes”); a Carolina Beach Music Award for National Dance/Shag Song of the Year (“Barefootin’”) in 2018; and the NSAI Nashville Songwriter Award for One of the Top Ten Songs I Wish I’d Written (“Five More Minutes”) in 2018. The North Carolina native released his first book, Go Big or Go Home: The Journey Toward the Dream, in 2016. McCreery launched his recording career by making history in 2011 as both the first country artist and the youngest male artist of any genre to debut his first studio album, the Platinum-certified Clear as Day, at No. 1 on the all-genre Billboard Top 200 Albums chart. For more information and his current tour schedule, visit ScottyMcCreery.com.