SCOTTY McCREERY POSTPONES U.K. AND IRELAND CONCERT TOUR FROM MAY TO OCTOBER 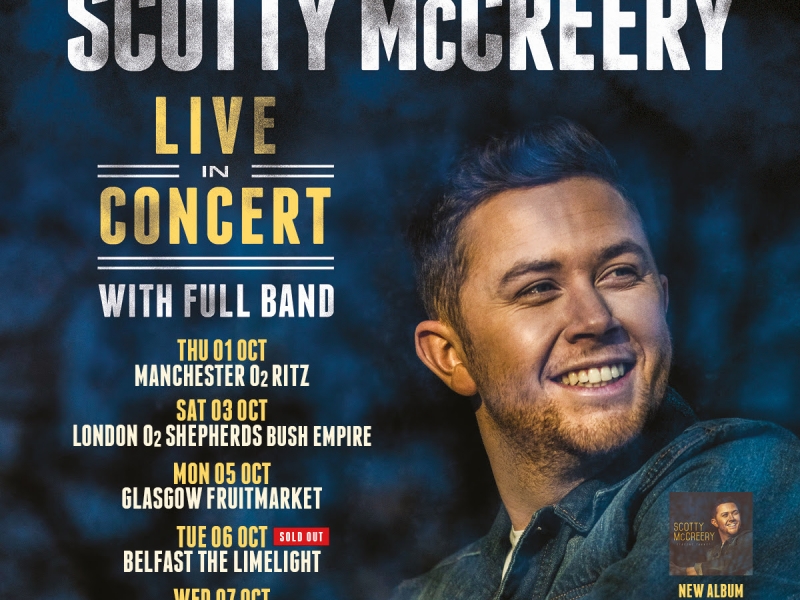 Multi-Platinum country music singer/songwriter Scotty McCreery announced today that, in light of current events and out of an abundance of caution, he will postpone his upcoming May concerts in the U.K. and Ireland and reschedule them for October.

“I’ve really been looking forward to coming over this Spring, but my first priority is the health and safety of my fans, venue owners and staff, and my band and crew,” said McCreery. “It may be a few months later than we had originally planned, but I can’t wait to come over to the U.K. and Ireland in October and see everyone. We will all get through this together.”

All shows except for Bristol, England (originally set for May 19) will be rescheduled to the new dates listed below. Original tickets remain valid.

Unfortunately, the Bristol show could not be rescheduled, so those tickets will be refunded. Ticketholders should contact their point of purchase for refund information.

“I’m so sorry Bristol,” said McCreery. “I am very disappointed that I’m not able to perform in your city on the rescheduled tour. I hope to be there on a future U.K. tour, and I hope some of you are able to come to our London show since it is now on a Saturday.”

The new dates are:

Tickets for the England and Scotland shows can be purchased at http://gigst.rs/ScottyM.

Tickets for the Dublin, Ireland show can be purchased at www.ticketmaster.ie. The Belfast, Northern Ireland show had already sold out, but interested fans should check at this link to learn if any seats become available after the date change.

The ACM and CMT Award-winner is currently in the Top 20 on the Mediabase / Country Aircheck US country airplay chart with his current single “In Between” from the No. 1-debuting album Seasons Change, which was just RIAA-certified Gold for sales of more than 500,000 units and already features two consecutive No. 1 hits:  the RIAA Double Platinum certified “Five More Minutes” and the RIAA Platinum certified “This is It.” After touring with Old Dominion at the end of last year and performing at Luke Bryan’s Crash My Playa event in Cancun, Mexico in January, McCreery will join Chris Young on the road later this summer for the “Town Ain’t Big Enough Tour.” The Triple Tigers/Sony recording artist recently released his first digital-only EP, The Soundcheck Sessions, which features acoustic renditions of his hits “Five More Minutes,” “This is It,” “In Between” and the fan-favorite “Still.”

About Scotty McCreery
McCreery, whose current single is “In Between,” achieved new heights by earning two back-to-back No. 1 hits from his most recent album Seasons Change, the RIAA Gold certified project which debuted at No. 1 on the Billboard Country Album chart: the RIAA Double Platinum-certified “Five More Minutes” and the RIAA Platinum-certified “This is It,” which stayed at the top of the charts for two weeks. He co-wrote all 11 songs on Seasons Change. All four of his albums have debuted at No. 1 on a Billboard Albums chart, with current combined sales surpassing 3 million copies. He’s earned one Double Platinum, four Platinum and one Gold singles; won the 10th season of “American Idol” in 2011; was named the ACM New Artist of the Year in 2011; won the CMT Music Award for Breakthrough Video of the Year (“The Trouble with Girls”) in 2012; American Country Awards for New Artist of the Year in 2011 and Breakthrough Artist of the Year in 2013; BMI Awards for writing One of the Top 50 Country Songs of the Year three times (in 2015 for “See You Tonight,” in 2018 for “Five More Minutes,” and in 2019 for “This is It”); a Carolina Beach Music Award for National Dance/Shag Song of the Year (“Barefootin’”) in 2018; and the NSAI Nashville Songwriter Award for One of the Top Ten Songs I Wish I’d Written (“Five More Minutes”) in 2018. The North Carolina native released his first book, Go Big or Go Home: The Journey Toward the Dream, in 2016; it was recently re-released in paperback in 2020. McCreery launched his recording career by making history in 2011 as both the first country artist and the youngest male artist of any genre to debut his first studio album, the Platinum-certified Clear as Day, at No. 1 on the all-genre Billboard Top 200 Albums chart. For more information and his current tour schedule, visit  ScottyMcCreery.com.