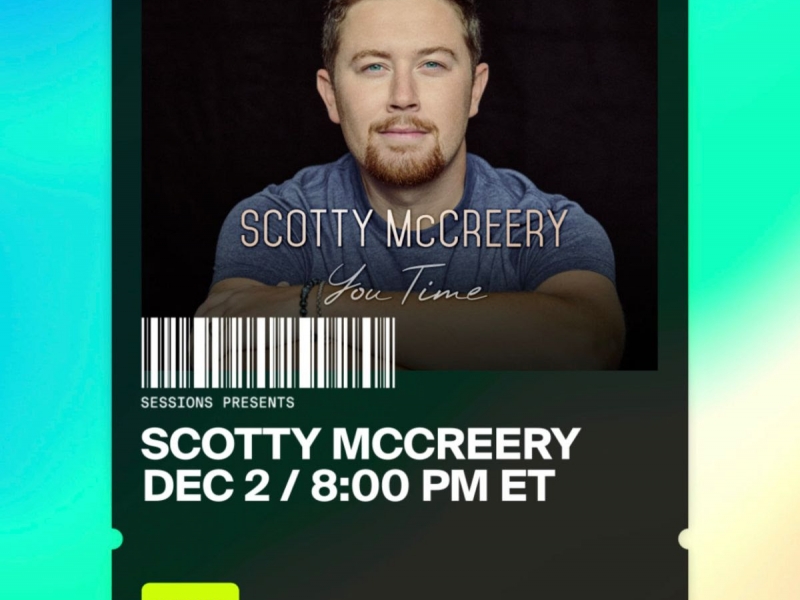 Currently at work on the follow-up to RIAA Gold-Certified Seasons Change and with new single “You Time” poised to debut soon on the charts, Triple Tigers recording artist Scotty McCreery is ready to entertain fans around the globe with the announcement of his exclusive Sessions livestream acoustic concert on Dec. 2 at 8 p.m. ET from Raleigh in his home state of North Carolina. Tickets for the intimate acoustic set are available for purchase HERE.

“I have missed doing live concerts, seeing the fans, and spending time with my band and crew during this crazy year, so this acoustic concert with Sessions is a great way to keep us connected,” said McCreery. “I’m excited to have my guitarists Jeff and Dylan join me for this event. The three of us have not done an acoustic livestream together this year, so this show will be unique and will feature my new song ‘You Time’ as well as the hits, some Christmas classics, and more.”

General admission for the livestream begins at $5, with After Party and You Time VIP packages available. The After Party package is limited to 450 fans and features a moderated Q&A with the opportunity to hear McCreery perform additional songs for $20, while the You Time VIP After Party package also includes a virtual meet and greet, where fans can briefly chat with McCreery and receive a screenshot of their time together, limited to 30 fans, and priced at $50.

Sessions is a new livestreaming platform, co-founded by former Pandora founder Tim Westergren and fellow entrepreneur and long-time developer of virtual games Gordon Su, which aims to increase an artists’ reach with promotion and marketing support rather than just providing a medium for delivering livestream content.

Earlier this year, McCreery was the first act to welcome the return of live concertgoers to the Ryman Auditorium, where he gave the debut performance of latest single “You Time” to both a national livestream pay-per-view audience as well as a sold-out limited in-venue audience of fans in the ‘LIVE AT THE RYMAN’ series. This was a full-circle moment as McCreery’s sold-out performance in March of this year marked the last show by a single artist act to take place prior to the Ryman’s temporary suspension of operations. Since that mid-March show, the multi-Platinum-selling artist has given more than 100 livestream performances as part of what he calls his Somewhere in Quarantine Tour, reaching tens of thousands of online viewers with each individual event.

Written by McCreery, Frank Rogers and Aaron Eshuis, and produced by Rogers, Eshuis and Derek Wells, “You Time” has garnered nearly 3 million streams since its release in September, with Billboard noting, “the first single from his forthcoming album bodes well for his streak of three back-to-back No. 1’s to continue,” while MusicRow  proclaimed of McCreery, “as always, he’s a country beacon,” and of the track “upbeat and romantic, this has a lot going for it.”

About Sessions
Sessions is creating a space to bring artists and fans together for intimate live experiences. Available online and on all mobile devices worldwide, artists and fans can play more, earn more, experience more in Sessions.