SCOTTY McCREERY CELEBRATES SUCCESS OF NO. 1 SINGLE “THIS IS IT” 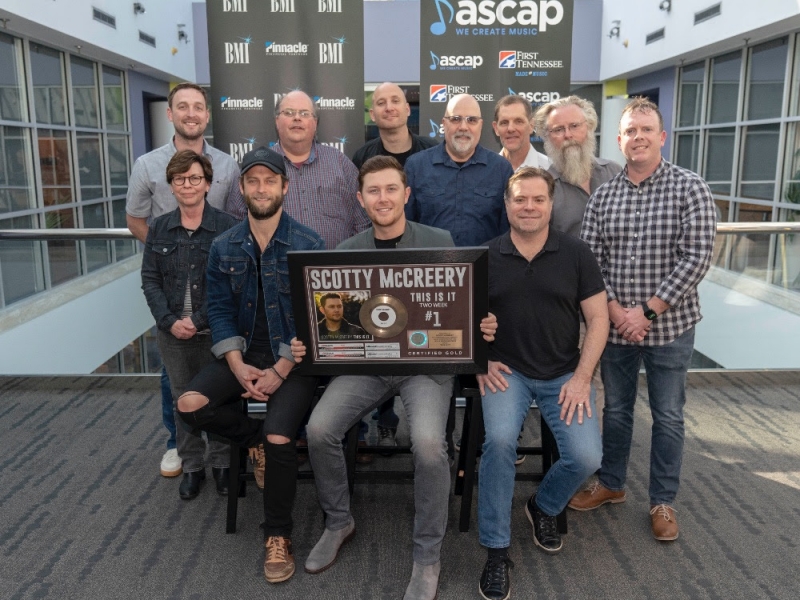 Thursday, March 21, 2019 - 3:00pm
Related Client:
Scotty McCreery
Last night Triple Tigers recording artist Scotty McCreery celebrated his chart topping single, “This Is It,” in Nashville with friends, family, colleagues and media in attendance at an industry celebration hosted by ASCAP and BMI. "This Is It" is McCreery's second ever No. 1 and second consecutive No. 1 hit off his Seasons Change album. He was joined by fellow song co-writers (and two of the three album co-producers) Frank Rogers and Aaron Eshuis at the event where the North Carolina native received a plaque to signify the song's two weeks at No. 1 as well as RIAA Gold Certification.

"If you had told me a couple years ago we'd be here, I'd have told you, you were crazy. It has been an incredible feeling and an incredible ride," shared McCreery who went on to thank wife Gabi who served as the inspiration for the hit song.

"It is easy to write love songs about you baby...appreciate you marrying me and saying yes, otherwise this song might not have made it on the radio," the singer/songwriter quipped. "'This is not it' is not a great title."

"This Is It" is the second single from McCreery’s 2018 album, Seasons Change, which debuted at No. 1 on the Billboard Country Albums Chart. McCreery, who married longtime love Gabi in June 2018, wrote the song specifically about his heartfelt proposal. Footage from their wedding can be seen in the single’s music video which took the number one spot on this week’s "CMT Hot 20 Countdown" ahead of last night's celebration. Their wedding was spotlighted in both People and The Knot, with the couple also featured on the cover of Southern Bride. "This Is It" follows McCreery’s deeply reflective and acclaimed "Five More Minutes," which reached the No. 1 spot last February just ahead of the album’s release and is nearing double-Platinum status.

"This is It" is also the first No. 1 song for Eshuis as both a songwriter and producer. It is the first No.1 song for Derek Wells as producer and his 50th No. 1 song as a musician. Wells was in Canada working on a project and not able to be present, but multi-No.1 hit songwriter and producer Rogers called him from stage, put him on speaker, and had the crowd congratulate him on his accomplishment so he could share in the day.

Fans can still catch McCreery on the road all year. Visit www.ScottyMcCreery.com for tour dates. "In Between," the third single from Seasons Change, impacts country radio on April 1.
About Scotty McCreery
McCreery achieved new heights this year, earning two back-to-back No. 1 hits from his current album Seasons Change, which debuted at No. 1 on the Billboard Country Album chart: the RIAA Platinum-certified "Five More Minutes" and the RIAA Gold-certified "This is It," which stayed at the top of the charts for two weeks. He co-wrote all 11 songs on Seasons Change. All four of his albums have debuted at No. 1 on a Billboard Albums chart, with current combined sales surpassing 3 million copies. He’s earned four Platinum and two Gold singles; won the 10th season of "American Idol" in 2011; was named the ACM New Artist of the Year in 2011; won the CMT Music Award for Breakthrough Video of the Year ("The Trouble with Girls") in 2012; American Country Awards for New Artist of the Year in 2011 and Breakthrough Artist of the Year in 2013; BMI Awards for writing One of the Top 50 Country Songs of the Year twice (in 2015 for "See You Tonight" and in 2018 for "Five More Minutes"); a Carolina Beach Music Award for National Dance/Shag Song of the Year ("Barefootin'") in 2018; and the NSAI Nashville Songwriter Award for One of the Top Ten Songs I Wish I’d Written ("Five More Minutes") in 2018. The North Carolina native released his first book, Go Big or Go Home: The Journey Toward the Dream, in 2016. McCreery launched his recording career by making history in 2011 as both the first country artist and the youngest male artist of any genre to debut his first studio album, the Platinum-certified Clear as Day, at No. 1 on the all-genre Billboard Top 200 Albums chart. For more information and his current tour schedule, visit www.ScottyMcCreery.com.