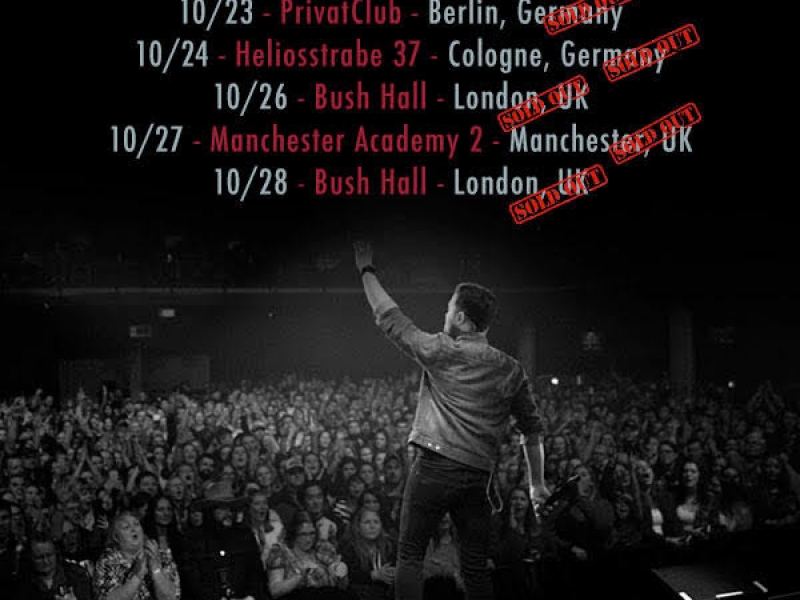 German and English audiences fell in love with the ACM, BMI, CMT and NSAI Award-winning Scotty McCreery this past week as the Triple Tigers/Sony recording artist performed in both countries for the first time, selling-out all five shows on his first-ever European tour with Six Shooter Country calling McCreery’s London show “music heaven.” The dates coincided with Country Music Week in both countries.

“This was an incredible week,” said an exuberant McCreery. “The audiences have been amazing. They knew the words to every song – not just the hits, but all the album tracks. As a songwriter, hearing an audience in another country across the ocean sing ‘Five More Minutes’ back to me is such an emotional experience. I can’t wait to come back to England and Germany, and also perform in other counties in the UK and Europe as well.  We will be back!”

“McCreery made it worth the wait for UK fans with one of the standout performances of Country Music Week...,” Entertainment-Focus said of the North Carolina native’s first London show. “He delivered a high-energy, fun and entertaining show with plenty of personality, excellent vocals and warm, easy-going stage presence, all adding up to create an absolutely electric atmosphere at Bush Hall. It’s clear that the UK audiences absolutely love him and based on their response last night hopefully it won’t be too long before he’s back here – and playing to even bigger venues…”

The five sold out shows on McCreery’s European Tour were as follows:

“It was an absolute pleasure and honor to have Scotty McCreery and his team in Germany for our first Country Music Week,” said Sina Hall, Promoter, Semmel Concerts / Sound of Nashville. “They delivered two amazing sold-out shows with a dedicated audience that sang along to every word. We’re very much looking forward to working together more in the near future and build on this success.”

The first London show (Oct. 26) sold out in just over an hour when tickets originally went on sale, so a second show was quickly announced (Oct. 28) and it sold out in less than four hours. Due to demand, the Manchester show (10/27), which sold out within hours after going on sale, was upgraded into the larger Manchester Academy 2 venue, which also sold out.

“It was a delight to bring Scotty to the UK for the first time as part of Country Music Week,” said Alex Simmonds, Promoter, SJM Concerts. “Watching him perform such an intimate show at Bush Hall was electric. For the fans who were quick enough to grab a ticket to all three shows before they sold out, it will be a night I’m sure they won’t soon forget. We can’t wait to bring Scotty back to the UK in bigger venues and to more cities.”

McCreery will hit the road in the United States with Old Dominion on Nov. 1 in Tampa, kicking off a series of dates as part of the band’s “Make It Sweet” Tour. He will host the iHeartCountry “One Night for Our Military” Veteran’s Day radio special, airing on iHeartCountry radio stations on Nov. 11, where he will also perform along with artists Jason Aldean and Kelsea Ballerini. In December, the singer/songwriter will begin work on his next album, the follow up to Seasons Change, which debuted at No. 1 on the Billboard Top Country Albums Chart and featured two back-to-back No. 1 hits: the Platinum-certified “Five More Minutes” and the Platinum-certified “This is It,” as well as his current single “In Between,” which is climbing the country single charts.

About Scotty McCreery
McCreery achieved new heights this year, earning two back-to-back No. 1 hits from his current album Seasons Change, which debuted at No. 1 on the Billboard Country Album chart: the RIAA Platinum-certified “Five More Minutes” and the RIAA Platinum-certified “This is It,” which stayed at the top of the charts for two weeks. He co-wrote all 11 songs on Seasons Change. All four of his albums have debuted at No. 1 on a Billboard Albums chart, with current combined sales surpassing 3 million copies. He’s earned five Platinum and one Gold singles; won the 10th season of “American Idol” in 2011; was named the ACM New Artist of the Year in 2011; won the CMT Music Award for Breakthrough Video of the Year (“The Trouble with Girls”) in 2012; American Country Awards for New Artist of the Year in 2011 and Breakthrough Artist of the Year in 2013; BMI Awards for writing One of the Top 50 Country Songs of the Year twice (in 2015 for “See You Tonight” and in 2018 for “Five More Minutes”); a Carolina Beach Music Award for National Dance/Shag Song of the Year (“Barefootin’”) in 2018; and the NSAI Nashville Songwriter Award for One of the Top Ten Songs I Wish I’d Written (“Five More Minutes”) in 2018. The North Carolina native released his first book, Go Big or Go Home: The Journey Toward the Dream, in 2016. McCreery launched his recording career by making history in 2011 as both the first country artist and the youngest male artist of any genre to debut his first studio album, the Platinum-certified Clear as Day, at No. 1 on the all-genre Billboard Top 200 Albums chart. For more information and his current tour schedule, visit  ScottyMcCreery.com.