SCOTTY McCREERY CELEBRATES NO. 1 SINGLES “DAMN STRAIT,” “YOU TIME” AND “IN BETWEEN” 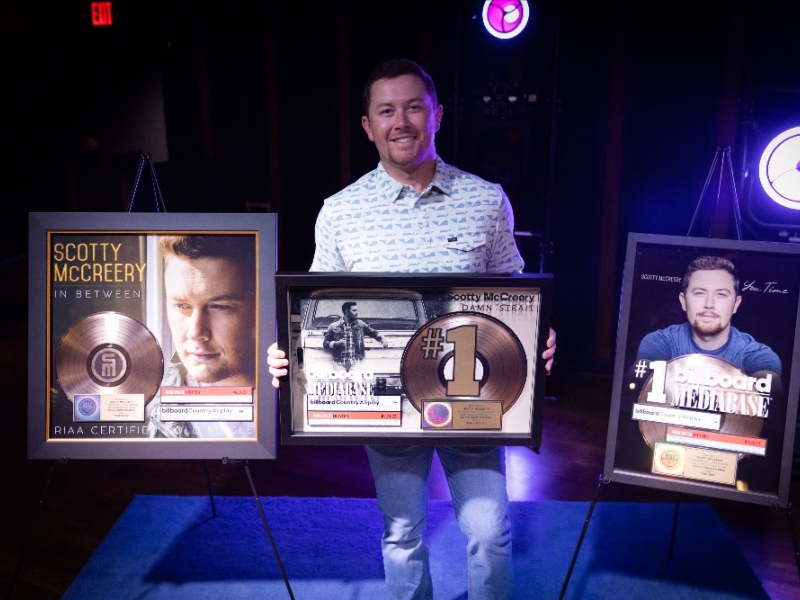 NASHVILLE, Tenn. – On the heels of three straight weeks at No. 1 on the Billboard Country Airplay chart with his hit song “Damn Strait,” Triple Tigers recording artist Scotty McCreery, celebrated that track along with his two previous No. 1s “You Time” and “In Between.” In addition to being recognized for the number one tracks, McCreery also received plaques to signify GOLD Certification by the RIAA for each single as well and a Music Row Gold Coin  “Damn Strait” to No.1 on the Music Row Country Radio Breakout Chart.

“With Covid and not being able to gather during the last couple years, we had some lost celebrations to make up for,” shared McCreery. “I never take a number one for granted…it takes a village and every one feels like the first. I was so happy to finally be able to raise a glass with the team and the songwriters to say thanks for all the hard work.”

“All three of these songs deserved their own huge No. 1 party,” said Kevin Herring, SVP of Promotion for Triple Tigers Records. “The dedication of so many great people have culminated in achieving the chart pinnacle for all three of these songs. Nobody has worked harder or deserves more credit than Scotty, and it sure is fun to all celebrate our victories together.”

The celebration follows last week’s announcement that the North Carolina native had partnered with Dr Pepper to give fans the chance to win “The Flyaway Experience You Deserve.” The grand prize includes travel, meet and greet, and tickets to one of McCreery’s shows later this year. Fans can visit DrPepperMusic.com/Scotty-McCreery to sign up for a chance to win, get more information and learn more about McCreery.

McCreery’s Dr Pepper promotion kicked off on Aug. 1, via social media and centers around the his hist, “You Time,” which the singer wrote with Frank Rogers and Aaron Eshuis. McCreery will also be featured as part of Dr Pepper’s in-store display marketing materials in major grocery chains throughout select markets including Albertsons, Food City, Harris Teeter, Kroger, Piggly Wiggly, Walmart, Winn Dixie, and more throughout August.

“Damn Strait” is McCreery’s fifth consecutive No.1 hit, following “You Time,” “In Between,” “This is It,” and “Five More Minutes.” Upon the song’s release, Rolling Stone named it a “Pick of the Week” calling it “clever songwriting, delivered by one of the genres’ best King George disciples,” while Billboard praises, “Another ace is the clever track ‘Damn Strait,’ a rare outside cut on the project, penned by Trent Tomlinson and Jim Collins, in which McCreery name checks several of King George's greatest hits.” Taste of Country recently named it “one of the top 10 country songs of 2022 so far.”

Both “Damn Strait” and “You Time” are featured on his current album, Same Truck, produced by Frank Rogers, Derek Wells, and Aaron Eshuis. Released in late 2021, the Garner, North Carolina native shifted his perspective to reflect on the last decade of his career and life with wife Gabi and dog Moose, with Tennessean sharing, “McCreery walks a sonic tightrope that leans into his country influences while not abandoning modern Music Row hitmaking,” while Sounds Like Nashville observes, “with 12 tracks in total, those songs ended up showing more maturity than ever, and exploring everything from the common bonds his fans share to the eternal flame of romance.”