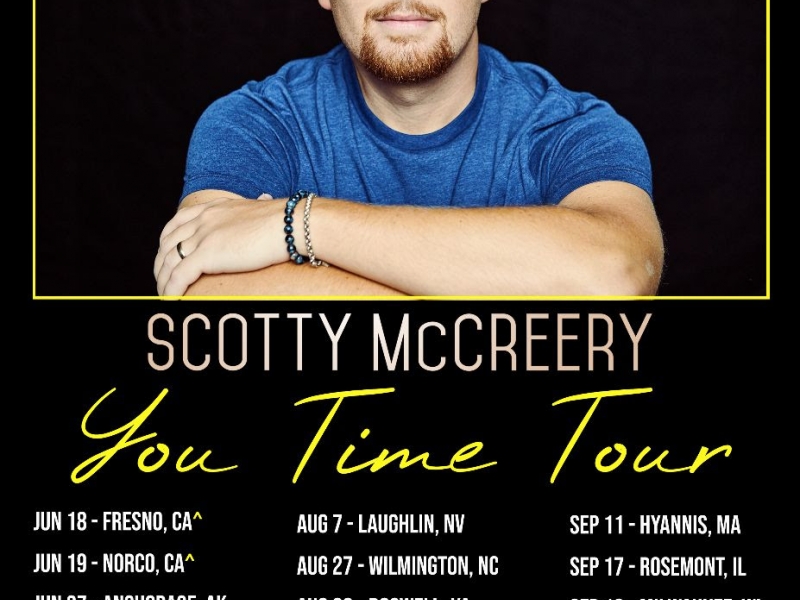 Delivering more than 130 online performances for fans, Country radio, charitable events, and media outlets, Scotty McCreery had one thought in the back of his mind this last year: readying new music for fans when he could again return to the road. Between his livestream concert on Sept. 4, 2020, “Live from the Ryman,” with his full band being the first to welcome any audience back into the Ryman (limited capacity) and their Dec. 2, 2020 stripped-acoustic livestream from Raleigh’s Lincoln Theatre, McCreery has been thinking a lot about what his show will look and feel like when in-person again and especially what he wants to say. That time is upon him with the launch of his You Time Tour in June.

“This last year I was glad to get more ‘you time’ with my wife Gabi than ever before, as well as a lot of ‘you time’ with some of my favorite songwriters via zoom as we created new songs for the upcoming album,” reflects McCreery who has been in the studio this year with producers Aaron Eshuis, Frank Rogers and Derek Wells. “And now that we’re able to tour again, I cannot wait to get back on the road and have some ‘you time’ with fans this summer. This song’s message and timing really hit home for me and I hope we keep a few things like the intention of the time we spent with others this last year as we look ahead. I, for one, will never take going to a show or playing music live for fans for granted after this last year without it.”

The North Carolina native released “You Time” last September as the first single from his upcoming new album which he plans to put out in the Fall. Written by McCreery, Rogers and Eshuis, the song is rising steadily, currently sitting at No. 23 on the Mediabase/Country Aircheck Country Singles Chart.

“I’m excited to reunite with Old Dominion for their Live from the Ballpark Tour,” said McCreery, who last toured with the band in 2019. “These guys are not only amazing performers but great people, and this tour will be a blast. Plus, having been a pitcher on my high school baseball team, performing in these ball parks will be like coming home.”

About Scotty McCreery
McCreery achieved new heights by earning three back-to-back No. 1 hits from his most recent album Seasons Change, the RIAA Gold-certified project which debuted at No. 1 on the Billboard Country Album chart: the RIAA Double Platinum-certified “Five More Minutes,” the RIAA Platinum-certified “This Is It,” which stayed at the top of the charts for two weeks, and RIAA Gold-certified “In Between.” He co-wrote all 11 songs on Seasons Change. His current single “You Time” from the forthcoming follow-up to Seasons Change is available everywhere now. All four of his albums have debuted at No. 1 on a Billboard Albums chart, with current combined sales surpassing 3 million copies. He’s earned one Double Platinum, four Platinum and two Gold singles; won the 10th season of “American Idol” in 2011; was named the ACM New Artist of the Year in 2011; won the CMT Music Award for Breakthrough Video of the Year (“The Trouble with Girls”) in 2012; American Country Awards for New Artist of the Year in 2011 and Breakthrough Artist of the Year in 2013; BMI Awards for writing One of the Top 50 Country Songs of the Year three times (in 2015 for “See You Tonight,” in 2018 for “Five More Minutes,” and in 2019 for “This is It”); a Carolina Beach Music Award for National Dance/Shag Song of the Year (“Barefootin’”) in 2018; and the NSAI Nashville Songwriter Award for One of the Top Ten Songs I Wish I’d Written (“Five More Minutes”) in 2018. The North Carolina native released his first book, Go Big or Go Home: The Journey Toward the Dream, in 2016; it was recently re-released in paperback in 2020. McCreery launched his recording career by making history in 2011 as both the first country artist and the youngest male artist of any genre to debut his first studio album, the Platinum-certified Clear as Day, at No. 1 on the all-genre Billboard Top 200 Albums chart. For more information, visit  ScottyMcCreery.com.