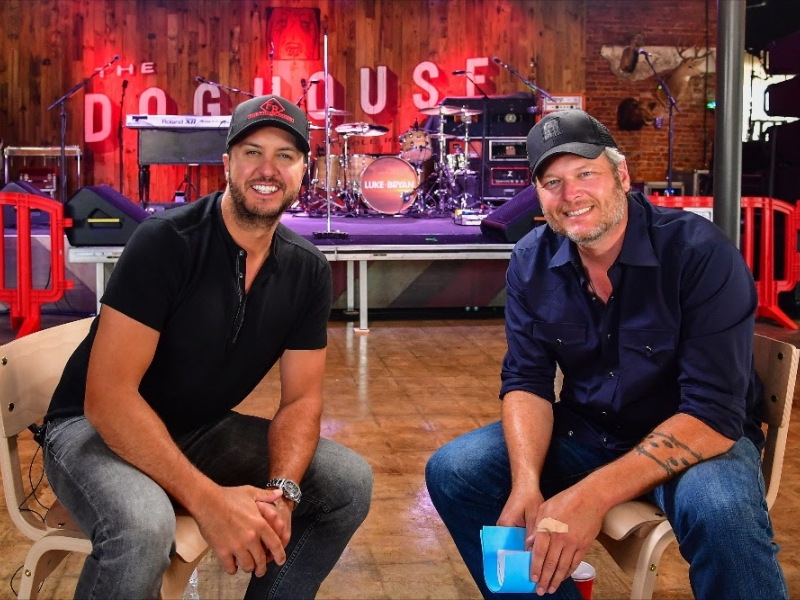 Ryman Hospitality Properties (RHP) and Blake Shelton celebrated the grand opening of The Doghouse at Ole Red Tishomingo, a music hall and events venue expansion to the Shelton-inspired bar and restaurant located in downtown Tishomingo, with special performances by country music mega-stars Luke Bryan on Thursday, May 23 and Shelton on Friday, May 24.

Festivities kicked off Thursday evening with Shelton welcoming Bryan to officially christen the new venue. He delivered a 90+ minute set that included a breadth of songs from his extensive catalog of hits with Bryan noting to the packed crowd, “this is the one time it is good to be in the ‘Doghouse.’ He delivered a spirited performance that included current single “Knockin’ Boots” as well as fan favorites “Country Girl (Shake It For Me),” “That’s My Kind of Night,” “Strip It Down” and many more.

An enthusiastic Strong shared with Oklahoma’s NBC affiliate KTEN last week, “Not only is it awesome that Blake Shelton has decided to be a founding member of this foundation but to donate the proceeds from these concerts for the grand opening of the Doghouse is just icing on the cake.”

“I was born and raised in Oklahoma. I like to hunt and fish, but even if you don’t hunt or fish, the outdoors I swear… in Oklahoma…it's heaven,” shared Shelton. “And the money we raised at the Doghouse grand opening will help make sure everyone can enjoy it.”

Following Friday’s check presentation, the festivities continued with hometown hero Shelton taking the stage to perform some of his biggest hits including “Austin,” “Honey Bee” and “Boys Round Here.” Over the course of the rowdy and energetic 2+ hour set, Shelton was also joined on stage by Andrew Sevener, season 16 contestant from NBC’s “The Voice” and Team Blake member.

Grand opening celebrations for The Doghouse continue with a weekend of unforgettable entertainment.

The Doghouse at Ole Red Tishomingo’s weekly programming will include “Thursday Night Jams,” “Live in Concert” on Friday nights, the “Shindig,” weekly dance party on Saturday nights, and more to be announced throughout the year. The space will also be available for private events beginning in June. For venue hours, private event information, programming and upcoming special events, visit olered.com/doghouse.

About Luke Bryan
Luke is a two-time Academy of Country Music and a two-time Country Music Association Entertainer of the Year, a five-time host of the ACM Awards, a NSAI Artist/Songwriter of the Year and was named a CMT Artist of the Year six consecutive years. Luke has more certified digital singles than any other country artist with 46 million tracks and 12 million albums with four Billion music streams. Luke has placed 22 singles at #1, 12 of which he co-wrote. Over the last few years, Luke’s headline tours have performed for 1.5 million fans or more and in 2018 he performed more stadium dates in one calendar year than ever with a career total of 34. On May 31, Luke will launch the “Sunset Repeat Tour” with special guests Cole Swindell and Jon Langston.

A member of the Grand Ole Opry, the Platinum-selling entertainer has earned a host of honors throughout his career including 20 ACM nominations and both the male and overall Video of the Year trophies at the 2018 CMT Awards. As a coach for the Emmy Award-winning television show The Voice, Shelton is a six-time champion, most recently with his contestant Chloe Kohanski. He lends his “voice” to the character Ox, the unofficial Mayor of Uglytown in the upcoming UglyDolls movie. The animated feature will be released May 3. Off stage, he has teamed up with Ryman Hospitality to open a string of Ole Red entertainment restaurant venues, a nod to his 2001 hit of the same name, in his Oklahoma hometown of Tishomingo as well as Nashville and most recently in Gatlinburg, TN.