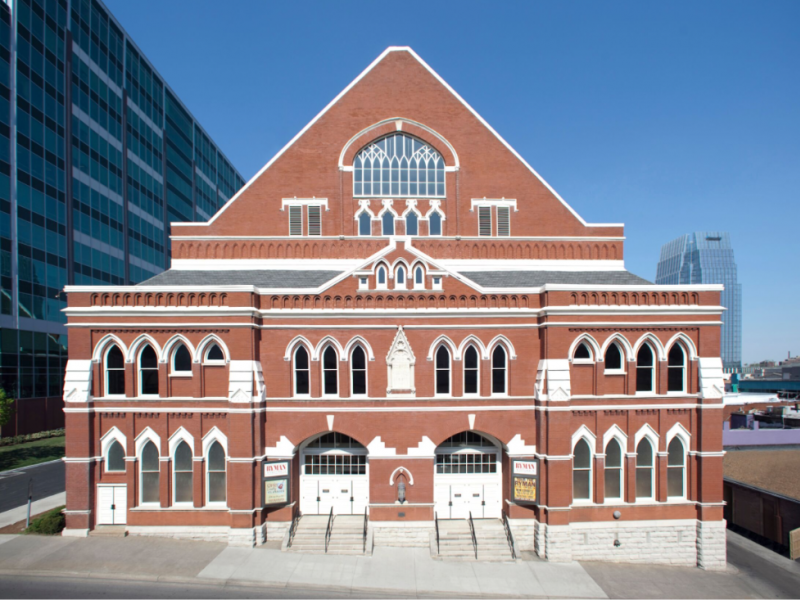 On Sunday, April 14, Tennessee residents are invited to experience the historic Ryman Auditorium’s daytime tour experience free of charge as part of a Community Appreciation Day sponsored by partners Nissan and SunTrust Bank. Complimentary self-guided tours will be available from 10:00 a.m. – 3:00 p.m. with presentation of a valid Tennessee state ID at the Ryman box office. No reservations are necessary.

The Ryman’s self-guided tour includes admission to the state-of-the-art theater experience, “Soul of Nashville.” The film puts the audience at the center of the Ryman’s fascinating history as more than a century of iconic performances come to life on all sides of the room.  The dramatic story of the building’s near demolition and rebirth climaxes with a new collaboration featuring Darius Rucker, The Fisk Jubilee Singers, Sheryl Crow and Vince Gill. Once “Soul of Nashville” has provided an introduction to the Ryman story, visitors can explore the auditorium and enjoy daytime exhibits: “Workin’ on a Building,” “Showplace of the South,” “Mother Church of Country Music,” “Roots Run Deep” and “Ryman Renaissance.”  Guests will see genuine artifacts and enjoy videos with hosts Emmylou Harris, Nicole Kidman, Keb’ Mo’, Ricky Skaggs, Marty Stuart, Robin Roberts and Trisha Yearwood taking them through each chapter of the Ryman’s illustrious history.  Fans will also be able to jump on stage and have their picture made where so many legends have stood before them.  Photos will be available for $5.00.

In addition to sponsoring the complimentary tours for Tennessee residents, Nissan and Suntrust Bank have partnered with 650 AM WSM to provide free live music throughout the day on the Ryman plaza outside Cafe Lula. Bands scheduled to play include The Camonas, Fifty Shades of Hay and Emily Minor.  Visitors are encouraged to stay throughout the day and enjoy lunch at Cafe Lula.  The cafe is open daily from 10:30 a.m. to 5:00 p.m. with extended hours during evening events.

About Ryman Auditorium
A National Historic Landmark, Ryman Auditorium was built as a tabernacle by Captain Thomas G. Ryman in 1892, served as the home of the Grand Ole Opry from 1943-74 and was completely renovated in 1994. The Ryman is open for tours during the day and at night offers a wide variety of entertainment performances, just as it has for over 125 years. The venue was voted the 2003, 2004, 2010, 2011, 2012, 2013, 2014, 2015, 2016, 2017 and 2018 Pollstar Theatre of the Year and recently took home its sixth consecutive CMA Venue of the Year Award. Ryman Auditorium is owned by Ryman Hospitality Properties, Inc. (NYSE: RHP), a Nashville-based REIT that also owns and operates the Grand Ole Opry, Ole Red and 650 AM WSM. For more information, visit ryman.com.About Nissan North America
In North America, Nissan's operations include automotive styling, engineering, consumer and corporate financing, sales and marketing, distribution and manufacturing. Nissan is dedicated to improving the environment under the Nissan Green Program and has been recognized annually by the U.S. Environmental Protection Agency as an ENERGY STAR® Partner of the Year since 2010. More information on Nissan in North America and the complete line of Nissan and INFINITI vehicles can be found online at www.nissanusa.com and www.infinitiusa.com, or visit the U.S. media sites nissannews.com and infinitinews.com.
SunTrust Banks, Inc.
(NYSE: STI) is a purpose-driven company dedicated to Lighting the Way to Financial Well-Being for the people, businesses, and communities it serves. SunTrust leads onUp, a national movement inspiring Americans to build financial confidence. Headquartered in Atlanta, the Company has two business segments: Consumer and Wholesale. Its flagship subsidiary, SunTrust Bank, operates an extensive branch and ATM network throughout the high-growth Southeast and Mid-Atlantic states, along with 24-hour digital access. Certain business lines serve consumer, commercial, corporate, and institutional clients nationally. As of December 31, 2018, SunTrust had total assets of $216 billion and total deposits of $163 billion. The Company provides deposit, credit, trust, investment, mortgage, asset management, securities brokerage, and capital market services. Learn more at suntrust.com.