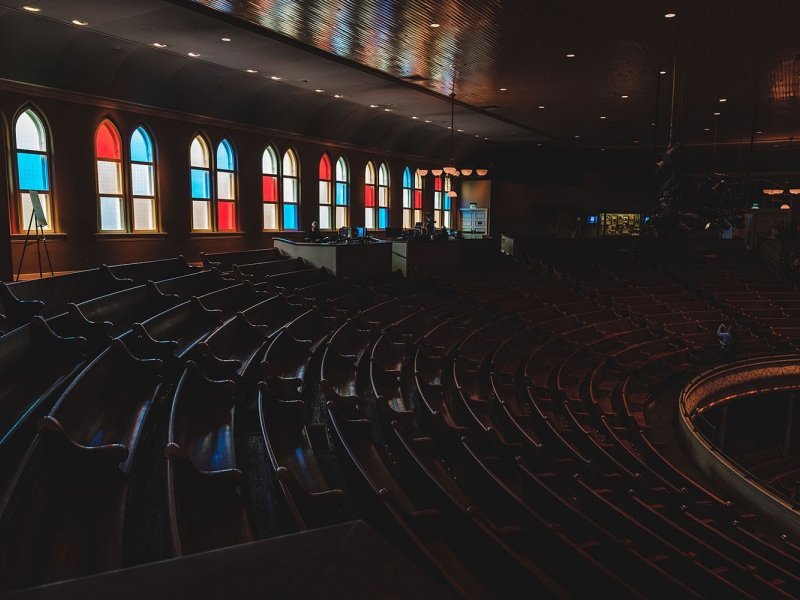 Nashville’s Ryman Auditorium is continually recognized as one of the greatest and most treasured performance halls in the world. Last night, the Ryman was named Theatre of the Year for the ninth consecutive year, and her 11th lifetime win, at the 30th Annual Pollstar Awards in Los Angeles.

Named one of the “10 Best Live Music Venues in America” by Rolling Stone magazine last year, the Ryman (2,362 capacity) was first recognized by Pollstar in 2003 as Theatre of the Year and again in 2004. Other accolades include Venue of the Year nods from both the Academy of Country Music and the International Entertainment Buyers Association, and Venue of the Year presented by the Country Music Association, which the renowned music hall recently received for the sixth consecutive time.

Known as the “Mother Church of Country Music,” Ryman Auditorium is holy ground for a number of music’s greats. A bucket list venue for many, her stage has seen the likes of Brandi Carlile, Bruce Springsteen, Foo Fighters, Garth Brooks, Harry Styles, Jason Isbell, Johnny Cash, Kacey Musgraves, Little Big Town and Patsy Cline, to name a few. The Ryman is known around the globe equally for its world-class acoustics and history-making contributions to the live music industry.

The venue continues to host a wide variety of concerts, comedy shows and performances, proving time and again that longstanding traditions and unmatched reputation do not disappoint.

About Ryman Auditorium
A National Historic Landmark, Ryman Auditorium was built as a tabernacle by Captain Thomas G. Ryman in 1892, served as the home of the Grand Ole Opry from 1943-74, and was completely renovated in 1994. The Ryman is open for tours during the day and at night offers a wide variety of entertainment performances, just has it has for over 125 years. The venue was voted the 2010, 2011, 2012, 2013, 2014, 2015, 2016, 2017 and 2018 Pollstar Theatre of the Year and recently took home its sixth consecutive CMA Venue of the Year Award. Ryman Auditorium is owned by Ryman Hospitality Properties, Inc. (NYSE: RHP), a Nashville-based REIT that also owns and operates the Grand Ole Opry, Ole Red and 650 AM WSM. For more information, visit ryman.com.
###