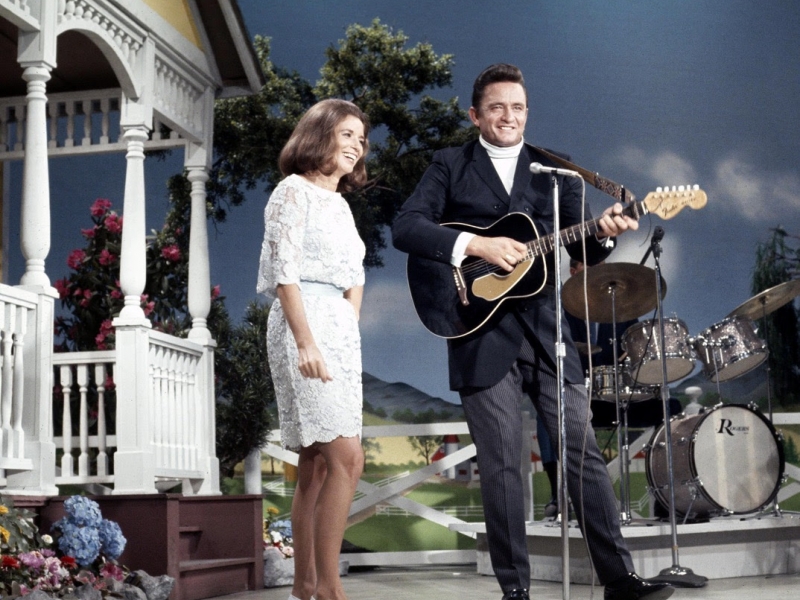 NASHVILLE, Tenn. – It was backstage at the Mother Church that one of Country Music’s most celebrated love stories began. On the night of Johnny Cash’s Grand Ole Opry debut on July 7, 1956, a 27-year-old June Carter bumped into a 24-year-old Johnny Cash backstage at Ryman Auditorium. A smitten Cash reportedly told Carter that night he knew he was going to marry her someday. The two would go on to marry and continue to perform at the Ryman throughout their careers.

The Ryman is celebrating the 65th anniversary of that historic night with a special pop-up exhibit featuring artifacts from both the Ryman and Johnny Cash Museum collections. Items on display include a black Oscar Schmidt autoharp, owned by Maybelle Carter in the 1960s and later played by Carter Cash during live performances. Rounding out the exhibit, the Cash Museum has loaned a dress worn by Carter Cash from their collection in addition to a suit worn by Cash.

“We are so thrilled to team up with our local partners at the Johnny Cash Museum to celebrate one of Country Music’s most iconic love stories,” said Gary Levy, Ryman Auditorium General Manager. “Johnny and June have such a strong connection to the Ryman, and we are excited to share these beautiful artifacts alongside the Johnny Cash Museum, which has the most comprehensive collection of Johnny Cash artifacts and memorabilia in the world.”

“It's an honor to be involved in this celebratory exhibit at the legendary Ryman Auditorium,” said Bill Miller, Founder/CEO of the Johnny Cash Museum. “Johnny and June, individually and collectively, spent many, many hours in that beautiful building. It's very gratifying that their presence will be felt there again through this special exhibit.”

About Ryman Auditorium
A National Historic Landmark, Ryman Auditorium was built by Captain Thomas G. Ryman in 1892. Ryman Auditorium is a 12-time winner of the prestigious Pollstar Theatre of the Year award. The historic venue is well-known as the Mother Church of Country Music and is the most famous former home of Grand Ole Opry (1943-1974). The Ryman has been featured in numerous film and television projects including Coal Miner’s Daughter, The Johnny Cash Show, American Idol, Nashville, and more. While offering a diverse lineup and thriving concert schedule (with over 200 shows per year), the venue is also open for daytime tours year-round. A coveted underplay for many, her iconic stage has seen the likes of Bruce Springsteen, Mumford and Sons, and Tom Petty in recent years. Ryman Auditorium is owned by Ryman Hospitality Properties, Inc. (NYSE: RHP), a Nashville-based REIT that also owns and operates the Grand Ole Opry, 650 AM WSM and Ole Red. For more information, visit www.ryman.com.

About Johnny Cash Museum
Located in the heart of downtown Nashville (119 Third Ave. S), the Johnny Cash Museum is dedicated to the life and music career of the late “Man in Black." Exhibits featuring the world’s largest, most comprehensive collection of Johnny Cash artifacts and memorabilia, chronicle Cash’s legacy through stunning graphics, artifacts and interactive technology. Items include stage costumes, instruments, personal letters, artwork and handwritten lyrics as well as contributions from family members and notable friends. The Johnny Cash Museum has earned the AAA Gem rating and has been lauded by many outlets including TripAdvisor, Marie Claire, Orbitz, USA Today, Conde Nast's Traveler, National Geographic, Forbes and more as a top attraction.