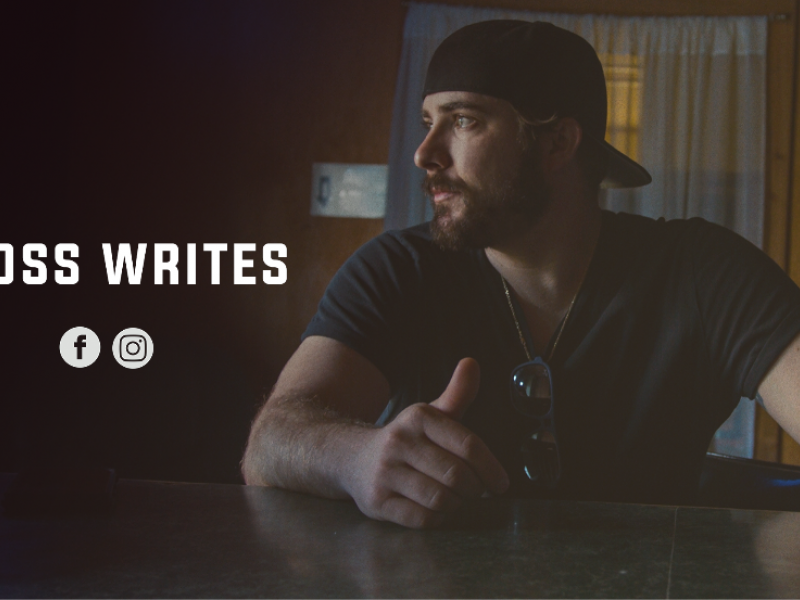 Born and raised in the small town of Monterey, Louisiana, Ross Ellis moved to Nashville after graduating college. The Sony Music Nashville recording artist has been writing songs since he arrived in Music City, having penned tracks for some of country music's biggest acts, including country superstar Tim McGraw. To showcase his expansive catalog of songs and offer fans some at home entertainment while we shelter in place to fight COVID-19, he launched “Ross Writes” on April 9. Performing daily at 6 pm CT on Facebook and Instagram Live, Ellis shares a different song he’s written during each performance. To check out past episodes and watch new ones, visit @RossEllisMusic on Instagram or Facebook.

“This is something I’d been thinking about for a while, but when this coronavirus mess broke out, I thought it’d be a great way to connect with fans until we can all be together again,” shares the man The Boot calls an “artist to watch.”  “I have written so many songs over the years since moving to Nashville. This is a great way to both showcase my ‘day job’ as a writer and highlight some of the incredible songwriters I go to work with every day.”

In the middle of recording his debut album for Sony Music Nashville when the “safer at home” order was released, the singer/songwriter has already notched 17 performances and shows no signs of stopping the daily sessions any time soon.

“I have enough songs to take us all the way through 2025 if we have to,” Ellis laughs. “These live sessions have been great though…seeing the comments. Getting feedback from fans in real time will definitely help us decided what makes this album and what doesn’t!”

The series follows a number of powerful songs released from Ellis since moving to Nashville including, breakthrough song “Buy and Buy” which hit No. 1 on SiriusXM The Highway’s Top 30 Countdown. The song has continued to receive a strong response from listeners reaching over 2 million in consumption to date and averaging almost 2000 in weekly sales with superstar Thomas Rhett telling Nash Country Daily “…it’s one of the freshest songs on the radio.”

Other releases include “Home for the Weekend” in 2017, followed by his hauntingly powerful song, “Ghosts,” in 2018 which Rolling Stone named a “top song of the week” and his most recent release the soulful and uplifting track, “Home to Me.”

For more information, watch “Who is Ross Ellis?” and visit rossellismusic.com or follow on social media @RossEllisMusic.

About Ross Ellis
Signed to Sony Music Nashville, Ross Ellis was born and raised in the small town of Monterey, Louisiana. At fifteen years old, he started the band, “Wayside” with his cousin and some high school friends. The band gained a strong following throughout Ellis’ high school and college years, playing venues across Louisiana and Mississippi. After graduating from University of Louisiana at Monroe, Ellis turned down multiple job offers to instead move to Nashville. After a month of living out of hotels, Ellis met singer/songwriters, Jameson Rodgers and Hunter Phelps, who were looking for a third roommate. After less than a year of working part time jobs, evening and weekend writing, and playing writer’s rounds, Ellis caught the attention of BMI’s Bradley Collins. A short time later, he signed at Big Deal Music. In late 2017, Ellis was named Sirius XM’s latest “Highway Find” with the release of his first single, “Home for the Weekend.” His hauntingly powerful song, “Ghosts,” reached the top 10 most played songs on SiriusXM’s The Highway. He also celebrated a career milestone when fellow Louisiana native, Tim McGraw, released in October of 2018 the new single, “Neon Church,” co-written by Ellis, Ben Goldsmith and Ben Stennis. Earlier this year Ellis headlined Tin Roof’s Inaugural “Nashville Hits the Roof” Concert Series Presented by SiriusXM’s The Highway. While continuing to write and record, he has toured alongside the likes of Chris Janson, Brett Young, Chase Rice, Raelynn, and Eli Young Band. For more information, visit rossellismusic.com or on social media @RossEllisMusic.