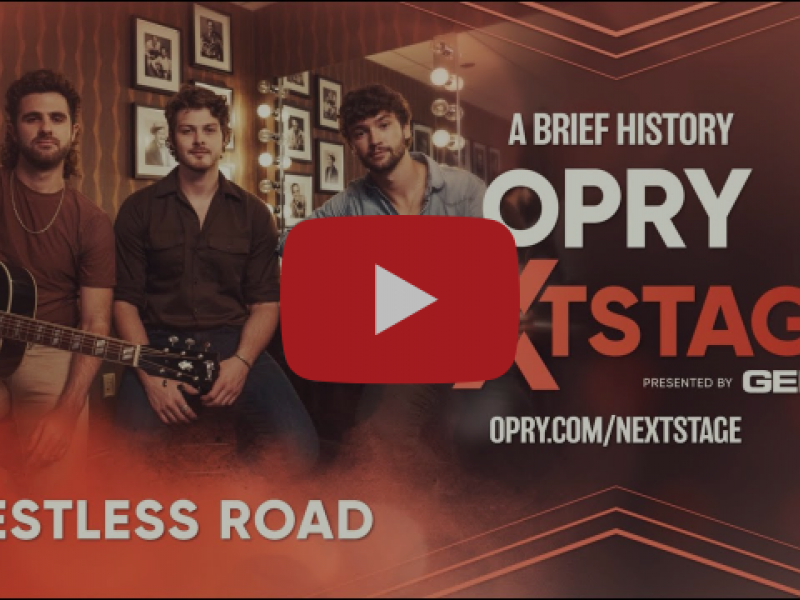 NASHVILLE, Tenn. – Today, the Grand Ole Opry announced the latest addition to its Opry NextStage Class of 2022 with breakthrough trio Restless Road, who will be the first band to be part of the NextStage program. Restless Road is the fourth act to join the 2022 class that includes Elvie Shane, Morgan Wade and BRELAND. Restless Road will make their NextStage debut with an Opry performance on August 20.

Developed by the Grand Ole Opry, NextStage is an artist discovery program that spotlights Country music’s rising talent and highlights one artist per month with featured original content created by Opry Entertainment Groups award-winning team, an Opry performance and support across the Opry Entertainment platforms, which include the Opry, Ryman Auditorium, WSM Radio, Ole Red and Circle Network. Additional artists will be announced in the coming months to complete the year with a total of seven artists.

Made up of three different but complementary voices, Restless Road is a powerhouse country band with one of the most auspicious breakout stories of 2020. Capturing the ear of country superstar Kane Brown, he signed the trio to his own label imprint, 1021 Entertainment. Praised by People, Taste of Country, Billboard and more, the trio’s powerhouse harmonies and soul-baring lyrics put them on numerous 2021 “Ones to Watch” lists, as members Zach Beeken, Colton Pack, and Garrett Nichols continue to rack up millions of on-demand streams.

Restless Road said, “We’re are beyond grateful to be chosen as an Opry NextStage Artist. Growing up we watched our country music heroes perform on the Opry stage, and that inspired us to keep going and chase our dreams even when it felt impossible. It means the world to us to be recognized by the Grand Ole Opry family, and we couldn’t be more excited to be a small part of Opry history.”

With a pulse on what is next in the Country music format and a deep commitment to supporting burgeoning talent, the program has cemented a strong track record in just three short years. The two previous NextStage classes have featured artists such as Parker McCollum, Lainey Wilson, Riley Green and Tenille Townes who all went on to earn ACM New Male and Female Artist of the Year trophies following their Opry NextStage debuts.

About Opry NextStage
Developed by Opry Entertainment Group and the Grand Ole Opry, Opry NextStage, presented by Geico, invests in the discovery of new artists and highlights one up-and-coming artist per month with featured original content, an Opry performance and support across the brand’s platforms to tell their stories and expand their audiences. For nearly a century, the Grand Ole Opry has created opportunities for artists throughout the Country music spectrum to make strong connections with fans and fellow artists – on its stages and across its channels – from terrestrial radio to network television to the digital universe and to Circle Network. Audiences around the world look to the Opry to showcase the very best in Country music.

About Restless Road
Made up of three different but complementary voices, country band Restless Road is “one of the most intriguing and exciting acts of the year” (Wide Open Country). Praised by People, Taste of Country, Billboard, and more, the trio’s powerhouse harmonies and soul-baring lyrics put them on numerous 2021 “Ones to Watch” lists, as members Zach Beeken, Colton Pack, and Garrett Nichols continue to rack up millions of streams. As NBC’s Today Show host Hoda Kotb put it: “That harmony…you feel it in your soul.” Since Zach and Colton joined forces after meeting on a singing competition (where they met future collaborator Kane Brown), Restless Road has stood out as one of the genre’s premier vocal forces. When Garrett came onboard in 2015, they knew they had something special. In February 2020, the trio unveiled their debut self-titled EP, which includes “Take Me Home,” featuring Kane Brown. A short year later, they dropped their track, “Took One Look At Her Momma,” which American Songwriter praised for its “captivating melody and lyrics that those in a relationship could benefit from hearing.” They recently released their tracks “Bar Friends,” “Hometown Tonight,” and “Headlights.” On January 21, 2022 they released “Growing Old With You” which topped the U.S. iTunes Country Charts for over 1 week, which they also performed as a feature on ABC’s The Bachelor. 2021 saw Restless Road on the road with Kane Brown as support on his “Blessed & Free Tour,” and their first headline tour, the “Bar Friends Tour” will commence on April 6, 2022. With all signs indicating Restless Road is a contender for best new vocal group, its members continue to write, sing, and perform together as they take the next steps down country music’s long and winding road.