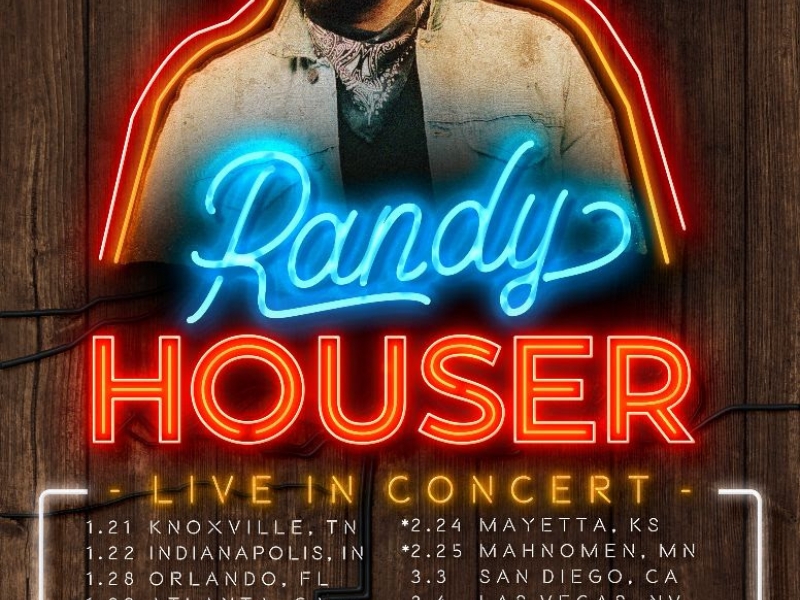 NASHVILLE, Tenn. — The New York Times opines Randy Houser is “a rich, viscous singer with a tremendous amount of vocal force” and NPR observes he “has always been among the notable exceptions, a performer in the tradition of Delbert McClinton’s, Hank Williams Jr.’s, Travis Tritt’s and Brooks & Dunn’s merging of roadhouse blues muscle and swing and honky-tonk grit.” In his first full tour since co-headlining with Jamey Johnson earlier this year, fans can see the Mississippi native live beginning January 21 when he embarks on a 26-show tour that wraps at the Ryman Auditorium mid-March. Tickets go on sale this Friday, Oct. 29.

“I’ve been spending a lot of time in the studio recording some songs and it’s time we play some of these live,” says the man Rolling Stone raves for his “arena-swallowing voice.” “I’m a big fan of Ella Langley’s and think folks will really dig her sound!”

Since moving to Nashville, Langley released her debut single “One of the Guys” and its follow up, “Match Made in Heaven,” showcasing her unique blend of country and rock, and leading to her first publishing deal in 2021 with Sony Music Publishing. She attended Auburn University while writing and performing around the southeast, growing her following and in the Alabama music scene as a strong female artist.

About Randy Houser
With an inimitable voice the New York Times describes as "wholly different, thicker and more throbbing, a caldron bubbling over," Randy Houser racked up three consecutive No. 1 hits and more than four million in singles sales to date with his Stoney Creek Records album, How Country Feels. He topped the charts with the title track, "Runnin' Outta Moonlight" and "Goodnight Kiss" (also his first No. 1 as a songwriter) and earned critical acclaim for his powerful delivery of the Top 5 smash and CMA Song of the Year-nominated "Like A Cowboy." Houser added a fourth No. 1 to his catalogue with "We Went" from his 2016 album, Fired Up. His critically-acclaimed 2019 Magnolia is out now with new music to follow in early 2022. For more information, go to RandyHouser.com.

About Ella Langley
Armed with her unique blend of country and rock, an easy confidence and always ready for a good time, Ella Langley grabs her audience from the first lick. Langley grew up in the small farming community of Hope Hull, Alabama. After high school, she attended Auburn University while writing and performing around the southeast. Langley’s unapologetic authenticity quickly grew her following and helped her be embraced in the Alabama music scene as a strong female artist. Langley has opened for legends like Montgomery Gentry, David Lee Murphy and Jamey Johnson, and for rising stars like Koe Wetzel, Riley Green and Parker McCollum. Since moving to Nashville, Langley released her debut single “One of the Guys” and its follow up, “Match Made in Heaven” in 2020. She signed her first publishing deal with Sony Music Publishing in August of 2021. Ella is currently touring and working on new music set to release in 2021. For more information go to EllaLangley.com.