FROM RADIO CITY TO MADISON SQUARE GARDEN: SEBASTIAN MANISCALCO PLAYS TO OVER 100,000 FANS IN NEW YORK CITY IN LESS THAN A YEAR 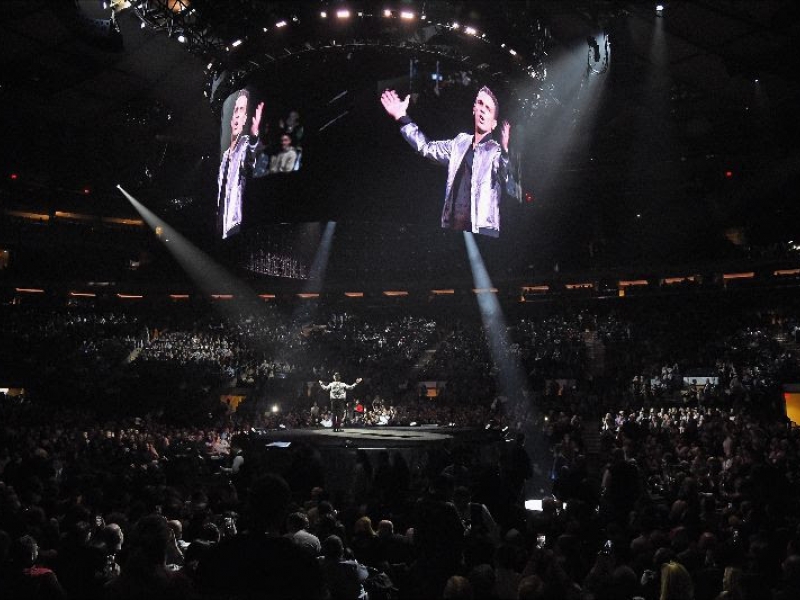 April 19-21, 2018, comedian Sebastian Maniscalco had a ‘this is it’ moment taking the stage knowing he had sold-out five shows at the legendary Radio City Music Hall which were taped for what would become his new Netflix Original special– Stay Hungry – streaming now. Across those five shows, he performed for 28,312 long-time fans and early believers in his unique comedic voice. It was a pinnacle moment that ultimately led to his decision to make the leap to “The World’s Most Famous Arena,” Madison Square Garden.

Fast-forward to Saturday night, Maniscalco emerged from beneath an in-the-round stage for the first-of-four shows at Madison Square Garden, greeting fans with a proud smile, perhaps still somewhat in disbelief. In attendance: 19,105. By 10:30 p.m. ET, as the second show of the night was already underway, Maniscalco had sold over 72,000 tickets bringing his tally with NYC audiences to over 100,000 fans in attendance in less than a year in The Big Apple with a few tickets still remaining for his final two shows on Sunday, January 20!

“Early on in my career I felt a connection with the audience in this region because so many people in New York/New Jersey/Philadelphia related to my family and upbringing,” shares the Chicago-native. “From my early days playing Gotham Comedy Club, to our shows at the Beacon and Radio City, and now having the first one down at The Garden, I always feel at home on stage in New York City thanks to the crowd.”

"We are proud that our legendary venues, the Beacon Theatre, The Chicago Theatre, Radio City Music Hall and Madison Square Garden, have been part of Sebastian's unbelievable trajectory. To have been part of his record breaking journey to four sold out Madison Square Garden shows, putting him in the ranks of Andrew Dice Clay, Kevin Hart, Amy Schumer, Chris Rock and other comedic superstars who have sold out MSG, has been a thrilling achievement," said Darren Pfeffer, executive vice president, MSG Live.

On Tuesday the Green Book star, dubbed “comedy’s new superstar” in a profile by “NBC Nightly News with Lester Holt,” stopped by SiriusXM’s “The Howard Stern Show” for an interview with the King of All Media. The two discussed his new Netflix special, acting with Viggo Mortensen in the award-winning film Green Book, his blockbuster tour and more.

On Wednesday, Maniscalco sat with "TODAY Show" anchors Hoda Kotb and Carson Daly to discuss his family’s influence on his routine. Then on Thursday, he chatted with "GMA Day" co-hosts Michael Strahan and Sara Haines on his journey from a performance at a boxing ring inside a bowling alley to the biggest boxing ring the world, Madison Square Garden.

Finally, on Friday, Maniscalco made his triumphant return to “The Tonight Show Starring Jimmy Fallon” where he asked Jimmy to show a clip from his first appearance on the show when he froze mid-stand-up set – remarking, “Look, everybody’s perfect on Facebook and Instagram – and I’m telling you right now, that was one of the scariest moments of my career – but hey, those things happen in life and you just pick yourself up… and look, he invited me back.”

Distinguished by The New York Times as having his “own kind of panache,” Maniscalco’s live performances have become critically-acclaimed events “embraced with thundering applause and tear-inducing laughter,” according to a recent Billboard review which described his Sept. 8, sold-out Greek Theatre performance as “devastatingly full-force comedy.”

With a string of record-breaking sold-out comedy appearances, a best-selling memoir Stay Hungry and a role in the Golden Globe-winning Green Book, 2018 was a milestone year, culminating in Maniscalco receiving Billboard’s inaugural Comedian of the Year award. And 2019 is already shaping up to be another landmark year for one of Forbes’ Highest Paid Comedians. With a role in Martin Scorsese’s upcoming picture The Irishman as well as a just released Netflix Original special streaming now, Maniscalco can also add playing FOUR shows at Madison Square Garden to his list of accomplishments.

Maniscalco’s wildly successful Stay Hungry Tour will continue through May 18, 2019 with over 30 stops across the U.S. Tickets and VIP packages are on sale now.