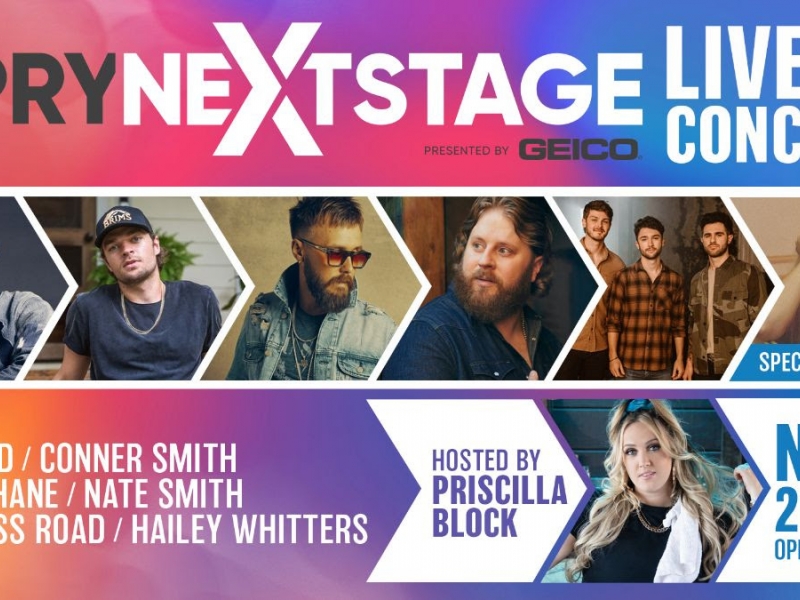 NASHVILLE, Tenn. (October 11, 2022) – The Grand Ole Opry has announced its second annual Opry NextStage Live In Concert, presented by Geico, that showcases some of country music’s top rising stars who have been a part of the NextStage artist discovery program. The Opry has also announced the latest and final member of the NextStage Class of 2022, viral country star, Nate Smith.

Smith will take the stage alongside other 2022 NextStage artists BRELAND, Restless Road, Elvie Shane and Conner Smith with special performances by NextStage alumnae Hailey Whitters and Priscilla Block, who will host the event. NextStage Live In Concert takes place on Sunday, Nov. 20 at the Grand Ole Opry House. Tickets are available for sale at Opry.com on Friday, Oct. 14.

On being named the Opry NextStage artist of November and being part of the show, Smith remarks “I am thrilled and honored to be the Opry’s NextStage artist for November. They have spotlighted so many artists that I admire, and I can’t wait to share a stage with them next month! There’s nothing like the Grand Ole Opry and it means the world to me to have their support.”

California native and Arista Nashville/Sony Music Nashville artist, Nate Smith, is carving his own path onto the country music genre. Smith made heads turn in 2020 when his song “Wildfire” went viral on TikTok. This year the singer-songwriter has recently garnered attention on Billboard’s Emerging Artists chart while his newest single “Whiskey On You” is climbing the country radio charts, and currently sits at No. 11 on Billboard’s coveted Hot Country Songs chart. Listen to “Whiskey On You” HERE.Throughout the year, Opry Entertainment works closely with Opry NextStage artists by investing in career development and providing opportunities for live performances, strategic marketing support and short-form documentary-style storytelling created by Opry Entertainment’s award-winning content team.

About Nate Smith
Featuring a mix of gritty backwoods soul, rock ‘n’ roll swagger and velvet-thunder vocals, Nate Smith is Sony Music Nashville’s latest signing whose personal journey inspired him to be a beacon of country-music hope, an inspirational mission he puts front-and-center. A California native, former worship leader, and lifelong music lover, Smith approaches that mission with a background as eclectic as it gets. Learning guitar at 13, Garth Brooks, Elvis Presley and Bob Seger were among those informing his powerful, fire-from-within vocals, while Michael Jackson made him crave the spotlight and Nirvana gave his sound a jagged edge. He first chased his neon dreams to Nashville in his early 20s – but it didn’t stick. The disheartened Smith returned home and thought he was “100-percent done” with his artistic journey…until a crucible of change burned away the past.

In 2018, Smith lost everything he owned in the devastating Camp Fire which tore through Paradise, California, now known as the deadliest and most destructive wildfire in the state’s history. Although his family was safe, he struggled to cope and turned back to music, hoping that it would help comfort himself and others. Help it did, inspiring a month-long road trip across the U.S. to Music City, writing music and playing dive bars along the way. Soon after his arrival to Nashville, Nate released his biggest song to date, “Wildfire,” and landed a publishing deal with Sony ATV. Since then, he’s released new music including “Sleeve” and “Under My Skin,” which has amassed over 60 million on-demand streams to date. The singer was named a Spotify Hot Country Artist to Watch for 2021 – an accurate prediction as he rounded out the year with a record deal and two brand new songs: “Raised Up” and the viral TikTok hit “I Don’t Wanna Go To Heaven.” The powerhouse vocalist is now making waves with his latest release, "Whiskey On You," which is currently climbing the country radio charts. Nate is managed by Kevin “Chief” Zaruk and Simon Tikhman with The Core Entertainment.