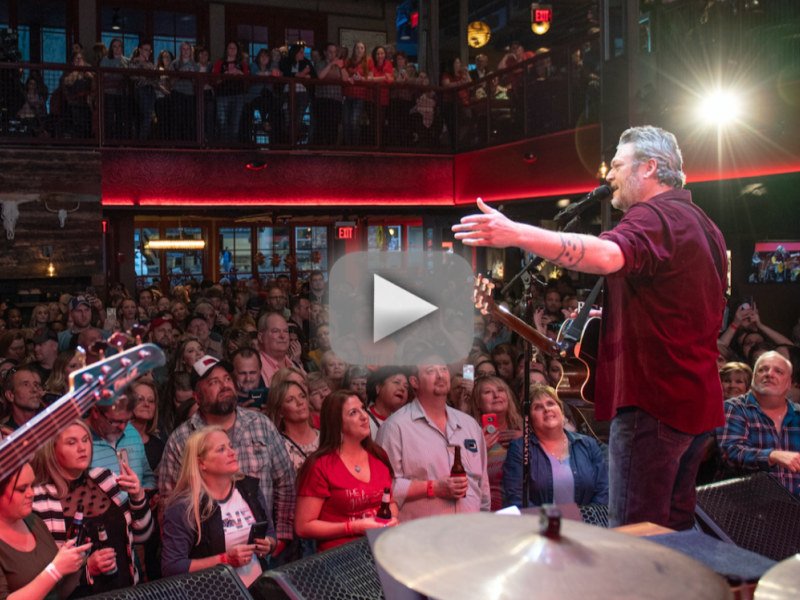 The grand opening celebrations began with a ribbon cutting and donation ceremony moderated by 650 AM WSM’s Bill Cody featuring Shelton and RHP CEO Colin Reed. Gatlinburg-Pittman High School was the recipient of a $54,214 donation to support music education in the local community. The funds were raised by Ole Red Gatlinburg auctioning 70 tickets to last night’s private Blake Shelton concert. The auction raised a grand total of $29,214 which combined with Ryman Hospitality Properties Foundation’s match of up to $25,000, brought the total to over $50,000 for Gatlinburg-Pittman High School’s music programs.

Following the ribbon cutting and donation ceremony, the festivities continued at Ole Red where Shelton officially christened the venue’s stage, performing his extensive catalog of hits for a packed house of over 500 fans.

Shelton opened the show with hit songs “Neon Light” and “All About Tonight," the latter a fitting start to what proved to be an unforgettable evening of music and fun.

“I feel like this place already has good vibes, we have started this off right,” Shelton shared with the rowdy Wednesday night crowd. “This will always be embedded in the walls and all the cracks and crevices in here. This night, the way it all started…thank you all for being here and having this much energy…I love this so much!”

Shelton closed the two-hour set with a collection of his hits including “Austin,” “Honey Bee,” and “Boys Round Here” before returning for an encore of “Footloose” and “God Gave Me You.”

Week-long "Spring Blake" fun for the can’t-miss new destination will continue with Blake-approved performances from former contestants on NBC’s “The Voice” from March 14 – 17.

About Ole Red
Ole Red is a lifestyle and entertainment brand inspired by Blake Shelton’s clever, irreverent third-chart hit, “Ol’ Red.” You can currently find Ole Red entertainment venues and products in three locations in the United States, the flagship multi-story bar, restaurant and entertainment venue in the heart of downtown Nashville’s famed Lower Broadway, the very first location in Blake’s hometown of Tishomingo, Oklahoma and the newest location in Gatlinburg, Tennessee. The Company has announced an additional location in Orlando, Florida (2020). Ole Red is owned and operated by Ryman Hospitality Properties, Inc. as part of its Opry Entertainment division. For additional information about Ole Red, visit us online at olered.com.

About Blake Shelton
Country Music Association’s 2012 “Entertainer of the Year,” five-time Male Vocalist of the Year winner and GRAMMY nominee Blake Shelton continues to add to his superstar status. His most recent album Texoma Shore became his sixth record to debut at No. 1 on the Billboard Top Country Albums chart and marked his 11th all-genre Top 10. Texoma Shore features tracks including the GRAMMY-nominated “I Lived It” and “I’ll Name The Dogs,” a romantic tune that boasts more than 115 million streams and marked his 25th No. 1 song. In the week following album launch, Shelton became the first artist in Country Aircheck / Mediabase history to have six songs chart simultaneously. Texoma Shore follows 2016’s Gold-certified If I’m Honest, the best-selling country album release of the year, which spawned three chart-topping songs and earned him a No. 1 on both the Billboard Top Country Albums and the all-genre Top Album Sales charts.

A member of the Grand Ole Opry, Shelton has earned a host of honors throughout his career including 20 ACM nominations and both the male and overall Video of the Year trophies at the 2018 CMT Awards. As a coach for the Emmy Award-winning television show "The Voice," Shelton is a six-time champion, most recently with his contestant Chloe Kohanski. Off stage, Shelton has teamed up with Ryman Hospitality to open a string of Ole Red entertainment restaurant venues, a nod to his 2001 hit of the same name. The first location in his hometown of Tishomingo, OK opened in September 2017, while the space on Nashville’s lower Broadway hosted a week-long grand opening in June of 2018. Locations in Gatlinburg, TN and Orlando, FL are due to follow.