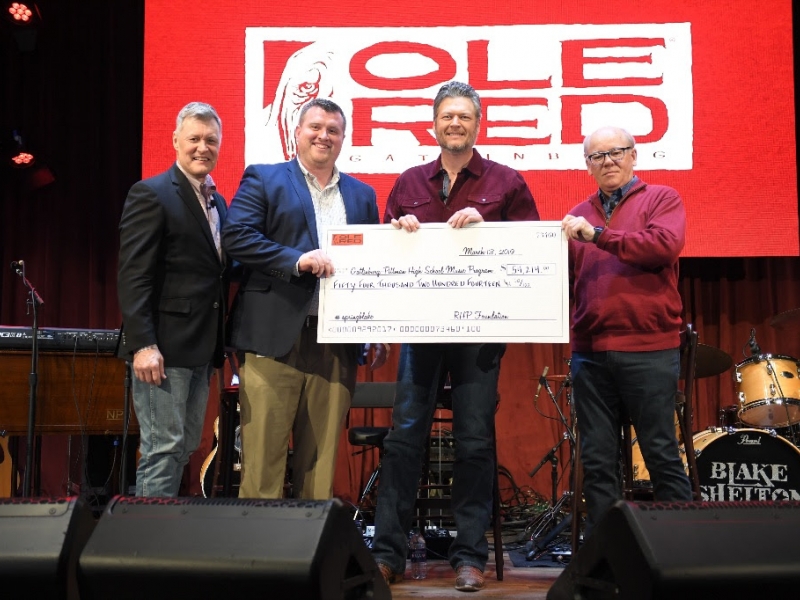 Ryman Hospitality Properties (RHP) and Blake Shelton’s long-awaited restaurant and bar Ole Red Gatlinburg is officially open in downtown Gatlinburg. The third of RHP’s Shelton-inspired entertainment venues celebrated today with a press conference and ribbon cutting moderated by 650 AM WSM’s Bill Cody featuring Shelton and RHP CEO Colin Reed.  During the press conference a special guest from Gatlinburg-Pittman High School was invited on stage. Shelton and Reed presented the school with a check for $54,214 in support of the local community and music education. The funds were raised by Ole Red Gatlinburg auctioning tickets to tonight’s private Blake Shelton concert with guests the Swon Brothers. The online auction raised a grand total of $29,214 which combined with Ryman Hospitality Properties Foundation’s match of up to $25,000, brought the total to over $50,000 for Gatlinburg-Pittman High School’s music programs."When I think of country music and where it started, I think of the mountains of East Tennessee," Shelton shared with press conference attendees. "I'm so proud to be here and I think this one may be my favorite location because the music is the focal point. The room is almost shaped like a speaker, I love it!""Part of our mission as a company is to find and foster the next generation of talent in country music," said Reed. "Much like we have done with Opry NextStage, we see Ole Red stages across the country as platforms for the next Blake Shelton."  "Gatlinburg-Pittman High School is extremely grateful to have been selected to receive such a generous donation from the folks at Ole Red,” said Tony Ogle, Principal of Gatlinburg-Pittman High School. “Their commitment to music within our community is definitely showcased by their amazing support of our band and choral programs at GPHS. A huge thank you goes to Mr. Blake Shelton for his personal support of this endeavor, and to Ryman Hospitality Properties for investing in our community and supporting our students."Shelton returns to Ole Red tonight for a private concert to officially christen the venue’s stage along with special guests the Swon Brothers. Those who didn’t win a coveted ticket to tonight’s performance can stream a portion of the concert live on Ole Red Gatlinburg’s Facebook page or at Ole Red Tishomingo where the "Spring Blake" party will be in full swing.

The week-long "Spring Blake" fun for the can’t-miss new destination will continue with live music programming through March 17. Beginning Thursday at 11:30 a.m. some of the best bands from Nashville and around the Southeast will perform daily. Ole Red will also be serving up their full, made-from-scratch menu, including signature items, such as the “Champagne of Fried Chicken,” and Gatlinburg-only specialties, like the “Ober Gatlin-burger,” plus Blake-approved cocktails and a great selection of local beers.

March 14-17, Ole Red Gatlinburg will feature a Blake-approved lineup of free performances from former contestants on NBC's "The Voice."

About Ole Red
Ole Red is a lifestyle and entertainment brand inspired by Blake Shelton’s clever, irreverent third-chart hit, “Ol’ Red.” You can currently find Ole Red entertainment venues and products in two locations in the United States, the flagship multi-story bar, restaurant and entertainment venue in the heart of downtown Nashville’s famed Lower Broadway, the very first location in Blake’s hometown of Tishomingo, Oklahoma. The Company has announced additional location in Orlando, Florida (2020). Ole Red is owned and operated by Ryman Hospitality Properties, Inc. as part of its Opry Entertainment division. For additional information about Ole Red, visit us online at olered.com.
About Ryman Hospitality Properties, Inc.
Ryman Hospitality Properties, Inc. (NYSE:RHP) is a REIT for federal income tax purposes, specializing in group-oriented, destination hotel assets in urban and resort markets. The Company’s owned assets include a network of four upscale, meetings-focused resorts totaling 8,114 rooms that are managed by lodging operator Marriott International, Inc. under the Gaylord Hotels brand. The Company is a joint venture owner of the 1,501-room Gaylord Rockies Resort & Convention Center, which is also managed by Marriott International, Inc. Other owned assets managed by Marriott International, Inc. include Gaylord Springs Golf Links, the Wildhorse Saloon, the General Jackson Showboat, The Inn at Opryland, a 303-room overflow hotel adjacent to Gaylord Opryland and AC Hotel Washington, DC at National Harbor, a 192-room hotel near Gaylord National. The Company also owns and operates media and entertainment assets, including the Grand Ole Opry (opry.com), the legendary weekly showcase of country music’s finest performers for over 90 years; the Ryman Auditorium, the storied former home of the Grand Ole Opry located in downtown Nashville; 650 AM WSM, the Opry’s radio home; and Ole Red, a country lifestyle and entertainment brand. For additional information about Ryman Hospitality Properties, visit www.rymanhp.com.
About Blake Shelton
Country Music Association’s 2012 “Entertainer of the Year,” five-time Male Vocalist of the Year winner and GRAMMY nominee Blake Shelton continues to add to his superstar status. His most recent album Texoma Shore became his sixth record to debut at No. 1 on the Billboard Top Country Albums chart and marked his 11th all-genre Top 10. Texoma Shore features tracks including the GRAMMY-nominated “I Lived It” and “I’ll Name The Dogs,” a romantic tune that boasts more than 115 million streams and marked his 25th No. 1 song. In the week following album launch, Shelton became the first artist in Country Aircheck / Mediabase history to have six songs chart simultaneously. Texoma Shore follows 2016’s Gold-certified If I’m Honest, the best-selling country album release of the year, which spawned three chart-topping songs and earned him a No. 1 on both the Billboard Top Country Albums and the all-genre Top Album Sales charts.

A member of the Grand Ole Opry, Shelton has earned a host of honors throughout his career including 20 ACM nominations and both the male and overall Video of the Year trophies at the 2018 CMT Awards. As a coach for the Emmy Award-winning television show "The Voice," Shelton is a six-time champion, most recently with his contestant Chloe Kohanski. Off stage, Shelton has teamed up with Ryman Hospitality to open a string of Ole Red entertainment restaurant venues, a nod to his 2001 hit of the same name. The first location in his hometown of Tishomingo, OK opened in September 2017, while the space on Nashville’s lower Broadway hosted a week-long grand opening in June of 2018. Locations in Gatlinburg, TN and Orlando, FL are due to follow.