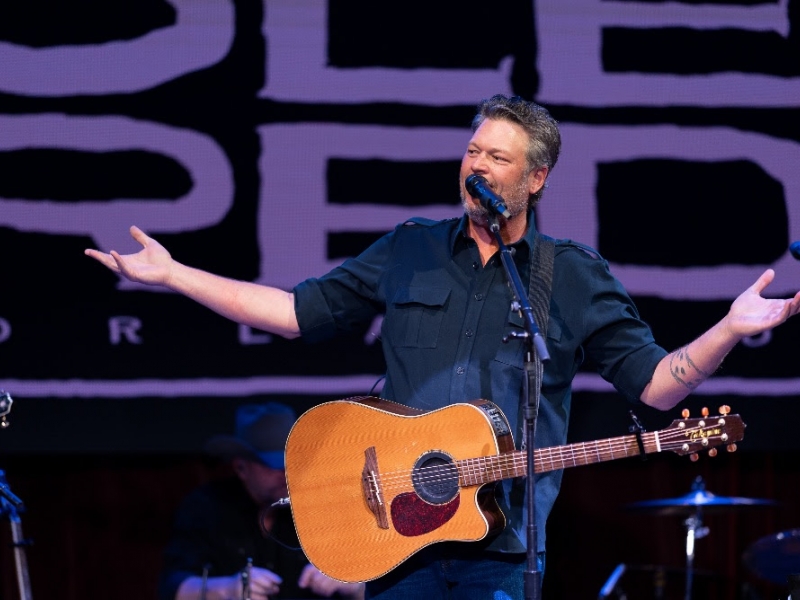 Calling the night an unofficial rehearsal for his performance on Sunday’s ACM awards, Shelton shared with the intimate but lively crowd that it was the first time he had performed his single “Minimum Wage” live after the COVID-19 pandemic brought touring and live entertainment to a standstill.

“I wanted to come here and do a proper grand opening,” said Shelton. “Even if it’s not the same as having this whole room full of people, we are going to pretend it is tonight. If you haven’t been to Ole Red before, hopefully by the end of tonight you’ll know that’s what this is all about: having fun and seeing live music.”

Earlier in the day, Shelton was joined by Ryman Hospitality Properties Chairman and CEO Colin Reed for a press event hosted by WSM and Circle TV’s Bill Cody where they discussed the recovery of the music and hospitality industries, the inspiration behind the Ole Red brand, and Blake’s first full-band performance in more than a year. Shelton also presented Ole Red Orlando with a special outfit he wore on NBC’s “The Voice” along with an outfit worn by fiancé Gwen Stefani. Both outfits are now on display at the venue.

About Ole Red
Ole Red is a lifestyle and entertainment brand inspired by Blake Shelton’s clever, irreverent third-chart hit, “Ol’ Red.” You can currently find Ole Red entertainment venues and products in four locations in the United States, the flagship multi-story bar, restaurant and entertainment venue in the heart of downtown Nashville’s famed Lower Broadway, the very first location in Blake’s hometown of Tishomingo, Oklahoma, a location in the heart of the Great Smoky Mountains in Gatlinburg, Tennessee and most recently the fourth location which opened Orlando, Florida last summer. Ole Red is owned and operated by Ryman Hospitality Properties, Inc. as part of its Opry Entertainment division. For additional information about Ole Red, visit us online at OleRed.com.