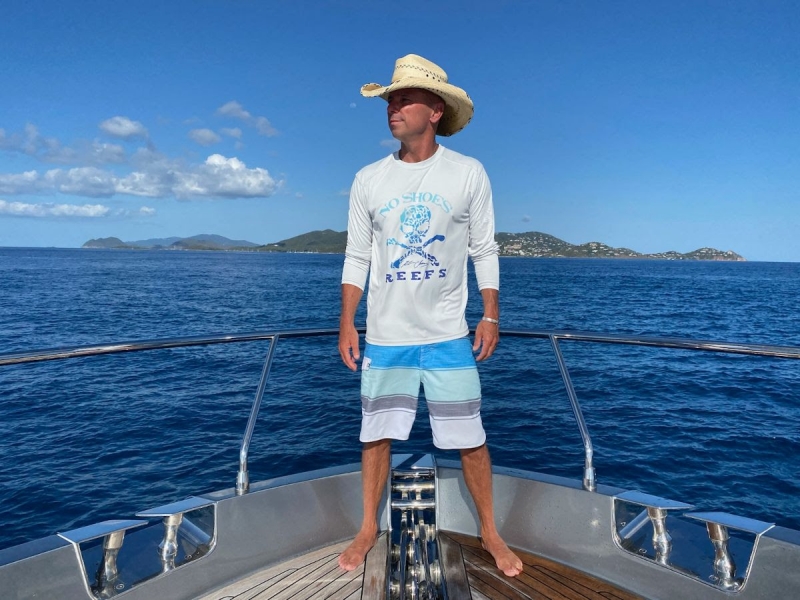 TAMPA, Fla. – With Here And Now 2022 kicking off at Tampa’s Raymond James Stadium on Saturday, April 23, No Shoes Reefs is celebrating Kenny Chesney’s return to the road by teaming with Tampa Bay Watch for five days of Earth Week activities, culminating with their Living Shoreline Project deploying Reef Balls filled with Saltmarsh Grass and planting Saltmarsh Grass behind them to prevent further erosion and rebuild lost shoreline on Friday, April 22.

“Talk about a way to merge my worlds,” Chesney says. “We have been doing various projects around the country. But when Tampa Bay Watch had a week of actual activities designed to not just walk people through the process, but teach them how to not only make Reef Balls but allow people to deploy the Reef Balls filled with Saltmarsh Grass on Earth Day, it was the best kind of synergy possible.”

The Living Shoreline Project will sink the Reef Balls into the sediment, where they are heavy enough to remain lodged and allow the Saltmarsh Grass to grow. Their presence protects the shore from further erosion, and the Saltmarsh grass growth and eventual coral growth rebuilds the shoreline that’s been lost since the ‘50s.

Three No Shoes Reefs Ambassadors from Ohio, long time members of No Shoes Nation who’ve taken up the cause, are participating in Friday’s activities, making it truly hands on for NSN and NSR. And to mark the occasion, a special sea grass green t-shirt marking the partnership with Tampa Bay Watch – each made from five repurposed plastic bottles – will be made available to support their alliance at www.league-legacy.com/pages/noshoesreefs.
No Shoes Reefs has had a busy year. Recently profiled in TIDE magazine, the organization has been integral in various projects in Florida, Georgia, South Carolina, Maryland and Connecticut, expanding its reach to support other organizations sharing its vision and efforts.

Chesney offers, “When you can work with local groups, they understand their needs, their issues – and by supporting them, we can help them take care of their oceanfront in ways that make sense. But being able to be part of something so all-encompassing in Tampa as we’re starting to get back to bringing No Shoes Nation together is the perfect thing to kick off a tour.”

About Tampa Bay Watch:
Tampa Bay Watch is an environmental nonprofit organization dedicated to fostering a healthy Tampa Bay watershed through community-driven restoration projects, education programs and outreach initiatives. Founded in 1993, the organization empowers thousands of community volunteers throughout the year to plant native grasses, construct oyster reefs and remove fishing line and marine debris from coastlines in order to help the bay recover from its environmental threats. The organization also focuses on environmental education striving to create guardians of the Tampa Bay estuary from a young age by providing field experiences that combine classroom resources with hands-on field marine science and environmental exploration.