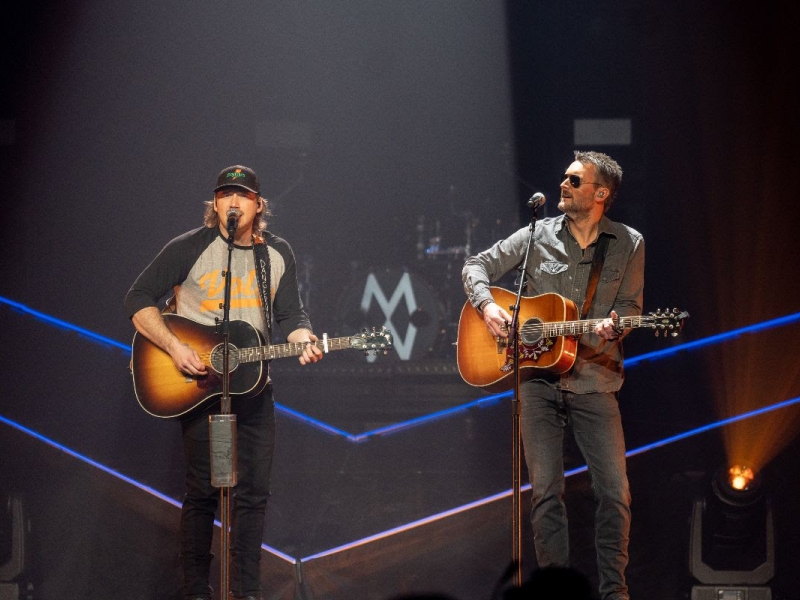 The Chief Surprised the At-Capacity Crowd,Joined Wallen for “Quittin’ Time” and “Smoke A Little Smoke”

“A kid from nowhere, with the ability to distill his life in a way that pulls others to him,
he never intended for all of this, but here he is.” – Pollstar

NASHVILLE, Tenn. – “It feels good to be here,” Morgan Wallen said, his first time addressing the at-capacity on -their-feet-crowd three songs in. “Last night we had a show and it was a really good crowd, but you guys are louder already.” The near-deafening crowd erupted as the Dangerous singer settled in for night two-of-three at Bridgestone Arena, an accomplishment that has him joining the ranks of just three other country acts to-date: Garth Brooks, Eric Church and Taylor Swift.

Amid pyro, dry ice and 86,000lbs. of production, Wallen slowed things down, making a point to connect the music and melodies with the moments that inspired them. “I don’t know if I ever wrote a song til I was 19 or 20,” Wallen revealed. “I used to write poems and stuff like that when I was in school… but really, I started singing when I was three years old. My momma threw me up on stage at church where my dad was a preacher at, and I’ve been singing ever since.”

Getting comfortable, he continued, “I guess I always knew I’d be singing. I always felt a connection to singing. I didn’t know if I could write songs or not. I started doing that in my parent’s garage on the workout weight bench,” he paused to laugh while adjusting his guitar. “I’d write a song then go in while my momma was cookin’ dinner or something and play it for her. I gotta give my mom credit, she didn’t always tell me I was good, which I appreciated.” Pausing to grin and note, “I got a real good momma, she’ll be here tomorrow night.

“This song,” he paused and said of his third No. 1, “Chasin’ You.” “…I moved to Nashville in July 2015 and wrote this in November or December, and I remember at the end of the day when I finished, we listened back and got really excited … and I thought ‘this is a good song – we got something special.’ I was just writing about something I’d been through. This song gave me a lot of encouragement and faith that I was doing the right thing, moving to Nashville, and I knew after we wrote this that I was gonna get to do this. I didn’t know how, and I didn’t know we’d sell out three nights at Bridgestone, but this song is special to me for a lot of reasons. Because of you guys, you made it a No. 1 on Country music radio.”

As Wallen approached midway “Quittin’ Time,” he looked to his left as the man who penned the song, Eric Church -- carrying his Chief-strapped Hummingbird guitar -- shocked the audience sauntering to center stage. After, Wallen shared, “If you’re a fan of me you know how big of a fan I am of this man right here, so I appreciate y’all coming out here.” Revealing that Church was on spring break and came back early to surprise the crowd on night two, the grinning North Carolinian jested, “I came a long way, we gotta do one more,” before the two collaborated on his career-defining cut off Carolina, “Smoke A Little Smoke.”

Whether joined on stage by special guests (HARDY, Larry Fleet or icon Eric Church), or working the stage with just a guitar/vocal like on “Cover Me Up,” Pollstar observes, “the winsome ‘Silverado For Sale’ suggests the way kids paying their own way pass it along and ‘Rednecks, Red Letters, Red Dirt’ offers truths that reach a little deeper than the field party or dive bar.” Last night, the St. Patrick’s Day crowd at Bridgestone got to experience both.