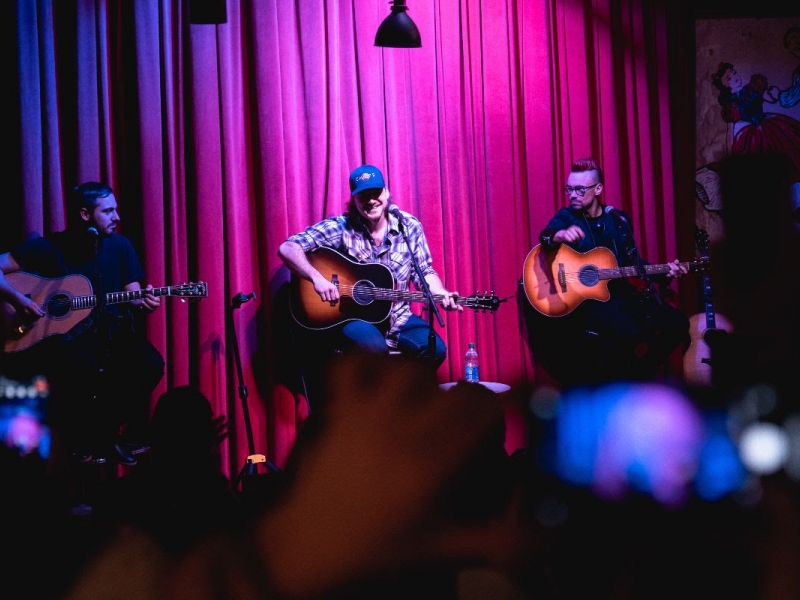 NASHVILLE, Tenn. – After three nights of at-capacity crowds in Music City on his Dangerous Tour, totaling more than 40,000 fans across consecutive nights at Bridgestone Arena, Morgan Wallen kept the music playing with a pop-up, stripped-down acoustic set for a crowd of roughly 100 fans at Graduate Nashville’s Cross-Eyed Critters Watering Hole on Saturday, March 19, 2022.

The fourth show in four days made good on a prize rewarded to a raffle winner from his Morgan Wallen & Friends Show at Marathon Music Works on Sept. 8, 2021, where over $800,000 was raised for flood victims of Middle Tennessee, in partnership with The Community Foundation of Middle Tennessee and the Tennessee Emergency Response Fund.

Fans were given a hint of the discreet pop-up show via an Instagram post made by Graduate Nashville just hours before the show’s start. They did this with a picture of one of the animatronic animals wearing a guitar strap that said “Dangerous.” It also tagged Morgan Wallen asking if it was “Quittin’ Time” yet. Seated on a stage with guitar in hand, alongside bandmates Dominic Frost and Tyler Tomlinson, the East Tennessean treated those in attendance to cuts from his ACM Album of the Year, Dangerous, including its title track, current single “Wasted on You,” No. 1s “More Than My Hometown” and If I Know Me’s “Chasin’ You.”

In tune with the crowd and exchanging lively banter, Wallen lamented his frustration that the University of Tennessee’s men’s basketball team had just lost minutes before taking the stage. Just days before, Wallen sported a Tennessee Volunteers’ shirt on stage Thursday night at Bridgestone Arena following the Vols’ win in the first round of the NCAA tournament.

The singer/songwriter also performed a solo/acoustic version of his Top 25 collaboration with ERNEST, “Flower Shops,” before closing the night with his No. 1 smash “Whiskey Glasses.”

In a statement Wallen has shared on the foundation’s website, he says the idea for the organization came out of his own family’s experience. “Since my parents fostered and now officially adopted my sister Lacey, I’ve witnessed what love and care can do for a child that didn’t have it before. She has transformed into a confident, trusting and happy kid,” he writes. “There are many elements that aid in the development and protection of an adolescent’s life, and that is why I created the foundation so a child’s resources are not limited due to their circumstances.”

In 2022, $3 from every ticket sold on his Dangerous Tour benefits More Than My Hometown Foundation. The three-night stop at Bridgestone last week alone raised over $120,000 that will be put into initiatives for adolescent development, resources and local communities.

ABOUT MORGAN WALLENThe New Yorker dubbed Morgan Wallen “the most wanted man in country” in part due to the CMA Award Winner’s 9 billion on-demand streams, multi-platinum certifications and four consecutive chart-toppers, and in part due to his flyover appeal: “Bruce Springsteen meets Larry the Cable Guy.” The critically-acclaimed follow-up to his Double Platinum breakout If I Know Me, Dangerous: The Double Album (Big Loud/Republic Records), topped 2021’s all-genre Billboard 200 Albums year-end chart with 4.1 million units sold and sparked an in-demand 58-show THE DANGEROUS TOUR in 2022 that kicked off this February and sees the “Up Down” (2017), “Whiskey Glasses” (2018), “Chasin’ You” (2019), “More Than My Hometown” (2020), “7 Summers” (2020, named one of Time Magazine’s Best Songs of the Year) and “Sand In My Boots” singer playing two nights at Madison Square Garden and three nights at Bridgestone Arena. Working outside the traditional Nashville mainframe with producer Joey Moi, Hits Magazine notes, “Wallen continually colors outside the lines,” adding, in turn “he’s connected to his fans in ways unprecedented for a country star.” With over 800k tickets already sold for 2022 just 14-shows in, $3 from every ticket sold benefits the songwriter from East Tennessee’s More Than My Hometown Foundation.