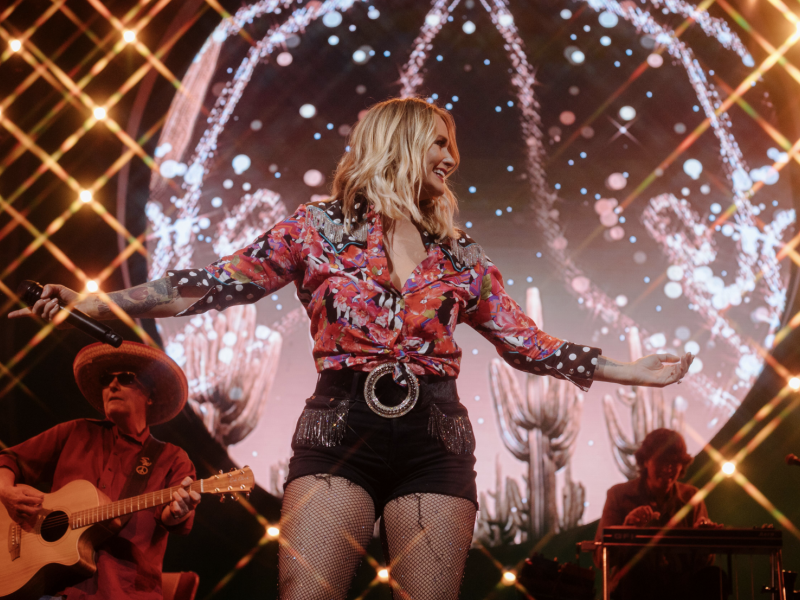 After gracing 25 cities with a rollicking night of country music featuring a side of sass, the rotating, all-female Roadside Bars & Pink Guitars Tour came to an end on Saturday, Nov. 23, in Greensboro, N.C. – but not before Miranda Lambert and company treated fans to a final weekend of what the Milwaukee Journal-Sentinel called “the most exciting country concert of the year.”

As Billboard proclaimed of the tour’s New Orleans stop, the all-star lineup – which included Lambert’s Pistol Annies bandmates on all dates along with a rotating cast of Maren Morris, Elle King, Ashley McBryde, Tenille Townes and Caylee Hammack – created “a mecca for fans of country artists telling honest, rich stories via massive vocal performances and with a healthy dose of spunk.” The New Orleans Advocate also praised the show, noting that “all night [Lambert] alternated fierce and fragile, bad and broken. Her pure, expressive country twang was well-suited for both. So, too, her onstage attitude: strong, self-assured, unafraid to live out loud and take charge.”

Meanwhile in Connecticut, The Republican declared that “regardless of genre or gender, Lambert has long been one of the surest bets on the live performance circuit and more than lived up to that reputation,” while in Minnesota the Minneapolis Star-Tribune noted that “she dazzled with the unwavering conviction in her voice, the brilliant pacing of her show and the uplifting camaraderie of her singing friends who participated in the consistently satisfying four-hour marathon.”

As The Boot noted during the Columbus, Ohio stop, “the all-female trek… lived up to expectations and then some,” specifically highlighting “the diverse blend of onstage energy [that] shone through during the show” along with “the show’s smart, well-paced sequencing” and recognizing that “Lambert’s new songs make perfect sense with her back catalogue.”

Such new songs off Lambert’s Nov. 1 chart-topping album Wildcard include current Top 15 single “It All Comes Out in the Wash,” nominated last week for Best Country Song at the upcoming GRAMMY Awards alongside her Pistol Annies project Interstate Gospel, which earned a nod in the Best Country Album category.

“I started this tour inspired by all of the talented women joining me on the road and I’m ending this trek energized by all of the memories, camaraderie, and fans we met along the way,” shared Lambert. “As we head into Thanksgiving, I’m incredibly grateful to my fans for supporting this beautiful journey and can’t wait to get back out there in January on the Wildcard Tour and keep playing this new music.”Fans won’t have to wait long to see Lambert on the road again, as her upcoming Wildcard Tour kicks off Thursday, Jan. 16 in Tupelo, Miss. with special guests Cody Johnson and LANCO as well as Randy Rogers Band and Parker McCollum on select dates.

First though, Lambert will help ring in the holiday season with performances of “Bluebird” and “Settling Down” off her Wildcard album as part of “The Thanksgiving Day Parade on CBS” television special, live from New York City this Thursday, Nov. 28, at 9 a.m. ET (delayed 9 a.m. PT).

For more information and to purchase tickets, visit www.MirandaLambert.com and follow @MirandaLambert on social media.

About Miranda Lambert
Vanner Records/RCA recording artist Miranda Lambert released her highly anticipated new studio album WildcardNov. 1, which includes her latest country radio single, “It All Comes Out in the Wash.” Starting in January 2020, Miranda will embark on her headlining Wildcard Tour with special guests Cody Johnson and LANCO.

The most decorated artist in the history of the Academy of Country Music, Lambert is the recipient of more than 70 prestigious awards and special honors: 34 ACM Awards (including 9 ACM Female Vocalist of the Year Awards), 13 CMA Awards (Country Music Association), 2 GRAMMY Awards, the Harmony Award (Nashville Symphony), Artist in Residence (Country Music Hall of Fame), the ACM Gene Weed Milestone Award, ACM Song of the Decade Award, and recently was named 2019 RIAA’s Artist of the Year.

The celebrated singer/songwriter has released seven studio albums that all debuted at No. 1 on the Billboard Top Country Album Charts, including the critically acclaimed album Wildcard (2019), The Weight of These Wings(2016), Platinum (2014), Four The Record (2011), Revolution (2009), Crazy Ex-Girlfriend (2007) and Kerosene(2005). In addition, she released three albums with her trio, the Pistol Annies.

Her clothing and cowboy boot collection, Idyllwind, is a private-label brand sold exclusively at all Boot Barn stores nationwide and online at www.idyllwind.com.

Miranda’s MuttNation Foundation, a 501c3 nonprofit, is celebrating its 10th Anniversary. Since its inception in 2009, MuttNation has raised over $3.9 million in support of its mission to promote the adoption of rescue pets, support animal shelters across the country, advance spay &amp; neuter, and assist with the transport of animals during times of natural disaster. Visit www.muttnation.com to learn more.