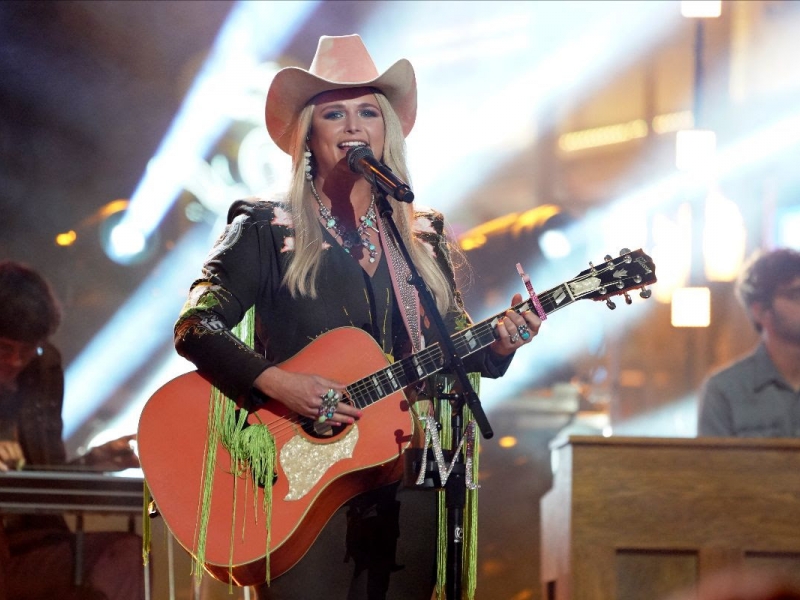 Win for “If I Was a Cowboy,” Directed by Trey Fanjoy, Marks Lambert’s
12th CMT Music Award

NASHVILLE, Tenn. – “Martina McBride just handed me a buckle, I love that,” shared Female Video of the Year winner Miranda Lambert as she accepted the fan-voted honor at this year’s CMT Music Awards from legend McBride. “I’m so happy to be part of the women in country music today. We are really starting to kick some ass and I’m so excited about it!” The win for “If I Was a Cowboy,” the top 20 and climbing lead single from her forthcoming album Palomino was directed by Lambert’s long-time collaborator Trey Fanjoy and finds the country music superstar subverting gender narratives in the clever and unexpected clip. With a break in the downpour of rain that had drenched Lower Broadway most of the evening, the reigning ACM Entertainer of the Year took the stage and proved why she holds that title delivering an explosive debut television performance complete with fireworks for the packed crowd.

The win comes the same day the 12-time CMT Music Award winner and Elle King hit No. 1 on both Billboard’s Country Airplay and Mediabase/Country Aircheck Charts with their GRAMMY-nominated, certified Platinum hit, “Drunk (And I Don’t Wanna Go Home).” The track topping the charts this week is the first time a female duet has reached the No. 1 spot on Billboard’s Country Airplay chart since Reba McEntire and Linda Davis’ “Does He Love You” in 1993.

Lambert is set to release her eighth studio album Palomino on April 29 via Vanner Records/RCA Records Nashville. With the progressive 15-song album, her first solo project since 2019’s GRAMMY-winning Wildcard (despite a busy interim that included releasing the GRAMMY-nominated collaborative project The Marfa Tapes as well as the Pistol Annies’ celebratory Hell of a Holiday), Lambert has crafted a record that explores the world and the people in it, seeking beauty and adventure all around. Yet even with primarily fictional characters leading the way, the Texan’s own identity emerges lyrically in the second verse of the lead track, out now: I got my own kind of country / Kind of funky.

That signature style will be on full display later this year, when the woman celebrated as “one of this century’s best artists… deeply unafraid to follow her own rules, co-write almost all her own songs, and (lyrically) burn down the occasional house or two” in Rolling Stone’s “The RS Interview,” on stands in the current April issue, heads to Las Vegas for her “Velvet Rodeo.” Tickets to the 24-date Zappos Theater at Planet Hollywood Resort & Casino residency beginning this September and are on sale now via Ticketmaster.com/MirandaVegas.

In addition to her Las Vegas residency, fans can also hear the new music live when Lambert joins forces with Little Big Town to co-headline this spring’s The Bandwagon Tour, a joint outing produced by Live Nation, featuring The Cadillac Three as support on all dates and visiting 15 cities beginning Friday, May 6 in Houston, Texas.

Following 2019’s critically acclaimed release of her seventh consecutive No. 1 album, Wildcard, the Texas native ushered in her next musical era with the recent release of current single “If I Was a Cowboy,” while also adding her voice to Netflix’s new season of Queer Eye with inclusive anthem “Y’all Means All.” She is set to hit the road on The Bandwagon Tour with Little Big Town this spring.

In addition to Wildcard, the celebrated singer/songwriter’s lauded discography includes The Weight of These Wings (2016), Platinum (2014), Four The Record (2011), Revolution (2009), Crazy Ex-Girlfriend (2007) and Kerosene (2005). She has also released three albums with her trio, the Pistol Annies, as well as 2021’s GRAMMY-nominated The Marfa Tapes, a critically acclaimed, raw and intimate recording with collaborators Jack Ingram and Jon Randall.