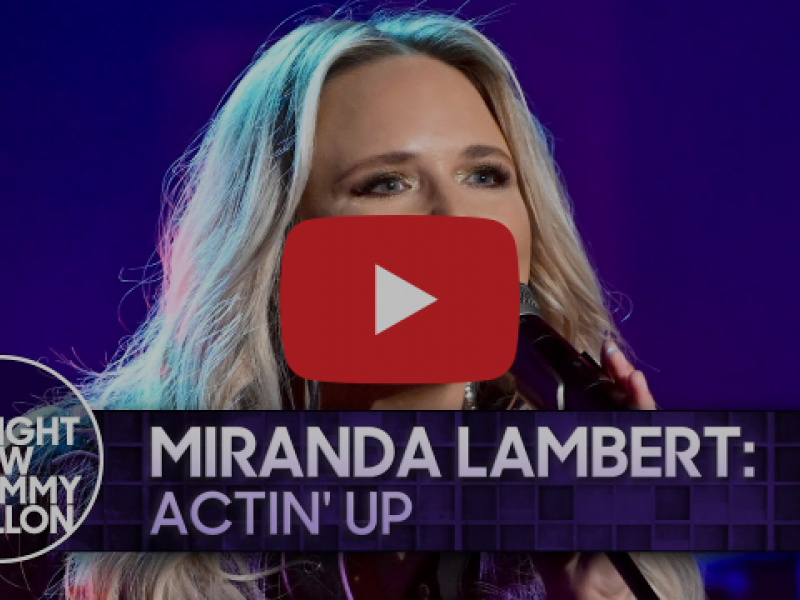 Watch the TIME100 Honoree Perform This Sunday, June 12 at 8/7c on ABC’s Broadcast of “TIME100: The World’s Most Influential People”The Bandwagon Tour Wraps This Weekend Ahead of Reigning Entertainer of the Year’s
Velvet Rodeo Las Vegas Residency This Fall

“Got my own kind of country, kind of funky, turn it up” she taunted, clad in a custom Aubrey Hyde x Fort Lonesome set featuring neon palomino horses, Idyllwind metallic green booties and her signature fringe while delivering a lively rendition of the song NPR celebrates as “steeped in Lambert’s brand of sass and swagger” with Stereogum elaborating, “swagger-mode Miranda Lambert is the best Miranda Lambert.”

Viewers can see Lambert perform the album cut again this Sunday, June 12 at 8/7c as TIME and ABC bring viewers inside the exclusive TIME100 Gala for the first time ever with the “TIME100: The World’s Most Influential People” television event. As the only country artist on 2022’s TIME100 list, Lambert is part of a distinguished group of individuals honored for their impact, innovation and achievement.

Whether challenging conventional notions in her current Top 15 “If I Was A Cowboy” with the subversive lyrical question “So mommas if your daughters grow up to be cowboys, so what?,” using her voice to write and record the inclusive “Y’all Means All” anthem, or lending her time to raise money for the MuttNation Foundation (her nonprofit that provides support to animal shelters and encourages adoption), as Pitchfork notes, Lambert “manages the hat-trick of both timeliness and timely activism.”

The three-time GRAMMY winner also wraps her co-headlining The Bandwagon Tour with Little Big Town this weekend having earned rave reviews throughout its run. With Charleston’s Post and Courier celebrating the show’s “fringe-flingin’, boot-stompin’, girl power energy” and the Houston Press praising the way the set “bounced between tenderhearted, vulnerable tunes… and the stuff she truly excels at, songs which allow her to be a complete and total badass,” the Tennessean also noted, “the presence of mournful blues that has colored Lambert’s voice since the beginning of her career felt more deeply worn into the crevices of her singing and guitar playing than ever before.”

Lambert will once again take the stage this fall as her Velvet Rodeo residency takes over the Zappos Theater at the Planet Hollywood Resort & Casino in Las Vegas starting in September. For more information and to purchase tickets, visit www.MirandaLambert.com.

About Miranda Lambert
Available everywhere now, Palomino, the eighth solo album from Vanner Records/RCA Nashville superstar Miranda Lambert, is the latest installment in a storied career that has spanned seven No. 1 solo albums, 10 No. 1 hit radio singles, more than 70 prestigious awards and countless sales certifications, earning the reigning ACM Entertainer of the Year praise from NPR as “the most riveting country star of her generation.”

Following 2019’s critically acclaimed release of her GRAMMY Award-winning album, Wildcard, the Texas native ushered in her next musical era with the recent release of Palomino lead single “If I Was a Cowboy” (currently climbing the Top 15 at Country radio), while also adding her voice to Netflix’s new season of Queer Eye with inclusive anthem “Y’all Means All.” Her co-headlining The Bandwagon Tour with Little Big Town is currently underway and the 2022 TIME100 honoree kicks off her Velvet Rodeo Las Vegas residency at the Zappos Theater at the Planet Hollywood Resort & Casino this September.

Lambert’s MuttNation Foundation, a 501c3 nonprofit has raised over $6 million since its inception in 2009. The Foundation’s mission is to promote the adoption of rescue pets, support animal shelters across the country, advance spay & neuter and assist with the transport of animals during times of natural disaster. For more information, visit www.muttnation.com.
MirandaLambert.com | Facebook | Twitter | Instagram | YouTube# # #