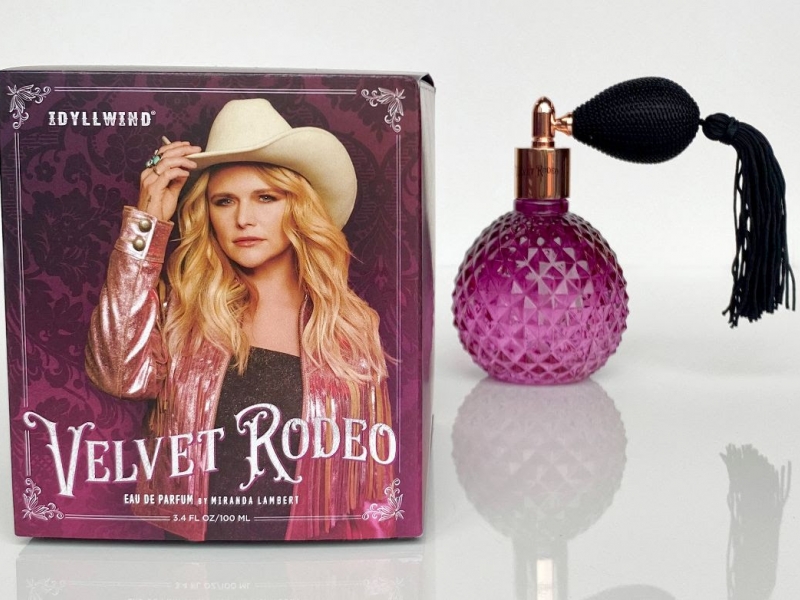 NASHVILLE, Tenn. – Reigning ACM Entertainer of the Year and current CMA Entertainer, Album and Female Vocalist of the Year nominee Miranda Lambert is further embracing the “Velvet Rodeo” with today’s release of a new fragrance available as part of her Idyllwind line at Boot Barn stores nationwide and at Idyllwind.com.

Lambert’s new Velvet Rodeo perfume takes its name from the chorus of her emboldened anthem “Actin’ Up,” featured on her critically acclaimed album Palomino released earlier this year. The warm and sultry fragrance features notes of rich jasmine, spicy violet iris and vanilla suede. It is packaged in a vintage-inspired, diamond-cut glass bottle with a tassle atomizer in a reusable keepsake bottle.

Like her Las Vegas residency, currently underway through April 2023 at Planet Hollywood’s Zappos Theater, Lambert’s Velvet Rodeo perfume takes on “a sunset ride, a velvet rodeo / A Colorado high, a California glow / I want to see the desert from a painted palomino / Senorita need to have a little fun / I'm actin' up.”

“This scent was created for all you strong-spirited, take no prisoners, queen of hearts. Saddle up… and go get ‘em girls!” declares the woman Slate praises as “reveling in the trappings of femininity without allowing them to confine her.”

For more information and to purchase your own, visit Idyllwind.com or stop by your local Boot Barn store.

Her clothing and cowboy boot collection, Idyllwind, is an exclusive brand sold at all Boot Barn stores nationwide and her home goods collection, Wanda June, is available now at Walmart.com. An avid animal lover, Lambert’s MuttNation pet product line is available exclusively at Tractor Supply Co. with proceeds benefitting her MuttNation Foundation, a 501c3 nonprofit that has raised over $6 million since its inception in 2009. The Foundation’s mission is to promote the adoption of rescue pets, support animal shelters across the country, advance spay & neuter and assist with the transport of animals during times of natural disaster.
MirandaLambert.com | Facebook | Twitter | Instagram | TikTok | YouTube
About Boot Barn
Boot Barn is the nation’s leading lifestyle retailer of western and work-related footwear, apparel, and accessories for men, women, and children. The Company offers its loyal customer base a wide selection of work and lifestyle brands. Boot Barn now operates 322 stores in 40 states, in addition to an e-commerce channel www.bootbarn.com. For more information, call 888-Boot-Barn or visit www.bootbarn.com.