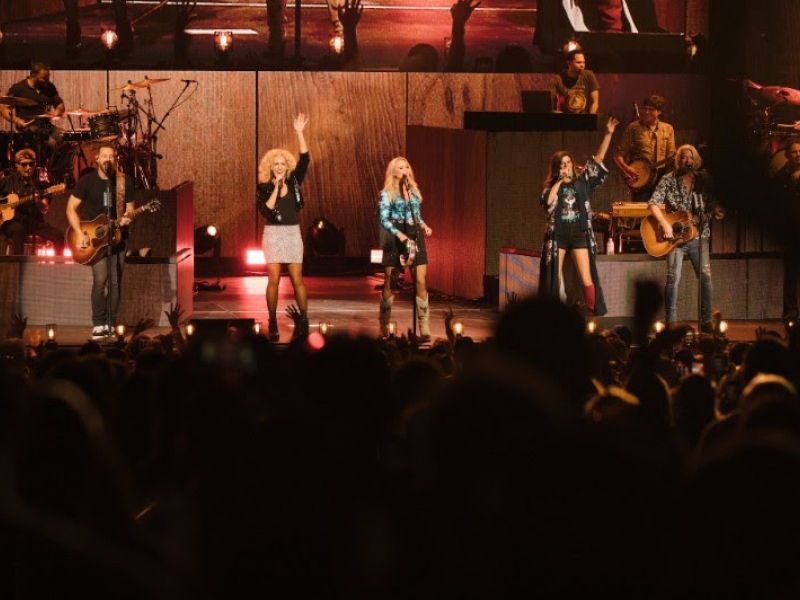 For songwriters, an idea for a song may be nothing more than a notion -- a scribble on a notepad for years before the timing, message and hook come together. So, it's not surprising that Country superstars Miranda Lambert and Little Big Town dreamt about a co-headlining tour for years before finally pulling the trigger on their 17-city The Bandwagon Tour.

Saturday’s show at Hollywood Casino Amphitheatre in Chicago marked the tour’s final destination, but not before giving fans one last night of high-energy hits and powerful collaborations unique to the show.

The Sun-Chronicle described the show as “an evening of country music at its best,” and CMT recalled how “everyone stayed until the ugly lights came on…It was almost as if the fans knew that this was the end, and no one wanted it to be over."

The troupe traversed across the Northeast, Southeast and Midwest regions, playing to at-capacity crowds almost every night and treating them to a once-in-a-lifetime performance of some of the group’s greatest hits—including an hour-long encore that CMT described as feeling “as perfected as it did spontaneous.”

As Pollstar commended Lambert for “her command of the stage and the momentum build of her songs” while declaring that “Lambert at her core is a vocalist committed to the music,” the Pittsburgh Post-Gazette offered that “[Little Big Town’s] four voices coming together are some of the best harmonies that country has to offer” and Pollstar noted that “they are perhaps modern country’s most diverse and musically intelligent act.”

Opening for the quintet was Sony recording artist and country newcomer Tenille Townes, and other special guests included Natalie Hemby, The Steel Woods and Turnpike Troubadours.

Both critically acclaimed artists, Lambert and Little Big Town combine for a total of thirty-six ACM Award wins, twenty-one CMA Award wins and four GRAMMYs. Lambert, who made ACM history when she was named the ACM Female Vocalist of the Year for the ninth consecutive year, was recently announced as the Country Music Hall of Fame ® and Museum’s 15th artist-in-residence and is preparing for the release this fall of her third project with fellow Pistol Annies Angaleena Presley and Ashley Monroe.

About Miranda Lambert:
Vanner Records/RCA Records Nashville singer/songwriter Miranda Lambert is the most decorated artist in ACM history as well as the reigning ACM Female Vocalist of the Year, having been bestowed this honor for nine consecutive years. Her accolades include 2 Grammy Awards, 13 (CMA) Country Music Associations Awards, and 32 (ACM) Academy of Country Music Awards as well as many other honors, including the prestigious Harmony Award from the Nashville Symphony.

The Texas native released her most recent effort, a double album titled The Weight of These Wings in November 2016, which debuted at No. 1 on the Billboard Country Albums chart. She touts six studio albums to her repertoire; Kerosene (2005), Crazy Ex-Girlfriend (2007), Revolution (2009), Four The Record (2011) and Platinum (2014), the latter earning Lambert a GRAMMY Award for Best Country Album, in addition to her previous GRAMMY win for Best Female Country Vocal Performance in 2010 for “The House That Built Me.”  The first song released from The Weight Of These Wings, “Vice,” received multiple Grammy and ACM Award nominations. Lambert’s previous country radio single, “Tin Man”, which she debuted at the 52nd Academy of Country Music Awards last year (2017) and was awarded Song Of The Year at the 53rd Academy of Country Music Awards. www.Mirandalambert.com.

About Little Big Town:
GRAMMY, ACM, CMA, and AMA Award-winning group, Little Big Town -- consisting of members Karen Fairchild, Phillip Sweet, Kimberly Schlapman, and Jimi Westbrook -- first entered the music scene over 19 years ago with hit songs “Boondocks,” “Bring It On Home,” “Good As Gone” and the GRAMMY-nominated “Little White Church.” Their breakthrough albums Tornado and Pain Killer produced multiple #1 singles, including “Pontoon,” “Tornado,” and “Day Drinking,” as well as the history-making, best-selling country single of the year (2015) “Girl Crush.”  Released February 24, 2017, Little Big Town's last studio album, The Breaker, debuted #1 on the Billboard Country Charts and Top 10 (No.4) on the Billboard 200 to critical acclaim, marking the group’s fourth Top 10 debut on the Billboard 200 chart. The album features their GRAMMY-winning, multi-week #1 single, “Better Man,” as well as “When Someone Stops Loving You.” Current single “Summer Fever” is out now and climbing the charts at country radio.

Little Big Town has earned more than 40 award show nominations and in the past five years has taken home nearly 20 awards, including multiple GRAMMY, AMA, People’s Choice, CMA, ACM awards, and an Emmy award. Currently the reigning CMA and ACM Vocal Group of the Year, the Country Music Hall of Fame inductees (2014) went onto receive their star on the Nashville Walk of Fame in 2017. Also in 2017, Little Big Town hosted a sold-out, year-long artist residency at the famed Ryman Auditorium in Nashville -- marking the venue’s first-ever, year-long residency in its 125-year history. The band also recently launched 4 Cellars wine, their first non-musical project as a band, with Browne Family Vineyards. On July 26th The Country Music Hall of Fame and Museum in Nashville launched their new, yearlong exhibit called LITTLE BIG TOWN: THE POWER OF FOUR showcasing the bands powerful and storied 20-year history within the country music community.

For more information on Little Big Town visit LittleBigTown.com or follow them @littlebigtown.