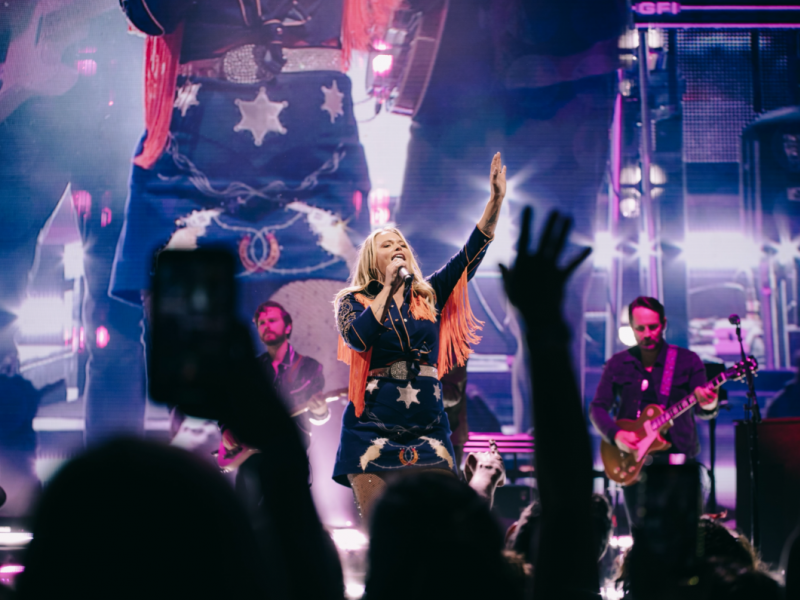 “One of the 21st century’s most ruthlessly consistent discographies” – Variety

“One of the best recorded catalogs in music. Period.” – Paste

“Lambert has established her own American iconography” – NPR

“One of her most career-defining works to date” – GRAMMY.com

FRANKLIN, Tenn. – Opening with the lead track on Palomino, the highly anticipated new album from the woman celebrated in the May issue of Rolling Stone (on stands now) as “country music’s most ambitious artist,” Miranda Lambert let the at-capacity crowd at Thursday night’s show in Nashville know from the start that they were in for a night of musical celebration, living life unbridled, together.

“Got my own kind of country, kind of funky, turn it up” she taunted during the sassy “Actin’ Up” opener, settling in on stage at the scenic FirstBank Amphitheater on the eve of her 15-track, eighth solo album release. Fans were also treated to a live performance of two additional songs off the project available everywhere now; Top 20-and-climbing single “If I Was a Cowboy” and the bluesy-ramble “Strange.”

“I know I’ve thrown a couple new ones at y’all tonight – thanks to singing along to those, by the way,” Lambert shared just 10 songs into a 21-song set. “I was thinking about songs that mean the world to me and the times in my life when I really needed them. I always go back to this one because I’m a sucker for a sad song,” she continued, settling into the spotlight solo with her acoustic Gibson guitar for a poignant rendition of her ACM Song of the Year “Tin Man.”

Fans were surprised midway through Lambert’s set, as Pistol Annies bandmate Ashley Monroe joined Lambert for a touching duet of “Heart Like Mine” before tour special guest The Cadillac Three’s front man Jaren Johnston also joined the party for an all-sing cover of Little Feat’s “Willin’.”

With Variety applauding “her particular gift for navigating the many shades of gray between liberation and longing,” Lambert leaned into that notion of being torn between home and the road that informs so much of her brand-new record during “Settling Down” off her most recent GRAMMY Award-winning album, 2019’s Wildcard.

Lambert also took fans back to her earliest days with her first Top 20 hit, “Kerosene,” which was followed by several other high-energy fan favorites throughout the night, including “Gunpowder and Lead” and “Mama’s Broken Heart.”

Lambert’s unique ability to juxtapose such blazing tracks with a vulnerable and reflective side that has earned her a record-setting 37 ACM Awards to date was also evident as she wowed the sold-out crowd with moving renditions of ballads such as “The House That Built Me” and Double-Platinum No. 1, “Bluebird.”

The evening also marked the first “Fill the Little Red Wagon” drive of the year, with attendees encouraged to donate pet food, treats, supplies and funds for local animal shelter Williamson County Animal Shelter on behalf of Lambert’s MuttNation Foundation. Donation sites will also be set up at each stop on Lambert’s co-headlining The Bandwagon Tour with Little Big Town, kicking off next Friday, May 6 in her home state of Texas.