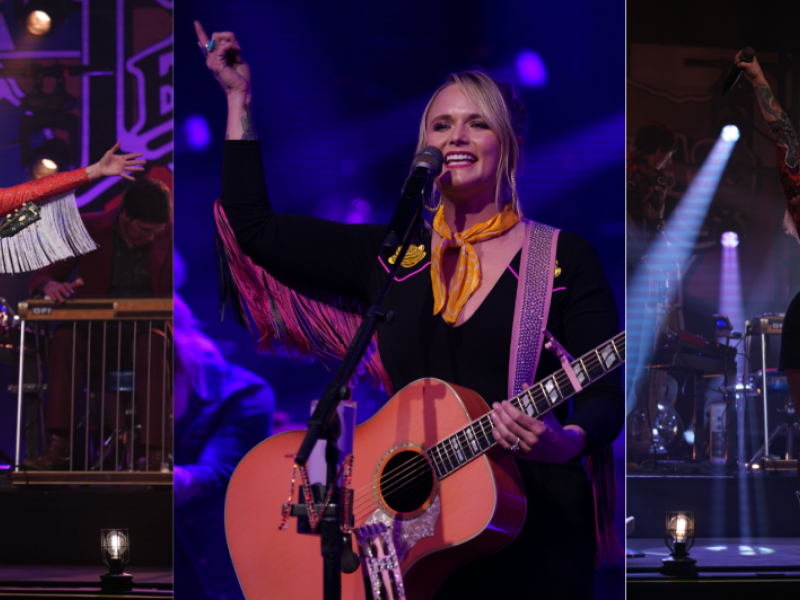 “No matter what I’ve ever done in my career and what I’m still gonna do, somehow I still feel most at home on a barstool under a neon sign,” three-time GRAMMY winner Miranda Lambert told her home state crowd on Thursday night as she kicked off a three-night stand at Billy Bob’s Texas. “I walked in here and I took a little tour around, and I just felt so at home. I remembered why I do this and why I missed y’all’s faces so damn much.”

As part of the venue’s year-long 40th Anniversary celebration, Lambert’s sold-out concerts were a jubilant celebration of a return to live music, with the shows featuring heartfelt singalongs and memorable moments ranging from laughter to even a few tears, as the Thursday evening crowd helped Lambert through the lyrics of “The House That Built Me” when she became overwhelmed with gratitude for being back on stage.

“It felt amazing to be in front of a live audience, sharing that energy and sense of community that we’ve all missed so much,” reflects the most awarded artist in Academy of Country Music history. “I’m so thankful to Billy Bob’s for creating an environment night-after-night to make sure we could all enjoy those moments together, safely.”

In addition to fan favorites such as “Gunpowder & Lead” and “Mama’s Broken Heart” – and even a cover of Alan Jackson’s classic “Don’t Rock The Jukebox” – Lambert also offered a glimpse at her forthcoming project when Jack Ingram surprised her on Thursday evening for a performance of “Tequila Does” off their forthcoming album with Jon Randall, The Marfa Tapes.

Set for release on May 7 via Vanner Records/RCA Nashville, The Marfa Tapes is a collection of intimate, raw songs written and recorded together in the tiny, middle-of-nowhere town of Marfa, Texas. For Lambert, Randall and Ingram, the eccentric outpost in the midst of a vast expanse of nothingness is the perfect place to lose – and find – yourself. Over the past several years, the desolate location has become a songwriting haven for the trio, yielding both massive hits and profound personal growth.

When they returned for five days this past November, though, they came not to write, but to record, capturing a captivating new album inspired by the stark beauty of west Texas and the deep, lasting bonds the three have forged there. Recorded raw and loose with just a pair of microphones and an acoustic guitar, The Marfa Tapes is a stunning work of audio verité; an intimate, unadorned snapshot of a moment in time fueled by love, trust, and friendship.

Watch the video for the first release, “In His Arms,” HERE and pre-order The Marfa Tapes HERE.

About Miranda Lambert
Hailed as “the most riveting country star of her generation” by NPR, Miranda Lambert has spent much of her career defying expectations, balancing massive commercial success with a fiercely independent spirit that’s guided her every step of the way. Over the course of eight studio albums, the Texas native has managed to sell seven million records in the U.S. alone, top the Billboard Country Airplay chart six times, and take home three GRAMMY Awards, 14 CMA Awards, and a staggering 35 ACM Awards (including a record-breaking nine consecutive wins for Female Vocalist of the Year). In addition to her celebrated solo output, Lambert has also released three critically acclaimed albums with Pistol Annies, her chart-topping trio with fellow Nashville songwriters Ashley Monroe and Angaleena Presley.

About Billy Bob’s Texas
Located in the heart of the Fort Worth Stockyards National Historic District, Billy Bob’s Texas first opened its doors in April of 1981. Since then, music stars of all genres and generations have graced the stage for more than 17 million visitors of all walks of life to enjoy live music every weekend, making it an iconic stop in Texas. Not only is Billy Bob’s Texas a country music lover’s dream, but it has also hosted music’s biggest names from all genres over the past 40 years. Ranging from today’s hottest stars such as Luke Combs and Kacey Musgraves to rock legends such as the Styx and the most recognized artists in country music such as Willie Nelson and Johnny Cash, the talent alone speaks to the caliber of the venue. Along with concerts, the unique atmosphere of the “World’s Largest Honky Tonk” also includes live bull riding, and two-step and line dance classes for guests to embrace their inner cowboy.