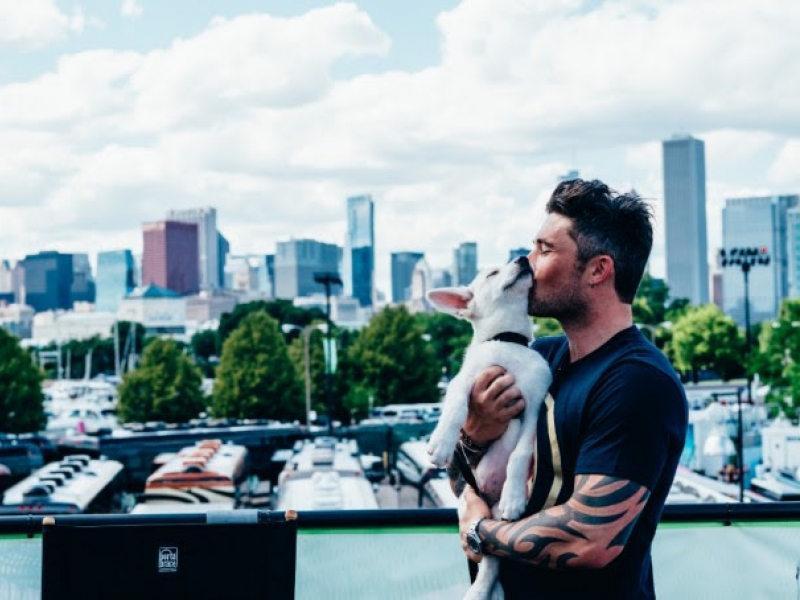 Breakout country artist Michael Ray commits as much to his love for animals as he does his music, and starting today, he is launching a week-long pet supply drive in partnership with the Nashville Humane Association. Fans, friends and community members can donate food, blankets, towels and more to help support the pets displaced by Hurricane Michael. The drive will culminate in a special on-site appearance at NHA on Friday, November 9 at 2:00 p.m. CT. A truck will then dispatch to his native Florida, where it will distribute the provisions to shelters in need.

“Growing up in Florida and feeling what the aftermath of a hurricane is like, there are so many things going through your mind about what needs done and who needs help,” Ray said. “There are often a lot of animals that get separated from their families and end up last on the list of priorities, and since animals have always been important to me and my family, I felt like this donation drive was one way our community could help and support another community.”

Ray has expressed massive support for animal welfare through the establishment of his own pet-based charitable initiative, Wrigley Cares. Named for his husky/shepherd mix, Wrigley Cares provides financial and medical support for rescue animals, service pets and more. Over the span of last year’s headlining “Get To You” Tour, Ray collected more than 100k meals for shelter animals.

WHAT:          Pet supply drive to help support the pets displaced by Hurricane Michael

Fans can catch Ray on the road and on the radio throughout the fall. His current single “One That Got Away,” penned by Nashville hit-makers Josh Osborne, Matthew Ramsey, Trevor Rosen and Jesse Frasure, is Top 30 and climbing on the country charts. The track, which Music Row calls a “bouncy, mid-tempo outing with loads of hooks,” takes a fun and carefree look at a relationship with a person that might be a little out of your league. Check out the Sean Hagwell-directed music video HERE.

Ray recently performed the song on Good Morning America and it has become a staple in his sets on Old Dominion's Happy Endings World Tour, which will continue through the end of the year. The track is one of 11 featured on his sophomore album, Amos, which debuted in the Top 3 on the Billboard Country Albums Chart upon its release this June.

About Michael Ray
Country singer-songwriter Michael Ray was a hit right out of the box, scoring both with critics and on the charts. With Country Aircheck boasting there are "big things on the horizon for Michael Ray" and his live shows lauded by USA Today as simply “lip-smacking good," the Florida native backed up that praise with two number ones from his 2015 self-titled debut album with “Kiss You in the Morning” and “Think a Little Less.”  His sophomore album, Amos, which debuted in the Top 3 on the Billboard Country Charts upon release has already spawned the hit “Get to You” and Top 30 and climbing single "One That Got Away," which All Access declared "an undeniable crowd pleaser." Inspired by his rescue dog Wrigley, Michael Ray created the charitable initiative Wrigley Cares: Helping Animals in Need, collecting donations for local animal shelters at every stop on his “Get To You" Tour in partnership with Zappos For Good. Michael Ray is currently playing as direct support on Old Dominion’s Happy Endings World Tour. Learn more about Ray at MichaelRayMusic.com or follow him on Facebook at facebook.com/MusicMichaelRay, Instagram @michaelraymusic and Twitter @MichaelrayMusic.

About Nashville Humane Association
Nashville Humane Association (NHA) is committed to finding responsible homes, controlling pet overpopulation and promoting the humane treatment of animals.  Incorporated in 1946 to protect the well-being of animals in Davidson County, NHA is one of the oldest service organizations in Nashville. The roots of NHA can be traced back to a society founded in 1887 to protect children from inhumane working conditions and draft horses from mistreatment. Learn more about our mission at www.nashvillehumane.org. Find us on Facebook via @NashvilleHumaneAssociation and Twitter & Instagram via @NashvilleHumane.