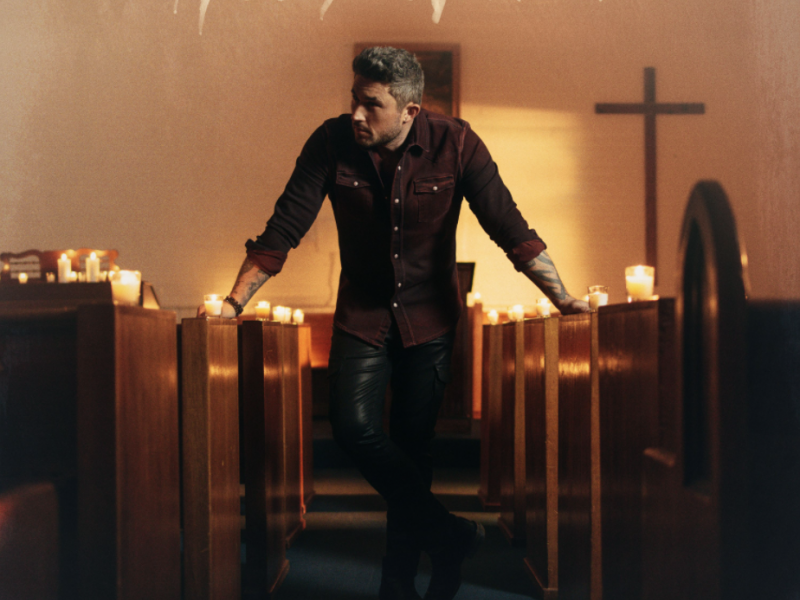 NASHVILLE, Tenn. – Michael Ray grew up in a family compound off a dirt road in the small town of Eustis, Florida, just a few miles from a tiny old country church where Sunday service would be held, where communion often carried over to tall tales of his grandparents’ days running moonshine up the East Coast.

“Back in the day, my family was part of building this little church off a dirt road. It’s the church my grandfather grew up in, my dad grew up in and then pastored, we grew up in it, and now, my sisters are working to rejuvenate it,” shares Ray. “‘Holy Water’ takes me right back to being a boy in that church, sitting in a wooden pew listening to some of the greatest truths I hold onto to this day.”

Written by Ashley Gorley, Hunter Phelps, Ben Johnson and Michael Hardy, “Holy Water” is an engrossing story song that follows a Florida preacher and his lucrative midnight side hustle, while the first lines alone offer a prime example of Ray’s ability to sing mouthfuls of detail with the smooth, unhurried delivery of a veteran storyteller:

Somewhere inside them back Florida pines there’s a town with a Choctaw name
There’s a little white church in a real tight curve on the edge of a field full of grain
Yeah, the preacher was a stand-up man shaking hands every Sunday morning at the door
He loved his congregation, but he ran an operation selling more than the word of the Lord

“I love it when you can hear a song, close your eyes and see exactly what they’re saying,” Ray explains. “I am just naturally drawn to those songs.”

On Higher Education, “Ray found a refuge in the mere act of making music that tells his imperfect story, a story that so many people in this world can certainly relate to during these crazy days,” PEOPLE observes, while American Songwriter emphasizes “Higher Education is shaped by the muse of the man Ray hopes to be, and the lessons he’s learned along the way… inviting his listeners into his world, pulling back the curtain on who he is off the stage.”

The Florida-native has garnered over 1 billion global streams, over 650,000 album equivalents and over 100 million YouTube views. Along with his four No. 1 singles, Ray has a total of six RIAA certifications: Platinum-certified “Think A Little Less,” and Gold-certified songs “Whiskey And Rain,” “Her World or Mine,” “One That Got Away,” “Get To You” and “Kiss You in the Morning.”

About Michael Ray
For Michael Ray, music is his grandfather singing and sweating on a rural Florida stage. It’s the childhood refuge he found during the pain of his parents’ divorce. It’s family and stories, history and hope. Ray says music saved him, but it did even more: Music made him. In five short years, Ray has built an impressive foundation: four No. 1 songs – RIAA Platinum-certified “Think a Little Less,” RIAA Gold-certified “Kiss You in the Morning,” RIAA Gold-certified “One That Got Away” and RIAA Gold-certified “Whiskey And Rain” – plus “Get to You” and “Her World or Mine,” brings his tally to five Gold-certified singles. Ray has garnered over 1 billion global streams, over 650,000 album equivalents, over 100 million YouTube views and has performed at the Grand Ole Opry over 60 times. Now, two hit albums into that all-too-rare blend of critically acclaimed and commercially successful career, Ray has released Higher Education, a seven-song collection produced by GRAMMY-nominated producer Ross Copperman. Proof that heartbroken wallowing can feel good if it swings, “Whiskey And Rain” marked his first multi-week No. 1, cementing Ray as the ideal bridge between vintage country cool and modern country’s best sounds. His next single “Holy Water” goes for adds at Country radio on March 7. Learn more about Ray at MichaelRayMusic.com or follow him on Instagram and Twitter @MichaelRayMusic and Facebook.com/MusicMichaelRay.