MICHAEL RAY PLOTS 2021 JUST THE WAY I AM TOUR 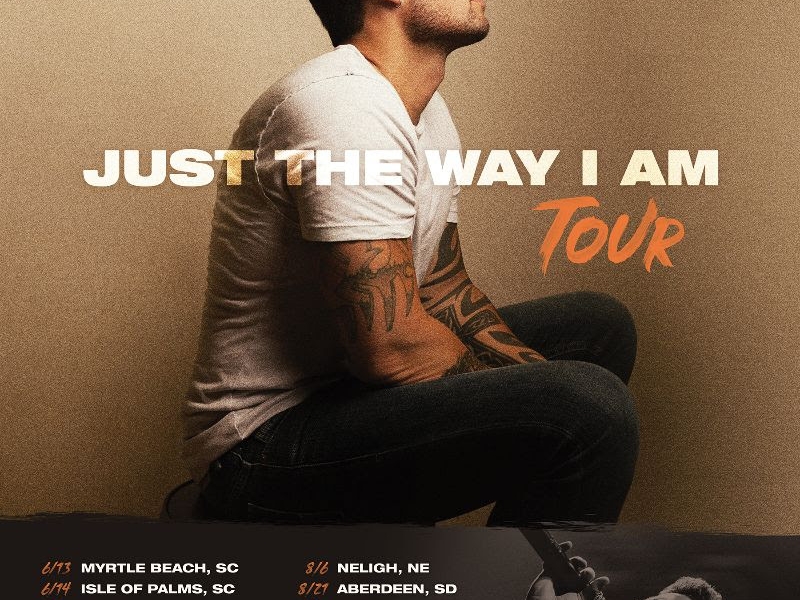 Hot off the heels of his latest release “Picture,” Michael Ray invites fans to join him on his 21-stop 2021 Just The Way I Am Tour, kicking off later this month in Myrtle Beach, S.C. before wrapping Nov. 14 in Fort Lauderdale, Fla. Tickets are available at MichaelRayMusic.com.

“I can’t wait to be back out on the road and be with all of you again,” shares Ray. “There’s nothing better than being with one another and singing the songs that have brought us together over the years, and I’m so excited to share some new songs with you that have come to mean so much to me. Let’s make some memories!”

Written shortly after the unexpected passing of his Uncle Terry and penned with Michael Hardy and David Garcia, “Picture” is about memories made and memories still to make, with American Songwriter sharing the track “captures both the existential crisis and the understanding to celebrate life that often comes during the grieving process,” while MusicRow boasts, “Because one day all you will have is the memory and a photo. A lovely sentiment, a pretty melody and a sincere performance. What’s not to love?”

No stranger to the importance of taking time to reflect, the past year has allowed the Florida-native to reconnect with himself and put pen to paper more than ever before.

“In a lot of ways, I realized that I was lost and putting effort and importance on things that were probably not important,” Ray shared with American Songwriter. “Being able to be back home and hang with family and friends and actually be there…it was a soul cleanser. It sounds weird, but I reintroduced myself to myself in a way. Especially in what we do, it’s so fast paced, and you can’t put someone else’s story and compare it to your own. God made one of you, and you have a story. Don’t compare yourself or be down on yourself when God gave you this journey, and it’s yours. Own it.”

The first of many new tracks from the hitmaker, Ray’s current single “Whiskey And Rain”– praised by Rolling Stone for “embracing a natural throwback country sound”– is currently climbing the charts at country radio as it nears 25 million on-demand streams. A special Warehouse Sessions live version of the track is available now. Listen HERE.

The last 12 months have also seen Ray reach a milestone of garnering over 100 million views on his YouTube channel, with the video for “Her World Or Mine,” starring Chad Michael Murray, capturing over 25 million views alone. Additionally, Ray created his hugely successful livestream series, Honkytonk Tuesday. Showcasing his love for classic country, Honkytonk Tuesday drew in over 700,000 views in 2020 and placed him at No. 32 on the 2020 Pollstar Top 100 Livestreamers year-end list. “Picture” and “Whiskey And Rain” follow two hit albums, three No. 1s and five RIAA Gold-certified singles, including “One That Got Away,” “Think A Little Less” and “Her World Or Mine.” Keep an eye out for more new music, coming soon.

About Michael Ray
For Michael Ray, music is his grandfather singing and sweating on a rural Florida stage. It’s the childhood refuge he found during the pain of his parents’ divorce. It’s family and stories, history and hope. Ray says music saved him, but it did even more: Music made him. In four short years, Ray has built an impressive foundation. Three No. 1 songs – “Kiss You in the Morning,” “Think a Little Less,” and “One That Got Away” – plus “Get to You” and “Her World or Mine,” brings his tally to five Gold-certified singles. The poignant “Her World or Mine” from his sophomore album Amos also produced a video that has captured more than 23 million YouTube views since its debut less than a year ago. Now, two hit albums into that all-too-rare blend of critically acclaimed and commercially successful career, Ray has released “Whiskey and Rain,” the first single off of his upcoming project produced by GRAMMY-nominated song whisperer Ross Copperman. Proof that heartbroken wallowing can feel good if it swings, “Whiskey And Rain” has garnered nearly 25 million streams since its release, cementing Ray as the ideal bridge between vintage country cool and modern country’s best sounds. Catch Ray this summer on his 21-stop Just The Way I Am Tour, kicking off June 13 in Myrtle Beach, S.C. Learn more about Ray at MichaelRayMusic.com or follow him on Instagram and Twitter @MichaelRayMusic and Facebook.com/MusicMichaelRay.