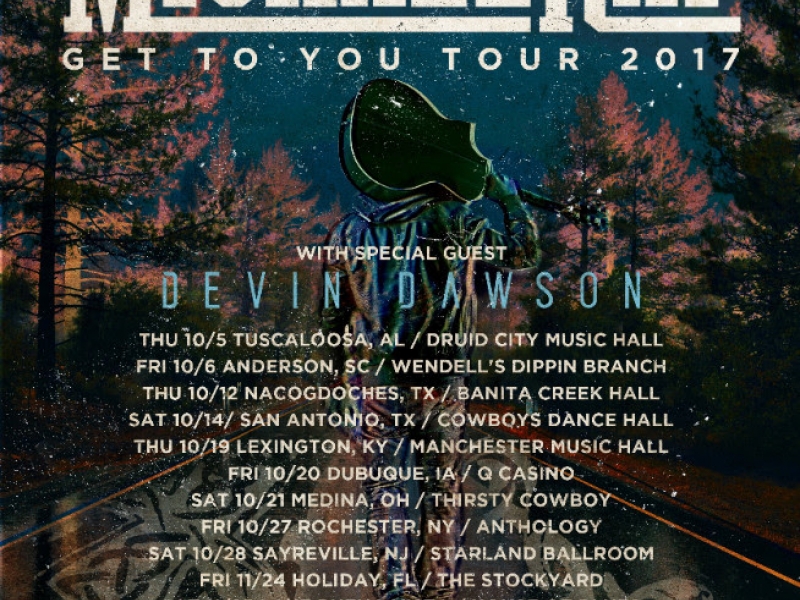 Following two No. 1 singles and a hefty schedule of fair and festival dates, Atlantic Records/Warner Music Nashville’s Michael Ray will launch into the second half of 2017 with his second headlining tour, the aptly-named “Get To You Tour.” “Get To You” is the first single from Ray’s forthcoming sophomore album and of the song, Music Row Magazineproclaims, “This is one terrific record. It sounds like this handsome devil is about to become a Big Star.” Ray will make 15 stops across the country, starting on Thursday, October 5 at Tuscaloosa’s Druid City Music Hall and wrapping on December 9 in the northeast. The chart-topping star has tapped Devin Dawson to join him on select dates.

“I had such an amazing time on the ‘Think A Little Less Tour’ last year as it was really the first opportunity since we started this journey to really get out there and see what our fans wanted to hear and experience,” shares the man who “has proven that he's already resonating with country fans and beyond.” (Billboard). “Since, I’ve been out opening for some incredible acts from Alabama and Sam Hunt to Darius Rucker; I treated every date we played as a chance to learn something – whether it was backstage training or standing sidestage just taking it all in – having those experiences have all led to this tour, and I can’t wait to share it with fans.”

Ray has toured non-stop in 2017 while recording a new album, the first taste of which has made its way to fans--notching the No. 1 most-added slot its first week with current single, "Get To You."

*Devin Dawson will not appear on this show.
**More dates to be added in the coming weeks.

About Michael Ray
March 2017 brought Michael Ray his 2nd No.1 single with “Think A Little Less” off his debut self-titled album. This followed his first No. 1 single, “Kiss You In The Morning” which went to the top spot in just 24 weeks. Ray continues to grow his following, having toured with Sam Hunt, Kip Moore, Brantley Gilbert and Darius Rucker and wrapped up his own first 40 city headlining tour last year.

Michael was raised in Eustis, Florida an hour from Orlando, and grew up hunting alligators and fishing for tarpon at the end of white sand dirt roads. The child of a family full of musicians, he began his professional career before he was a teenager, graduated to the bar scene as soon as he could drive and hasn’t let up on the pedal since. When he decided it was time to move to Nashville, the work Ray had put in began to pay off quickly as he landed a publishing contract with Warner/Chappell Music and a record deal with Atlantic Records /Warner Music Nashville.

In between touring, Michael has been recording his new album this year, with the first single, "Get To You" at country radio now.

About Devin Dawson
Since the release of Devin Dawson’s debut single “All On Me” earlier this year, the California-native has already made his TV debut on Late Night with Seth Meyers, landed his first Grand Ole Opry performance, and received critical praise from a multitude of outlets including ELLE, Entertainment Weekly, Rolling Stone, The Tennessean, HITS Magazine and more. An atypical country artist, Dawson’s approach to music is not different on purpose, it’s different with purpose. Growing up just outside the gates of Folsom Prison, he heard the sirens at night and drew inspiration from Johnny Cash, Alan Jackson, Marvin Gaye and Creedence Clearwater Revival. Pulling from these influences, he began to write in a style that is definitively country. With lyrics full of romance and vulnerability delivered with a distinctive saw-toothed vocal, Dawson draws you in from the first verse and keeps you hooked until the very last chord. His unique mix of organic roots and high-voltage country is showcased masterfully on his forthcoming debut Dark Horse, produced by the daring Jay Joyce (Eric Church, Little Big Town, Brothers Osborne). With a co-write credit on every track, the result will further establish Dawson with the reputation he’s already building: a dark horse set to emerge as one of the most exciting modern storytellers the format has ever seen.