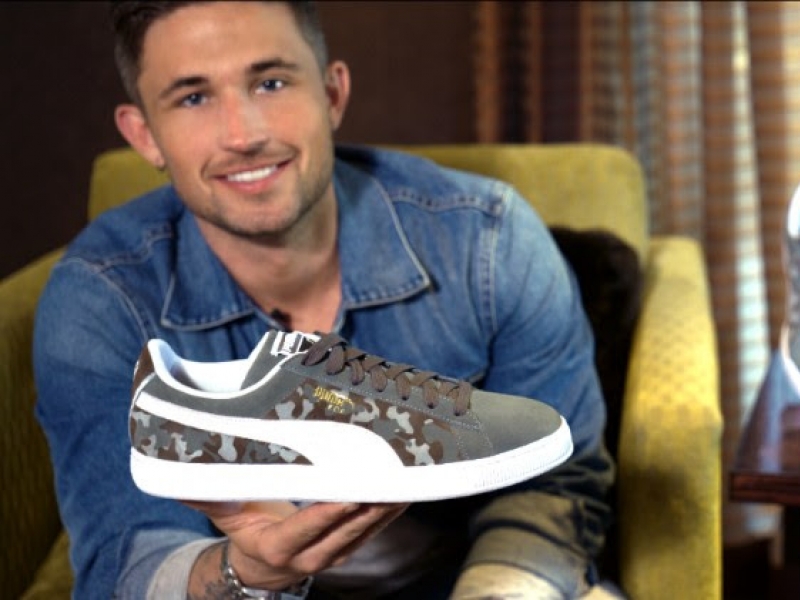 Prior to the release of his sophomore album, Amos, on June 1, Michael Ray is surprising fans with the launch of his custom designed “Wrigley Cares Limited-Edition Puma Classic Suede” shoe. All of the proceeds from the sale of these shoes benefit Ray’s charitable initiative, Wrigley Cares: Helping Animals in Need.

“Zappos for Good has been such an incredible organization to work with on this project,” says Ray who launched Wrigley Cares in 2017. “Not only have they given us the opportunity and the platform to promote a cause I’m so passionate about, but to be able to design a custom sneaker to benefit Wrigley Cares was amazing. They really do look at giving from a unique standpoint that provides value to the fans and the causes they're passionate about.”

Wrigley Cares was inspired by Ray’s rescue dog, Wrigley, whom he adopted at last summer’s Country Lake Shake Festival in Chicago. Ray experienced an outpouring of love from fans who began showing up to concerts with dog toys, food and treats for his new puppy.  This led to the idea of donating those toys to the local animal shelter in whatever city Ray’s Get To You Tour was stopping in. With the help of Zappos for Good, the charitable arm of Zappos, they were able to identify local shelters in need and setting up donation station at each tour stop.

“We love when our customers get to help us deliver WOW and this latest partnership between Michael Ray and Zappos For Good is going to do just that by caring for animals in need all over the country,” said Steven Bautista, Head of Charity at Zappos.com

The announcement of Ray’s shoes comes just in time for the release of his new album, Amos, named in honor of his grandfather. Ray credits Amos with helping to shape him into the man and musician he is today. The 11-track collection features Top 20 single “Get To You,” the emotional heartbreak ballad “Her World Or Mine” and the summer smash “One That Got Away.”

Fans will have the opportunity to continue donating to Wrigley Cares: Helping Animals in Need on select tour dates this fall. For more information, visit michaelraymusic.com.

Amos is available for pre-order now and available everywhere June 1.

About Michael Ray
Country singer-songwriter Michael Ray was a hit right out of the box, scoring both with critics and on the charts. With Country Aircheck boasting there are "big things on the horizon for Michael Ray" and his live shows lauded by USA Today as simply “lip-smacking good," the Florida native backed up that praise with two number ones from his 2015 self-titled debut album with “Kiss You in the Morning” and “Think a Little Less.”  His sophomore album, Amos, named for his grandfather and produced by the legendary Scott Hendricks (Alan Jackson, Faith Hill, Blake Shelton) will be released June 1. The album has already spawned the hit single “Get to You,” now climbing the Billboard charts and praised by Rolling Stone for its “impassioned chorus” and Ray’s impressive vocal range.  Inspired by his rescue dog Wrigley, Ray created the charitable initiative Wrigley Cares: Helping Animals in Need, collecting donations for local animal shelters at every stop on his “Get To You" Tour in partnership with Zappos For Good. This summer Ray hits the road to play a variety of shows and festivals including Carolina Country Music Fest 2018 and will play direct support on Old Dominion’s “Happy Endings World Tour” this fall. Learn more about Ray at MichaelRayMusic.com or follow him on Facebook at facebook.com/MusicMichaelRay, Instagram @michaelraymusic and Twitter @MichaelrayMusic.


About Zappos.com
Established in 1999, Zappos.com, operated by Zappos IP, Inc., has quickly become the leading
destination in online apparel and footwear sales by striving to provide shoppers with the best possible service and selection. Zappos.com currently showcases millions of products from over 1,000 clothing and shoe brands. Zappos.com is also proud to be rated ELITE by STELLA Service and was named a J.D. Power 2011 Customer Service Champion, one of only 40 companies so named in the U.S. More information about the customer service philosophy, unique culture, and job openings can be found at http://about.zappos.com. More information about Zappos Insights, and its business membership program can be found at zapposinsights.com. Zappos.com is a subsidiary of (AMZN) Amazon.com.