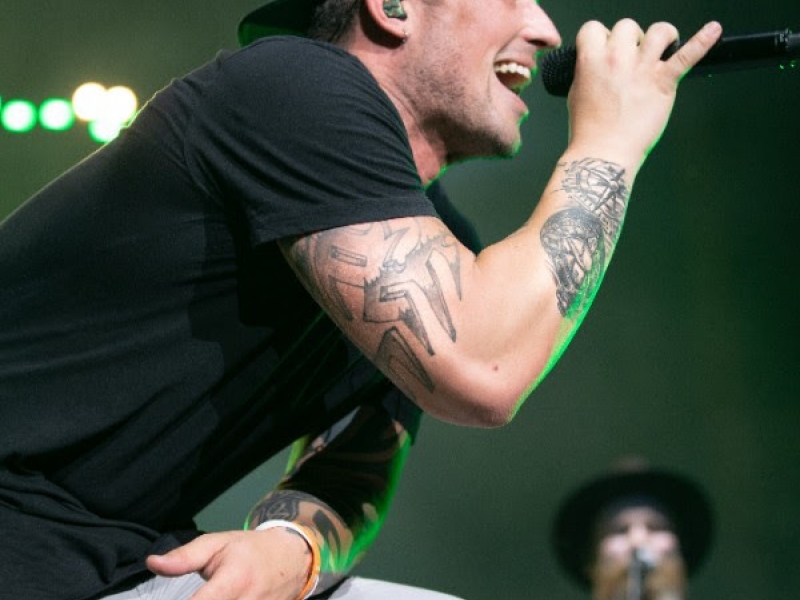 With performances on ABC's "Good Morning America" and "Ellen," breakout country star Michael Ray went coast to coast this past week introducing audiences to his anticipated sophomore album Amosbefore taking the celebration to CMA Fest in Nashville with the biggest country music fans in the nation. The 11-song collection, produced by hit-maker Scott Hendricks, is available now and debuted in the Top 3 on the BillboardCountry Albums Chart.  Amos has already sold more than 49,000 album equivalents to date and boasts upwards of 44 million streams. Fans can relive the biggest moments of the album launch journey here.

“It’s been nearly three years since the last record, and I couldn’t be happier to share Amos with the world,” reflects Ray. “It’s been an incredible experience to see the way fans have connected to the music already. Being able to kick off CMA Fest with a brand new album and see fans singing along has made this the most memorable week of my career. Thank you to everyone that streamed the album, showed up at the signings and came out to the shows!”

Rolling Stone included Ray in their preview of the 20 Best Free Concerts at CMA Fest, calling him “an ace guitar player [who] can rip with the best of them or just as easily scale back to sing a vulnerable, stone-country ballad.” He took on the brand new Ole Red stage at the Blake Shelton & Friends after party following Wednesday night’s CMT Awards, and he returned on the next evening for the Hot Country event presented by Spotify and Opry Entertainment. His jam-packed Thursday also included a special acoustic set at the HGTV Lodge, his second appearance at GLAAD and Ty Herndon’s Concert for Love and Acceptance and a sold-out album release party with fans at Warner Music Nashville.

On Saturday afternoon Ray took over the Chevy Riverfront Stage before wowing Ascend Amphitheater’s at-capacity crowd with a powerhouse performance later that night. The Tennessean declared, “The singer’s music spans semi-traditional to progressive, and he has the moves and attitude to make every note believable,” adding, “The audience lived in the palm of his hand.” The chart-topping entertainer brought to life songs including the No. 1, Gold-certified smashes “Kiss You in the Morning” and “Think A Little Less,” also introducing the audience to new favorites from Amos including set-opener “Fan Girl,” “One That Got Away” and Top 15 single “Get To You.” In a surprise moment before the set, the iconic Randy Travis joined SiriusXM’s Storme Warren on stage to receive the inaugural Cracker Barrel Country Legend Award. Ray followed the presentation with his own tribute, a rendition of Travis’ perennial hit “Forever and Ever Amen.”

Before hitting Nashville for CMA Fest, Ray kicked off Amos release week on Monday morning (6/4) with performances of “One That Got Away” and “Fan Girl” on Good Morning America (ABC). He joined the hosts and a few special canine guests afterward to discuss his charitable initiative, Wrigley Cares, named after his own husky/shepherd mix, which provides financial and medical support for rescue animals, service pets and more. Fans could also catch Ray sing “Get To You” later that afternoon on The Ellen DeGeneres Show, where Ellen welcomed him as “one of the fastest-rising stars in country music.”

Ray led the Amos launch with a never-been-done social takeover with the Grand Ole Opry, which was simulcast on all the Opry digital properties as well as streamed across Warner Music Nashville and Michael Ray’s social media accounts. The experience was particularly fitting as a preview to the album, which draws its name from Ray’s grandfather, who passed away just two months prior to Ray’s debut on the historic stage. It was Amos who inspired the Florida-native’s passion for music, inviting him to play with the family band from the time he was just nine years old and ultimately shaping him into the musician and man he is today.

About Michael Ray
Country singer-songwriter Michael Ray was a hit right out of the box, scoring both with critics and on the charts. With Country Aircheck boasting there are "big things on the horizon for Michael Ray" and his live shows lauded by USA Today as simply “lip-smacking good," the Florida native backed up that praise with two number ones from his 2015 self-titled debut album with “Kiss You in the Morning” and “Think a Little Less.”  His sophomore album, Amos, is out now and has already spawned the hit single “Get to You,” now climbing the Billboard charts and praised by Rolling Stone for its “impassioned chorus” and Ray’s impressive vocal range.  Inspired by his rescue dog Wrigley, Ray created the charitable initiative Wrigley Cares: Helping Animals in Need, collecting donations for local animal shelters at every stop on his “Get To You" Tour in partnership with Zappos For Good. This summer Ray hits the road to play a variety of shows and festivals including Carolina Country Music Fest 2018 and will play direct support on Old Dominion’s Happy Endings World Tour this fall. Learn more about Ray at MichaelRayMusic.com or follow him on Facebook at facebook.com/MusicMichaelRay, Instagram @michaelraymusic and Twitter @MichaelrayMusic.