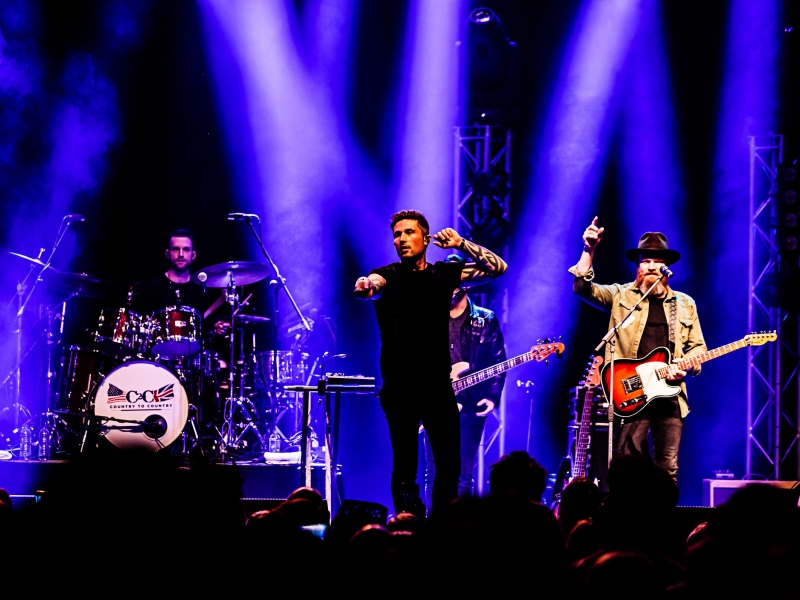 NASHVILLE, Tenn. – Academy of Country Music New Male Artist of the Year nominee Michael Ray took a break from his headlining U.S. Nineteen Tour over the first two weeks of March to travel around the world. Ray performed his first shows in the U.K. at the C2C (Country to Country) Festival in London and Glasgow before boarding a plane for Australia and returning to the CMC Rocks Festival in Queensland.

Describing his Spotlight Stage set at the O2 Arena in London, Entertainment Focus said “Ray made a real impression with C2C goers. He’s the real deal; strong vocals, plenty of confidence and the talent to back it up.” Performing multiple full-band sets across the weekend that included his current single “One That Got Away” (video here), the Florida-born singer-songwriter emerged as one of the standout acts of the festival.

Continuing his international performances on another continent, Ray returned to Australia’s CMC Rocks Festival in Queensland where he celebrated his current single, “One That Got Away,” single reaching the Top 5-and-climbing on Mediabase/Country Aircheck.

Ray expressed appreciation to his fans following two memorable performances at CMC Rocks Festival. “I can’t believe how incredible this year has been and the life you all have given ‘One The Got Away’ all around the world,” said Ray. “For me, this year is about moments, slowing down and living in them, so if you need me I will be living in this moment over and over for a while! Thank y’all for showing up, stealing the show and making my dreams come true."

About Michael Ray:
Country singer-songwriter Michael Ray was a hit right out of the box, scoring both with critics and on the charts. With Country Aircheck boasting there are “big things on the horizon for Michael Ray” and his live shows lauded by USA Today as simply “lip-smacking good," the Florida native backed up that praise with two number ones from his 2015 self-titled debut album with “Kiss You in the Morning” and “Think a Little Less.”  His sophomore album, Amos, which debuted in the Top 3 on the Billboard Country Charts upon release has already spawned the hit “Get to You” and Top 5-and-climbing current single “One That Got Away,” which All Access declared “an undeniable crowd pleaser.” Inspired by his rescue dog Wrigley, Michael Ray created the charitable initiative Wrigley Cares: Helping Animals in Need, collecting donations for local animal shelters at every stop on his “Get To You” Tour in partnership with Zappos For Good. Michael Ray is currently headlining his Nineteen Tour, before setting out to play a number of fairs and festival dates this summer, including Tortuga Music Festival, Stagecoach, Country Thunder and Faster Horses. Learn more about Ray at MichaelRayMusic.com or follow him on Facebook at facebook.com/MusicMichaelRay, Instagram @michaelraymusic and Twitter @MichaelrayMusic.