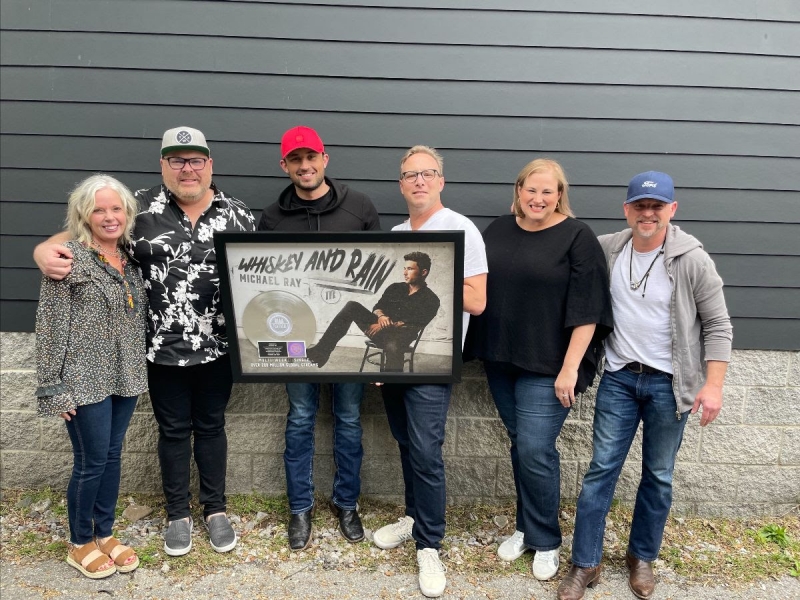 “Holy Water” Continues to Climb the Charts at Country Radio

Ray Hits the Road This Summer And Joins Lee Brice On the
Label Me Proud Tour This August; Tickets On Sale at MichaelRayMusic.com

“When I first heard ‘Whiskey And Rain,’ I connected with the idea of letting yourself really live in a moment where it can wash over you,” shares Ray. “To say I’m proud of this song would be an understatement. I’m very grateful that it’s found a home in the hearts of fans. I couldn’t do this without them or the team I have behind me.”

Written by Josh Thompson and Jesse Frasure, “Whiskey And Rain” quickly garnered attention from critics, with Rolling Stone dubbing the track as “equal parts Ronnie Milsap and Gary Allan” while Billboard called it “a throwback to brooding songs from the ‘80s and ‘90s” with “solid production by Ross Copperman highlighting Ray’s vulnerable delivery.”

The track also caught the ear of critic Grady Smith, who shared “Whiskey And Rain” as his No. 2 pick in “The 10 Best Hit Country Songs of 2021,” noting that the “fresh, radio-friendly, modern but still a little bit traditional country production” made him “take a second look at Ray and think maybe there’s more to what this guy wants to say musically.”

“Holy Water,” the second single from Higher Education, continues to climb the charts at Country radio. Written by Ashley Gorley, Hunter Phelps, Ben Johnson and Michael Hardy, the first verse of “Holy Water” offers a prime example that Ray “undoubtedly knows his way around a country song,” showcasing his ability to sing mouthfuls of detail with the smooth, unhurried delivery of a veteran storyteller, while the chorus is “a high-powered anthemic section…encased in a singalong, descending melody,” shares Billboard.

On Higher Education, “Ray found a refuge in the mere act of making music that tells his imperfect story, a story that so many people in this world can certainly relate to during these crazy days,” PEOPLE observes, while American Songwriter emphasizes “Higher Education is shaped by the muse of the man Ray hopes to be, and the lessons he’s learned along the way… inviting his listeners into his world, pulling back the curtain on who he is off the stage.”
Ray is set to perform a slew of festival and headlining dates this summer before re-joining Lee Brice on the Label Me Proud Tour. For dates, tickets and additional information go to MichaelRayMusic.com.

About Michael Ray
For Michael Ray, music is his grandfather singing and sweating on a rural Florida stage. It’s the childhood refuge he found during the pain of his parent's divorce. It’s family and stories, history and hope. Ray says music saved him, but it did even more: Music made him. In five short years, Ray has built an impressive foundation: four No. 1 songs – RIAA Platinum-certified “Think a Little Less,” RIAA Platinum-certified “Whiskey And Rain,” RIAA Gold-certified “Kiss You in the Morning,” RIAA Gold-certified “One That Got Away” – plus “Get to You” and “Her World or Mine,” brings his tally to four Gold-certified singles. Ray has garnered over 1 billion global streams, over 650,000 album equivalents, over 100 million YouTube views, and has performed at the Grand Ole Opry 65 times. Now, two hit albums into that all-too-rare blend of critically acclaimed and commercially successful career, Ray has released Higher Education, a seven-song collection produced by GRAMMY-nominated producer Ross Copperman. Proof that heartbroken wallowing can feel good if it swings, “Whiskey And Rain” marked his first multi-week No. 1, cementing Ray as the ideal bridge between vintage country cool and modern country’s best sounds. His latest single “Holy Water” is climbing the charts at Country radio now. For more information, visit MichaelRayMusic.com or follow him on Instagram and Twitter @MichaelRayMusic and Facebook.com/MusicMichaelRay.