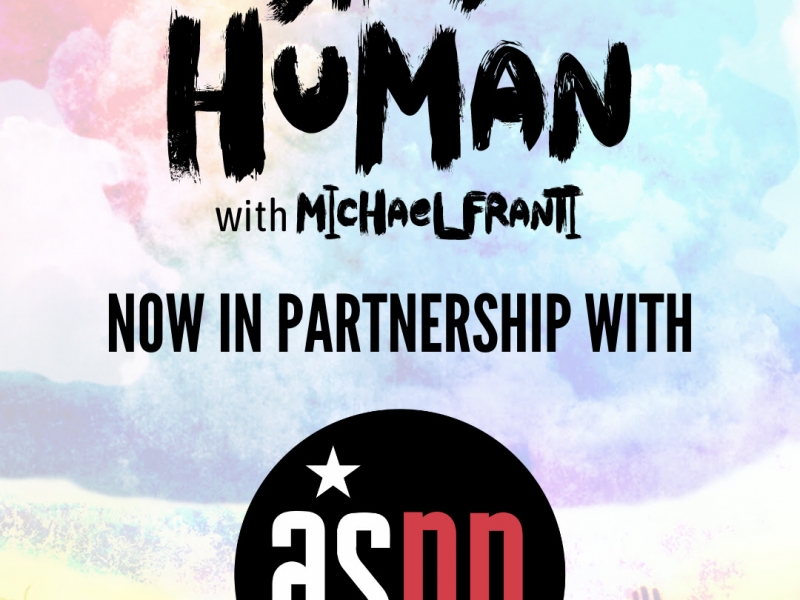 UBUD, Bali – Globally-recognized musician and activist Michael Franti, revered for his high-energy live shows, inspiring music, worldwide philanthropic efforts and the power of his optimism, has partnered with American Songwriter Podcast Network for the Stay Human podcast, initially launched independently by Michael Franti and Activist Artists Management in May of this year, with new episodes released every week. Find Franti’s Stay Human podcast on American Songwriter Podcast Network, and wherever you listen to podcasts.

“I’m super excited to be involved in the American Songwriter Podcast Network, because I fell in love with songwriting when I was a teenager,” shares Franti. “I love to hear the stories of how artists find new ways to create, to speak what’s in their heart, and to share it with others. I think if you listen to any of the podcasts on this network, whether you’re a songwriter or not, you are going to find food for your soul and mind — and laughter for your heart.”

“Michael Franti's Stay Human podcast is a perfect fit for the American Songwriter family,” remarks American Songwriter COO Dan Wise. “His in-depth conversations are inspiring, insightful and bring a positive energy that is hard to find anywhere else.”

“Michael Franti offers a unique frame of reference to his projects, activism, and songwriting that is felt and heard in his music, poetry and podcast,” states American Songwriter Editor-in-Chief Dallas Jackson. “Signing Stay Human to the American Songwriter Podcast Network is an exciting partnership for us as we continue our mission to become genre-agnostic and shine the light on the music space as a whole.”

Similar to his award-winning documentary of the same name, Franti has traveled around the world for decades, meeting incredibly inspiring people from musicians to cultural creatives – people of all walks of life – including guests Celeste Barber, Ziggy Marley, Lukas Nelson, Pat Monahan of Train, Natasha Bedingfield, HIRIE, Bert Jacobs of Life Is Good, and Andy Bernstein of HeadCount, among many more.

“The Stay Human podcast is all about the belief that I have that there’s no one you wouldn’t love if you knew their story,” Franti elaborates. “We have guests from all walks of life, but in particular, people who are cultural creatives — people who through their music, their art, their entrepreneurship, or their activism are doing things to actively change the world. We think you are going to love it, and I can’t wait for you to give us a listen and let us know what you do to stay human.”

Last month, with a track NPR declares “spreads sunny cheer, adding melody and rhythm to a ‘we’re all in this together’ moment,” Franti earned his third career No. 1 at radio with “I Got You,” the lead single from Work Hard And Be Nice, topping the Billboard Adult Alternative chart and marking his first No. 1 since 2010 with “The Sound of Sunshine,” as well as his ninth Top 25 single in the format.

In August, Franti announced three more dates for his Stay At Home Concert World Tour after performing from Soulshine Bali in three shows over the summer, connecting with his Soulrocker collective, with groups of fans, friends and entire households joining together for an estimated audience of 10,000 per show.

Each show offers a different experience with themes: Soulrocker Halloween Scream Oct. 30 and 2020 Harvest Ball Celebration Nov. 21. The first 500 ticket buyers will have the option to join a “Backstage” Zoom party room in addition to viewing the livestream. When purchasing tickets, fans can choose to attend an individual show for $22 or purchase a bundle for all three shows for $60. Attendees can also add on brand new merchandise for an additional price. A portion of each ticket will be going to charity as well. Tickets for Oct. 30 and Nov. 21 at 6 p.m. PT / 9 p.m. ET are available for purchase HERE.

Michael Franti & Spearhead’s Work Hard And Be Nice, pegged by American Songwriter as a “brassy, low-key slice of optimism” and “a performance that will undoubtedly soothe,” was released June 19 with lead single “I Got You” making its way onto NPR’s “Heavy Rotation: Public Radio’s Favorite Songs of 2020 (So Far).” Work Hard And Be Nice is available everywhere now.