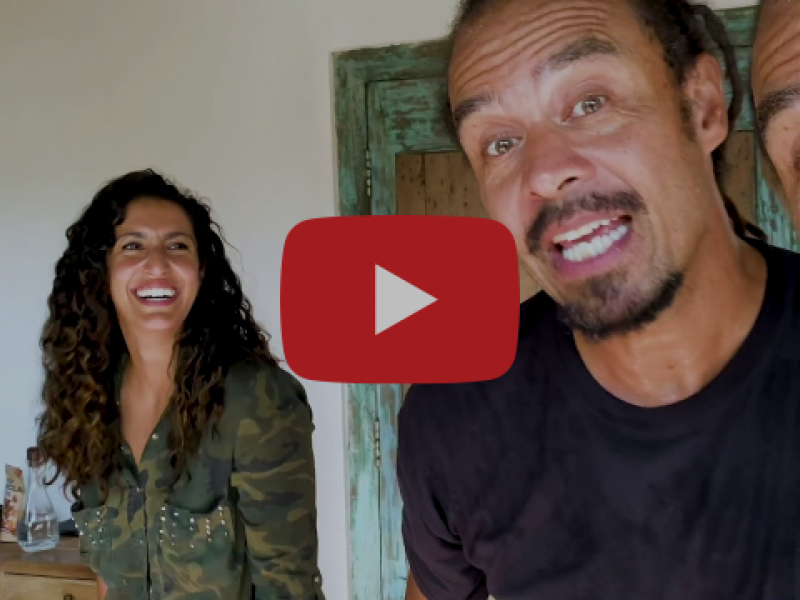 Musician and globally-recognized artist Michael Franti releases the first single “I Got You,” along with an accompanying music video directed by Franti and filmed while quarantined in Bali, from upcoming 11th studio album Work Hard And Be Nice, set for release on Thirty Tigers June 19, 2020. Stream or purchase “I Got You” and pre-save/pre-order Work Hard And Be Nice HERE.

Directed and produced by Franti, the music video for “I Got You” was filmed while quarantined in Ubud, Bali and stars Franti, wife Sara and baby Taj.

“We were challenged to create a video for a song about having a partner who helps you get through the darkest moments of life and helps you ‘love deeper, fly higher, see clearer, burn brighter, than we ever did before,’ while being stuck on lockdown,” Franti reveals. “Because we didn't have the benefit of changing locations to shoot scenes that match lines, we worked over one hundred hours, after we shot the video on an iPhone, to edit the effects painstakingly in frame by frame.

“Even though the song isn't directly about COVID quarantining, its unique style was born out of the fact that all of us around the word are having to do the best we can, with the limited resources we have during home isolation.”

Franti recently celebrated the announcement of Work Hard And Be Nice on Earth Day, hosting a screening of his award-winning film “Stay Human” on YouTube and releasing two additional songs, “How We Living,” a uplifting track about taking the time to celebrate the fun side of life, and “I’m On Your Side,” an anthem of solidarity. Watch the video for “I’m On Your Side” HERE.

The 17-song album, available to pre-save and pre-order now, started off as an idea: That it’s important in this time of division in the world to Work Hard And Be Nice To People.

“Before there was a song and an album by the title, I had a discussion with our band and crew that our mantra on tour was going to be 'work hard and be nice to people.' We then made a t-shirt, and it very quickly became our top-seller! It was so popular that I decided to write a song about the concept,” Franti reveals. “Every song on the album is about the power of optimism to get us through our darkest moments and find the light in our loves, lives and for the planet.”

“I collaborated with many different incredible songwriters and it was amazing to hear how all of them understood completely the idea of how important it is for people to have ease of heart in these troubled times,” he continues. “The need for emotions to be able to pass effortlessly as they arise. Music helps with that, and sometimes it brings out feelings we never even knew existed. As I set out making the record, I hoped that it would move people’s hearts and bodies and inspire people to take on the great challenges the world faces today, with courage, love and bold optimism!”